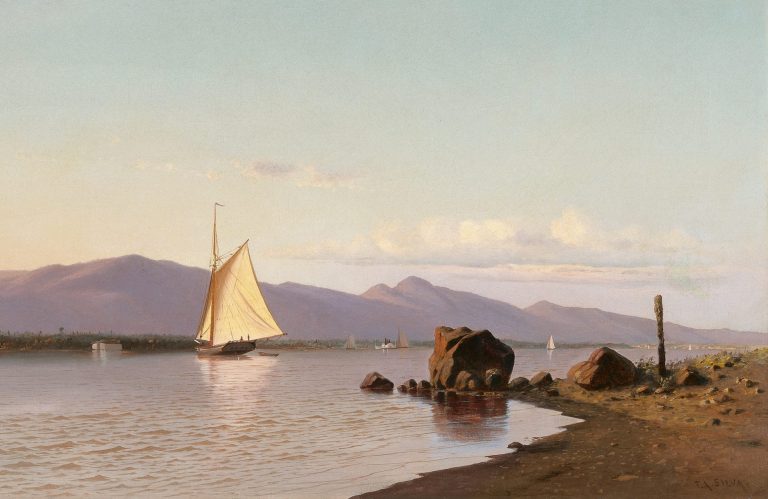 The wind gently blows on the water of the lapping shore, and the light gently glows on the sailcloth of the floating boat. All is gentleness and harmony. All is light and luminosity. Francis A. Silva captures such a relaxing and peaceful scene in his Kingston Point, Hudson River. Discover the story of the painting.

Francis A. Silva painted Kingston Point, Hudson River circa 1873 when the Hudson River School was extending into its second generation of artists. The wild and untamed landscapes of the 1830s had mellowed into the calm and tamed landscapes of the 1870s. Dynamic artists like Thomas Cole had been supplanted by their calmer counterparts like Francis A. Silva. Americans appreciated peaceful artists because they were ready to enjoy life after the hardships of the Civil War. What better way to enjoy life than to surround themselves with enjoyable images of natural beauty? Kingston Point, Hudson River is an image of how enjoyable life can be for anyone.

The first-generation artists of the Hudson River School were obsessed with Manifest Destiny and the moral dilemmas it created. Manifest Destiny was the belief that the expansion of the United States across the North American continent was both logical and assured while disregarding Indigenous populations. It had questionable morals and intentions.

However, by the 1870s Manifest Destiny was no longer the moral dilemma of the day. The West Coast of the United States had been reached and occupied. There was no longer a western frontier. The United States had reached its westernmost natural boundary on the Pacific Coast. The Hudson River School artists of the 1870s, like Francis A. Silva, returned to the East Coast of New England for inspiration and painted scenes like Kingston Point, Hudson River.

Surviving the war, we can believe Silva wanted to throw himself into the beautiful pleasures of life and capture them on canvas. Kingston Point, Hudson River could be an encapsulation of this theory. Life is too easily filled with war and ugliness, why not capture some of its peace and beauty? The wild and untamed nature of the earlier Hudson River School is now less wild and less untamed. It is more approachable, more enjoyable, and almost takes on the appeal of visiting a state park. It still has elements of the wild, but it is not savage survivalism.

A more harmonious blend of civilization and nature is found in Kingston Point, Hudson River. The painting has a naturally low horizon, which allows ample amounts of blissfully blue sky. The low viewpoint suggests a person standing on the shoreline in the foreground. The viewer is on the water’s edge and experiences the same wind and light that affects the boat, rocks, and mountains. The spectator is part of this delightful experience. The breeze blowing the boat’s sails and the water’s surface also blows the viewer’s face. The lapping water and fluttering sails are heard by the sailors and the viewer. Romance and relaxation radiate throughout Kingston Point, Hudson River.

Francis A. Silva painted Kingston Point, Hudson River with the detailed skill of a virtuoso. However, his technique masks his humble origins as a self-taught artist and includes the different light effects and atmosphere upon his subjects. Rather than attempt dramatic vegetation and geologic formations, the artist focuses on the serene and tranquil. Like Canaletto, Silva depicts how light interacts with the ethereal elements of air and water and the solid elements of cloth and stone. Luminosity flows throughout Kingston Point, Hudson River and binds Francis A. Silva as a painter of light.

Imperceivable but important. Kingston Point, Hudson River has the visual appeal of timelessness, calmness, and peacefulness all bathed in warm light. We would like to believe it is a respite for a war-torn soul. It is found in the Museo Nacional Thyssen-Bornemisza of Madrid, Spain. The warmth of the Spanish sun can now complement the warmth of Kingston Point, Hudson River. Peace can be found anywhere.