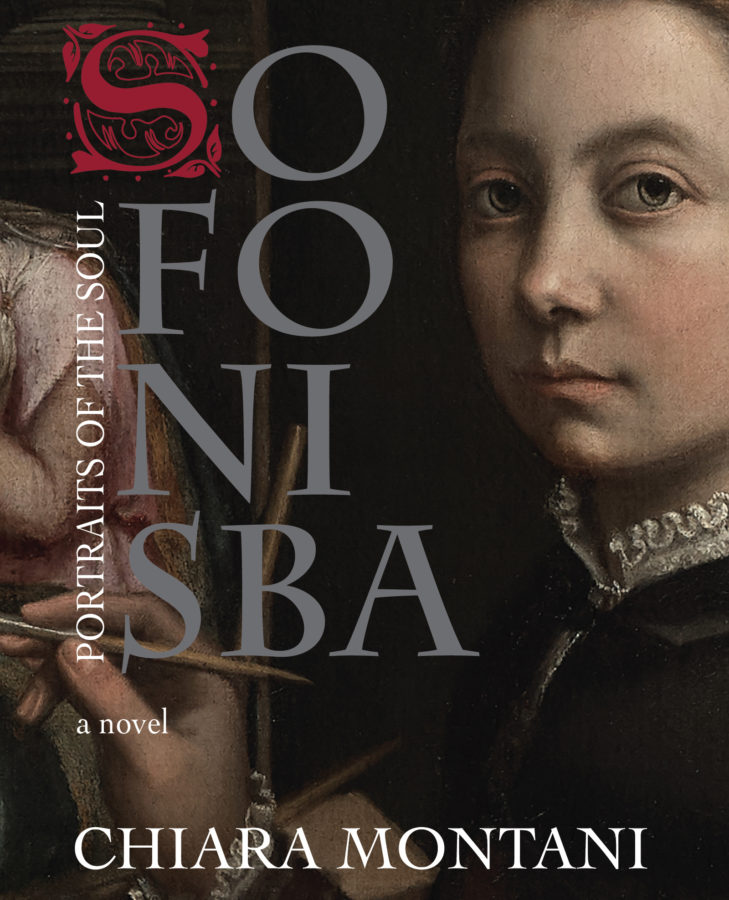 Sofonisba, Portraits of the soul is a book by Chiara Montani about the life and work of the Italian artist Sofonisba Anguissola. Sofonisba was an artist during the Renaissance in Italy and Spain. She was the first woman of her time to dare to pursue her dream to become an artist. Plus, she was the first woman to be accepted as an art student. Without further ado, let’s jump straight into the review!

Sofonisba, Portraits of the Soul is set in 16th century Europe. Sofonisba is on the deck of a galley, where she attempts to take her life. It is an interesting start for the book. From that point on follows the narrative of her life. The reader learns all about how she grew up. Sofonisba was a child of a noble but poor family. Her father was a promoter of the arts and helped her find a teacher. Her mother was very strict and prudish. She didn’t really approve of Sofonisba’s unique character. Sofonisba also had many sisters she was close to. In fact, they all painted together and Sofonisba was a great inspiration to them.

Sofonisba soon became a student of Bernandino Campi. He was the only artist who accepted a female student at the time. He taught her all about drawing and painting. So, next to him, she learned how to use the light and shadow, how to observe and distinguish shapes, and how to mix the colors she would use.

Sofonisba and Bernandino became friends and they painted each other’s portraits. Her artistic talent amazed Bernandino. Sofonisba’s reputation soon reached the Spanish court. As a result she was invited to be a lady-in-waiting to Queen Elisabeth (or Isabel in the book) and her personal painting tutor.

A beautiful friendship bloomed between the two women. Furthermore, Sofonisba painted the portraits of the royals, such as King Philip II of Spain, as well as other nobles of the time.

Shortly after Queen Elisabeth’s death, Sofonisba was forced into marriage. She was already in her 40s, too old to be unwed in that era. She married Fabrizio Moncada Pignatelli, a Sicilian nobleman. On one hand, he was supportive of his wife’s artistic ability but on the other he was jealous of her professional activity as a painter. He later died under very questionable circumstances.

Hence Sofonisba decided to return to her homeland, Cremona. Her brother, Asdrubale, came to Palermo to escort her back. On the way, she fell in love with Orazio, captain of the galley that would take her home. Despite her brother’s disapproval, they got married in Pisa and lived happily ever after. Sofonisba passed away in 1625, at the of 93.

Montani makes it clear that the book is a work of historical fiction. This means that it is based on true, historical persons and events but there are also some who are fictional. In addition, the writer has interpreted certain things in her own way.

To be thorough, Montani notes her historical sources, which is really helpful. If you want to look further into Sofonisba’s story, there are plenty of historical works cited. She also talked to historians and scholars in order to better understand the works of art. Likewise her descriptions of all the mentioned art works are wonderful; they are vivid and detailed. They make the reader feel like he or she has the piece in front of them even though there are no images in the book.

After all her scientific research, Montani also interprets Sofonisba’s feelings. Again, she achieves her goal by profiling the artist wonderfully. Sofonisba seems to be a very sensitive person, restless, uncomfortable in her skin. She is an open-minded woman, living in a very puritanical society.

The writer also succeeds in portraying a vivid image of Italian and Spanish societies in that era. First of all, women had to endure many cruel limitations, especially for the restless Sofonisba. The reader can easily observe several themes; the fact that women were not allowed to pursue a career in the arts (let alone get paid for their work). As a result, Sofonisba’s clients didn’t pay her for her services. Instead, they gifted her precious objects like jewelry and fabrics. Moreover, Sofonisba was actually the court painter in the Spanish palace. Sadly she was never publicly recognized as such. This was actually one of her biggest frustrations.

There was still the fact that my rank and position as a woman prevented my status as a painter from being acknowledged and this confined me to a hybrid position which was never clearly defined. It also meant that my portraits, which it was not considered appropriate for me to sign, could only be paid for with gifts and favours.

Besides these issues, there was also the technical matter of learning anatomy. It was a huge taboo at that time for a woman to draw the human body. Bernandino never taught Sofonisba human anatomy; she learned it by herself.

To that end, Renaissance society expected women to behave ‘properly’. This means that they shouldn’t express their emotions or any unconventional opinions, like disagreeing with the preaching of the Catholic Church. Women were also expected to provide offsprings for their husbands, preferably males, as they were considered a blessing. A woman belonged to her husband, as a piece of property, and he held rights over her body and life.

Montani outlines the strictness of the Spanish Court, the terror of the Inquisition and the confinement of Sofonisba in a very extensive way.

The story has incredible flow, both in English and Italian. There are certain words and expressions which might seem a bit odd because they are a part of a certain vocabulary. That is, the vocabulary is a bit archaic to fit the era of the story. However, it isn’t very difficult to understand and is actually enjoyable to read.

There is one problem in the English translation, however. There are certain parts which don’t make sense grammatically or syntactically. In the Italian version, which is the native language of the writer, the text is flawless. In the English version, there are some points where the text gets slightly confusing and unclear.

One thing I really loved about the book is that it mentions other artists like DaVinci, Michelangelo (he was a great admirer of Sofonisba’s paintings), Titian and Raphael. It also mentions Plato and his philosophy about what is real and what is not, which is quite interesting. (Plato was one of the major philosophical inspirations of the Renaissance.) This proves that Chiara Montani did a lot of research before writing the book.

In one chapter Queen Elisabeth tells Sofonisba that she admires the way she paints because her portraits look like they are alive. Sofonisba answers that she observes the essence of each person. Therefore, she creates portraits of souls. So, this book offers a variety of portraits of the same soul. The portrait of the daughter, the painter, the friend, the teacher, the woman, the wife.

I couldn’t recommend this book enough. It is so interesting and it gives the impression that the reader is watching a movie or TV series. Even though there are some small issues in the English translation, they don’t take away the story’s charm.

To learn more about Chiara Montani, be sure to visit her website. She is also an artist (a good one at that) and if you subscribe you will get a pdf file with the majority of the Sofonisba Anguissola’s works of art. Plus, she is such a nice person and always ready to have a chat!

Dear readers! We are looking for new authors for DailyArt Magazine. If you’d like to write about art in English and start publishing your texts, drop an email to [email protected]