The Legend Of The Death Of Raphael

Raphael Santi, one of the greatest Renaissance painters died on this day, on Good Friday in 1520. He was only 37 years old and at the peak of his powers. So, what's the legend I've mentioned in the title of this article? Giorgio Vasari, the lead gossip boy of his times recounts in his book "The Lives of the Artists" that Raphael died of... too much sex. There was an easy Medieval explanation to this - the human body is controlled by humours, health depends on a balance of humours, and Raphael's was destabilised by too much action in bed. The artist fell into fever, didn't tell his doctors what was its cause and they gave him a wrong cure, which killed him. The illness lasted fifteen days, and luckily Raphael was composed enough to confess his sins, receive the last rites, and to put his affairs in order. He dictated his will, in which he left sufficient funds for his mistress's care, entrusted to his loyal servant Baviera, and left most of his studio contents to other artists, Giulio Romano and Penni. At his request, Raphael was buried in the Pantheon and his funeral was extremely grand, attended by large crowds. The inscription in his marble sarcophagus sounds: "Here lies that famous Raphael by whom Nature feared to be conquered while he lived, and when he was dying, feared herself to die." But who was the unlucky lover, with whom Raphael spent his last happy night? Raphael never married, but in 1514 became engaged to Maria Bibbiena, Cardinal Medici Bibbiena's niece. He wasn't very enthusiastic about this marriage - Maria in the end died in 1520 as a maiden. Raphael is said to have had many affairs, but a permanent fixture in his life in Rome was beautiful "La Fornarina", Margherita Luti, the daughter of a baker (fornaro) named Francesco Luti. That's her portrait: [caption id="attachment_4340" align="aligncenter" width="620"] 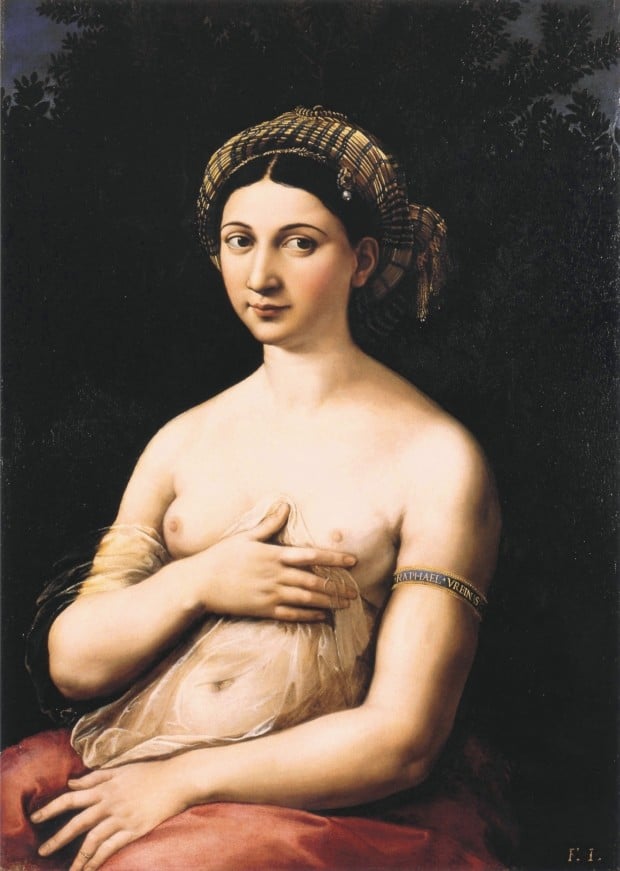 Raphael, La Fornarina, 1518-20, Galleria Nazionale d'Arte Antica[/caption] Of her, Flaubert wrote, in his Dictionary of Received Ideas, "Fornarina. She was a beautiful woman. That is all you need to know." Margarita is not mentioned by Vasari but is named twice in sixteenth-century marginalia to the second edition of his Lives of the Most Excellent Painters, Sculptors, and Architects. In a letter of 1806, Melchior Missirini recounted the tale of their first meeting, of how Raphael fell in love after watching her as she bathed her feet in the Tiber in the garden beside his house in Trastevere, only to discover that "her mind was as beautiful as her body". Of course, it might be only a legend. But it works on imagination!