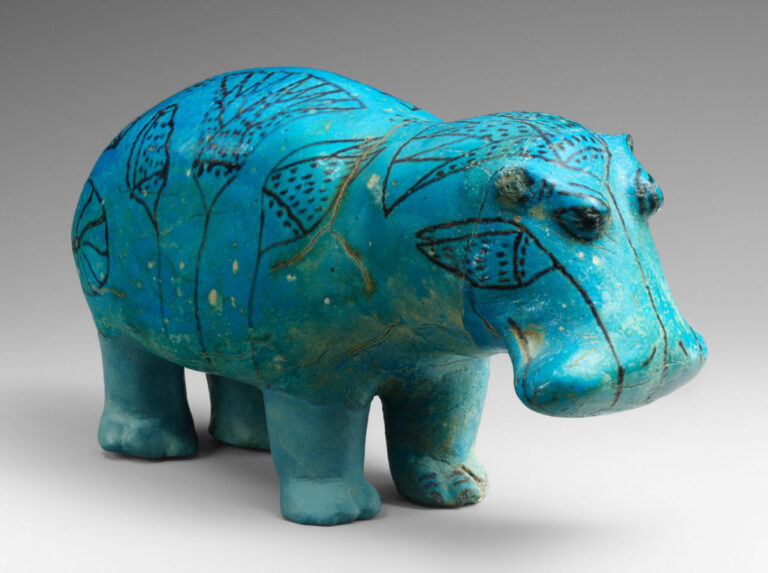 Blue faience hippopotamus was a popular statuette in ancient Egyptian art. They considered it to have positive traits associated with fertility and rebirth. Also, little hippopotamus statuettes were found among the objects buried in tombs. Varying in size from 9 to 23 cm in length, are now scattered around the world.

1. Hippopotamus from the Metropolitan Museum of Art

William is so popular among the visitors of The Met, where he has lived since 1917, that he’s even become the museum’s mascot. He was one of a pair found in a shaft associated with the tomb chapel of the steward Senbi II at Meir, an Upper Egyptian site. Three of his legs have been restored because they were purposely broken to prevent the creature from harming the deceased. We will talk about this superstition later.

2. Hippopotamus from the Kunsthistorisches Museum

Kunsthistorisches Hippo was recently restored – one of his legs has been removed and repaired. The lotus flowers and a flying duck on his back indicate the marshy habitat of the animal.

3. Hippopotamus from the Louvre

In the late 19th century the Egyptologists of the Cairo Museum wanted to display the duplicates of the finest works in their collection in France, so they sold the hippopotamus to the Louvre. This hippo has a unique feature: the four legs are connected by a strip of faience and rest on a plinth, making it the only one of its kind.

4. Hippopotamus from the Brooklyn Museum

The Hippo from the Brooklyn Museum doesn’t have legs, even fake ones. But there is a reason for that – the ancient Egyptians believed that hippos evoke chaotic forces because of the danger they pose to humans as wild animals in this world. For this reason, they often snapped off the legs of hippopotamus statuettes before placing them in tombs, so the hippos wouldn’t be able to eat the soul of the deceased.

5. Hippopotamus from the RISD Museum

The hippopotamus was also a power for good. Tawaret, a hippo goddess, protected women in pregnancy and childbirth. The fattier hippos symbolized fertility and rebirth. It has even been suggested that their color represented the primeval waters from which the world was created, and the lotus, which closes at night and opens in the morning, another symbol of rebirth.

6. Hippopotamus from the George Ortiz Collection

This hippo is unique. Out of the 50 to 60 surviving examples of faience hippopotami, there are only five represented with their head turned and this is the only one that figures a dragonfly.