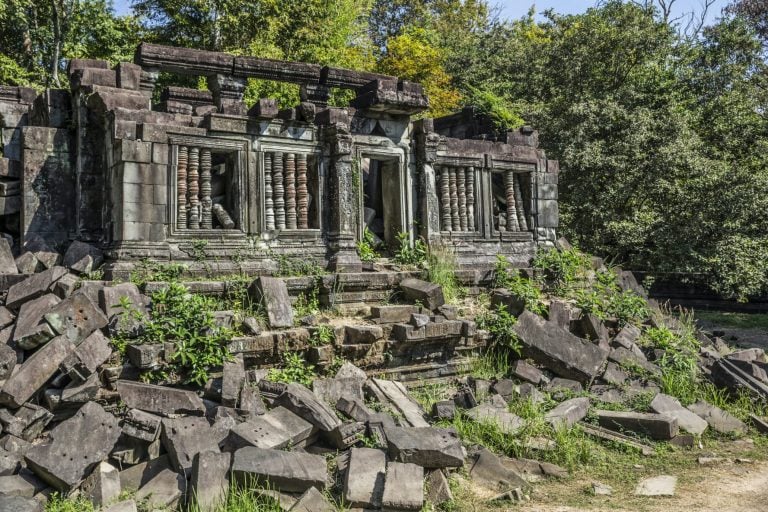 The Beng Mealea is a large and mysterious temple in the remote Cambodian countryside – about 25 miles from the main Angkor region near the stone quarries of the Kulen mountains. This temple was at the intersection of an ancient highway that connected Angkor, Koh Ker, Preah Vihear, and Vietnam. The temple and the surrounding city were quite prosperous in the 12th century.

History of the Temple

The origins and history of the Beng Mealea Temple remain shrouded in mystery as no inscriptions or legible steles crediting the builders have been recovered. The design and layout is identical to that of Angkor Wat. This suggests that it was built in the early 12th century – though it cannot be said with certainty whether it was built before or after Angkor Wat. It remains unknown as to which deity this temple was dedicated to.

The Similarity to Angkor Wat

There is speculation that Angkor Wat was inspired by Beng Mealea or that it was a tribute to Angkor Wat, but these questions remain unanswered.

Around 1500 feet east of the temple was a baray or artificial reservoir that supplied water to the moat surrounding the temple structure. This was a typical feature of ancient Khmer construction. There are causeways with long balustrades formed by bodies of the seven-headed Naga that lead up to the entrances of the temple complex. This baray and the moat are now completely dry.

The basic layout of the temple comprises three galleries enclosing a central sanctuary. Structures known as libraries lie to the right and the left of the avenue that leads in from the east entrance. All that is left now is a confusing but captivating pile of rubble, along with a labyrinth of tunnels and courtyards hidden away in the deep Cambodian jungle.

The Beng Mealea today is littered with ornate lintel and pediment carvings with Hindu iconography. Due to the lack of restoration efforts, there is no exhaustive documentation of all the carvings at this site. From what is accessible, various scenes from Hindu mythology, including the Churning of the Sea of Milk, Ramayana, and Vishnu being borne by Garuda are visible. There is a rare depiction of Yama, the God of death, on his rhinoceros. There is some speculation that when the temple was built, the walls may have been covered with frescoes, though none are visible after centuries under the forest cover.

Though the Beng Mealea was built as a Hindu temple, there are Buddhist motifs at the site that raise questions about the temple’s vintage. If they were part of the original temple, the temple was likely built after Angkor Wat. If so, the temple could have been commissioned by Dharanindravarman II, father of the legendary builder of the Angkor Thom and staunch Buddhist, Jayavarman VII. Though Dharanindravarman II was himself Buddhist, he made no attempts to change Angkorian religion or architecture like his son.

It is assumed that the temple was abandoned like the other Angkorian sites in the 16th century when the Khmer Kings moved their capital to Phnom Pehn. It was rediscovered in the late 19th century by French explorers.

Unfortunately, the area was a stronghold of the Khmer Rouge and was dangerous to visit for many years. Since 2003, the Cambodian Mine Action Centre (CMAC) and the Government of Germany have been engaged in efforts to remove landmines and other explosive remnants of war from the area in and around Beng Mealea.

The minefield clearing efforts are ongoing, and so far, 438 Anti-Personnel Mines and 809 UXO’s, including other unexploded bombs and ammunition, have been recovered. The road and the surrounding area are now safe for visitors.

Unfortunately, the temple’s isolated location in the jungle has left the site especially susceptible to looters. There was a large-scale plundering of the temple between 1980 and 1990 and also as recently as 2003. There have been more recent efforts to safeguard this incredible temple that has proved to be more successful.