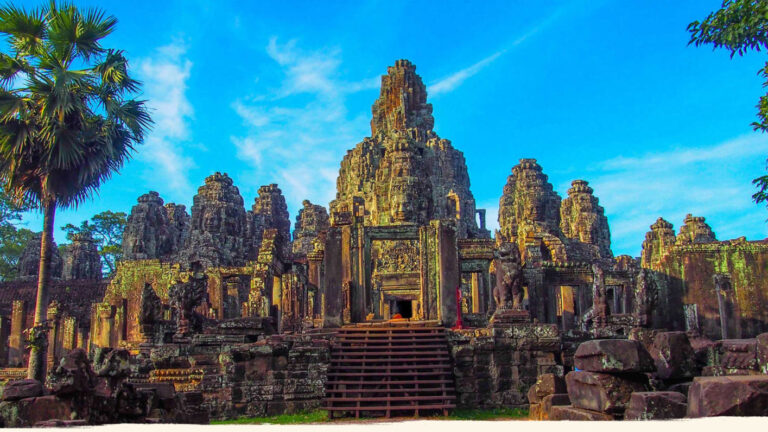 The Bayon at Angkor Thom. Cambodia Ministry of Tourism.

Colorful Temples in the World

The Bayon Temple is located at the heart of Angkor Thom and served as the state temple of the Emperor Jayavarman VII. It is a mountain temple built to represent Mount Meru – the center of the universe in both Hindu and Buddhist mythology. It is a popular stop at the Angkor Archeological Park and epitomizes the creative architectural genius of the Khmer period under the patronage of Cambodia’s most celebrated king.

Location of the Temple

The temple was constructed in the center of Angkor Thom, a large capital city of the Khmer empire under Jayavarman VII. Unlike other Khmer temples, the Bayon is not surrounded by a moat, though the moat surrounding Angkor Thom probably serves as the first line of defense for the Bayon. Four roads from the four entrance gopuras of Angkor Thom lead directly to the temple.

From afar, the Bayon looks like a glorified pile of rubble reaching for the skies. The tunnels, small yards, stairs, and blocked doorways spread across three levels and the labyrinth only becomes apparent upon entering the temple structure.

Much like the Angkor Wat, narrative bas reliefs adorn the gallery walls of the Bayon. The galleries on the first and second levels are squared and contain bas-reliefs with over 11,000 figures depicting the everyday life of the Khmer people in the 12th century as well as records of historical events, particularly describing various events from the battle with the Chams and their eventual vanquish. There are also carvings on the outer wall of the first level that depict vivid scenes of everyday life in 12th-century Cambodia.

The first two gallery levels lead up to a third circular level with a central tower – a unique occurrence in Khmer architecture. The temple comprises a total of 54 Gothic towers. It is theorized that each tower served as “eyes” to keep watch on each of the Khmer empire’s 54 provinces of the time.

The Bayon is also known as the temple of faces for the 216 serene faces sculpted on its towers. Initially, the faces were believed to represent the four-headed Brahma, the Hindu God of Creation. It was later established that the faces belong to Lokeshwara or Avalokiteshvara, the bodhisattva of compassion. There are a dozen or more faces visible from any vantage point at the temple. The face of Avalokiteshvara was modeled after Jayavarman VII himself.

Most Khmer kings were Hindus belonging to the Shaivite (worship of Shiva) tradition, though Vishnu was also revered by the Khmer people. Jayavarman VII’s adoption of Buddhism as his faith and the state religion resulted in a shift from Hindu iconography to Buddhist iconography in Angkorian construction.

The architecture of the Bayon was a definitive political statement about the widespread conversion of the Khmer people from Hinduism to Mahayana Buddhism. Although the Bayon was a Buddhist temple, other Gods were also worshipped. Separate shrines were dedicated to Vishnu and Shiva, while countless other deities were worshipped.

The Hindu restoration of the Khmer empire began around 1243 AD after the death of Jayavarman VII’s grandson, Jayavarman VIII. He was a devout Shaivite and was responsible for the large-scale destruction of Buddhist images and the re-establishment of Hindu icons that had been converted to Buddhism under his predecessor’s reign.

A 12-foot-tall statue of the Buddha at the Bayon was cast to the bottom of a nearby well under Jayavarman VII. A statue of the main idol, a seated Buddha sheltered under the hoods of the snake Mucalinda, was discovered in a pit under the main shrine during conservation efforts when the temple was rediscovered.

The Bayon was deserted around the 15 century when the Khmer kings moved to Phnom Pehn and the area became overgrown by thick jungle. The monument was first cleared in modern times around 1910 and the central sanctuary and the towers were restored around 1940 using the anastylosis method. The Bayon is currently maintained by the Japanese Government Team for Safeguarding Angkor (JSA).