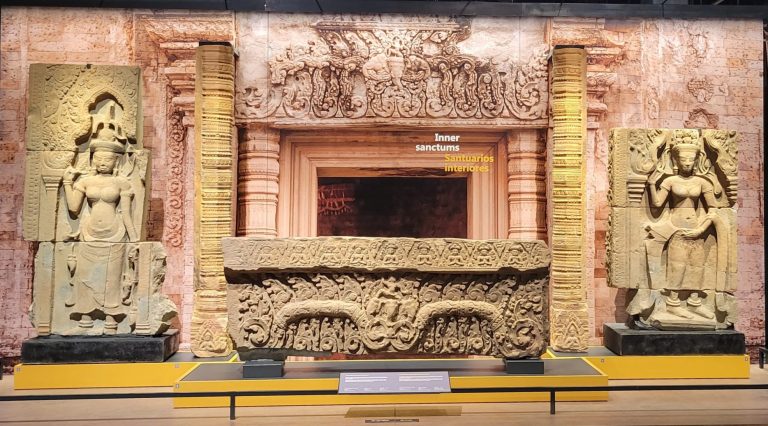 The California Science Center in Los Angeles, CA, is host to Angkor: The Lost Empire of Cambodia exhibition from 16 February 2022, through 5 September 2022. A stunning 3D IMAX movie employs scientific inquiry to explore the rise and fall of the Khmer empire, the extensive and elusive metropolis that for centuries was shrouded in mystery under the dense Cambodian forest. Attendees have the opportunity to explore over 100 Cambodian artifacts that are on international tour for the very first time.

The Khmer Empire thrived in present-day Cambodia from around 802 to 1431 BCE. This sprawling kingdom stretched through a significant portion of Indochina covering Cambodia, Thailand, Laos, and southern Vietnam. At its height in the 13th century, the population of Angkor was close to a million. The Angkor Wat (or city temple), built between 1113 and 1150 by Emperor Suryavarman II, is the most famous of all Khmer monuments and the very symbol of ancient Angkor.

The Disappearance of Angkor

Much of what is known about Angkor is derived from temple carvings and the writings of Zhou Daguan, the esteemed Chinese diplomat who lived in Angkor from August 1296 until July 1297. Angkor left behind an unparalleled architectural legacy that continues to attract tens of thousands of visitors each year. Every king expanded upon the achievements of the last until sometime in the 13th century when temple construction and historical records ceased. The population started to dwindle and Angkor was eventually swallowed up by the lush jungle. It was then rediscovered by French anthropologists in the 19th century. Historians have often been perplexed at how this expansive empire disappeared without explanation.

For millennia, Cambodia’s expansive agricultural system was supported by the annual Asian monsoon season that caused flooding of the lowlands. The Khmer Empire’s principal cities were designed to take advantage of the rains through a complex system of urban planning to collect and store water during the monsoon when the water table is right at the ground surface and between 45 to 75 inches of rain falls each year. In contrast, the water table drops up to 16 feet below the ground surface during the dry season. Miles of canals, irrigation channels, and reservoirs enabled the adequate distribution of water throughout the year. The system not only allowed a sprawling metropolis to thrive in the middle of the dense Indochine rainforest but also generated significant wealth and as a result, influence in the region.

Archaeologists and paleo-environmentalists have documented two severe droughts, from around 1345 to 1374, and then from around 1401 to 1425. Each drought was abruptly reversed by unusually strong monsoons that irreparably damaged Angkor’s infrastructure, thereby further crippling agricultural productivity that was severely impacted by the effects of the droughts. There is even evidence of modifications and fortifications made in attempt to withstand the heavy rains. However, the flooding decimated the reservoirs by carrying sand and sediment due to erosion, leading to cascading consequences for dependent parts of the vast network. Soil studies indicate that the effects were sudden and devastating. It is likely that entire sources of water were rapidly lost.

Around 2010, Dr. Brendan M. Buckley and his team from Columbia University’s Lamont-Doherty Earth Observatory published a study involving cylindrical core samples extracted from tree rings. They substantiate the theory of alternating drought and deluge, highlighting the role of climate in the fall of Angkor. Tree ring studies are a highly accurate way to trace climate over hundreds of years. Trees produce a new growth ring under their bark every year. Buckley’s team obtained core samples from ancient Fujian cypress trees (Fokienia hodginsii) from the Bidoup Nui Ba National Park in the neighboring county of Vietnam.

Although a bit removed from the ancient metropolis, these trees had been growing for a thousand years and were living when Angkor was in its prime. The tree rings reveal that they grew and expanded in the years of abundance and were stagnated during timed of drought. Thus Buckley and his team were able to accurately identify and reconstruct the Angkorian climate in the final centuries of the Khmer empire.

The Fall of Angkor

The lack of historical texts after the 13th century has significantly hindered determining the precise circumstances surrounding the demise of Angkor. In addition to the climate, geopolitical and religious factors were weakening the fabric of Khmer society. These include an ongoing war with the neighboring Thai Kingdom of Ayutthaya and civil disharmony from the conversion of the society from Hinduism to Theravada Buddhism. It is now believed that the turbulent climatic conditions may have been the final nail in the coffin for Angkor. Most historians date the fall of Angkor to 1431, in the years just after the second drought when the Siamese army besieged and sacked the capital city.

The Role of LIDAR

Decades have passed since the first French anthropologists and archeologists wandered through the thick Cambodian jungle searching for remnants of this elusive metropolis. However, the introduction of LIDAR (Light Detection and Ranging) and aerial surveys have revolutionized the archeological process. LIDAR involves directing pulses of light at the ground from lasers that are mounted on helicopters. The light that bounces back to the equipment creates patterns that reveal of places of interest for excavations, including those hidden beneath obstructions. LIDAR has helped locate structures, identify quarries from which sandstone was extracted, and exposed vast networks of ancient highways. LIDAR has also revealed information about the ordinary people of Angkor including food habits and cooking methods, helping to paint a more accurate picture of ancient Angkor.

The Role of Landmine Detection

Landmines have contaminated the soil of Cambodia since the devastating Khmer Rouge. These hidden explosives continue to claim Cambodian lives decades later. Since 1979, over 19,000 people in Cambodia have been killed by landmines and explosive remnants and several more injured. The explosive munitions also hamper and endanger archeological efforts. In recent years, an ingenious solution in form of “sniffer rats” has revolutionized landmine removal efforts. African pouched rats have been successfully trained to identify explosives to their handlers, allowing for safe landmine removal. The rats are very lightweight and do not set off landmines. They can also cover large and sprawling areas of land with impeccable accuracy and great speed.

Visit the California Science Center, located in Exposition Park in the heart of downtown Los Angeles to explore Angkor: The Lost Empire of Cambodia and the 3D IMAX film until 5 September 2022. The California Science Center is also host to other awe-inspiring temporary and permanent collections including the Space Shuttle Endeavor, the beautiful Kelp Forest, and many more! Check for hours, showtimes, and directions here.