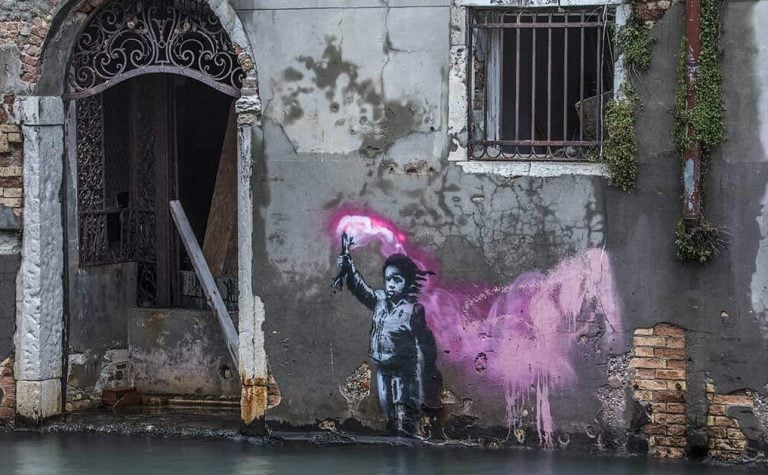 Banksy is an artist who became famous all over the world for his clever political and social graffiti. He always denounces injustice, inequality, and contradictions in contemporary society, from excessive consumerism to climate change and the horrors of war in every form. For this reason, he never forgets to underline and show the world the condition of migrants, their stories, and their value. Banksy even concretely helped them. Come with us in this revealing journey.

In 2015, for 36 days, Banksy created a temporary exhibition called Dismaland, in Weston-super-Mare, Somerset, UK. The name recalls both the word “dismal” and Disneyland. It was supposed to be an unconventional amusement park full of criticism and disturbing works of art. A list of 57 artists collaborated with Banksy to the definitive installation.

Among the most famous masterpieces of Dismaland was the Refugee Pond. In an artificial pond, people could play with four remote-control boats, like in many city fairs. But there, they were three ships full of migrants and a police motorboat.

This piece was created to underline again especially the condition of Syrian refugees. That’s why, at the closing of the exhibition, Banksy sold the boats to donate the proceeds to help the refugee camp in Calais, France, where lots of Syrian people were staying. 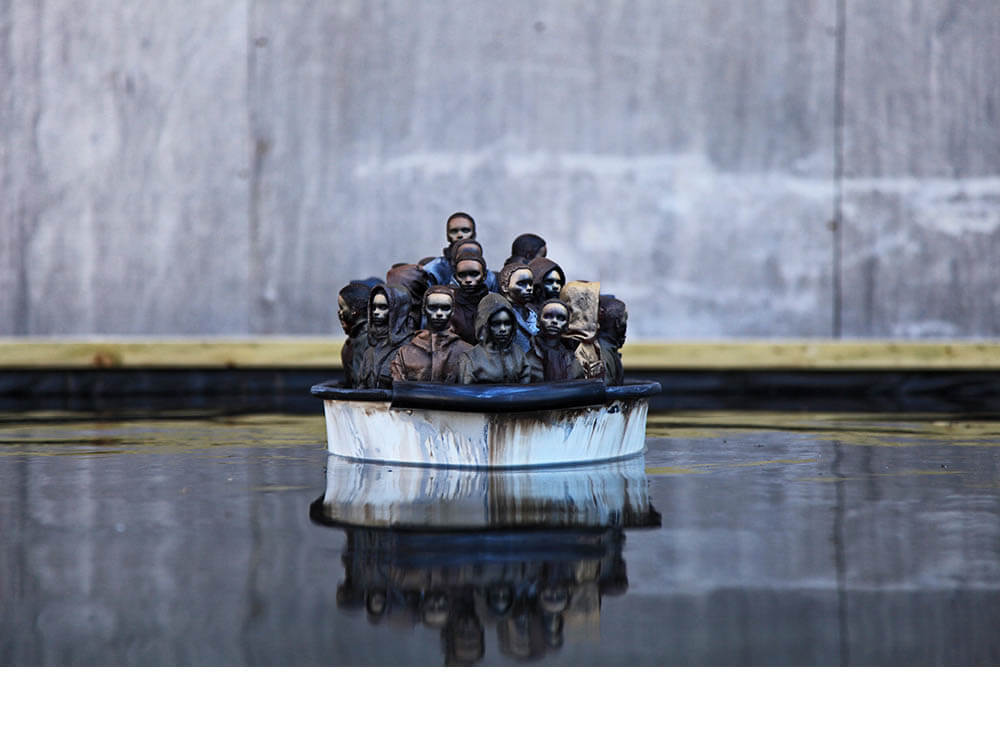 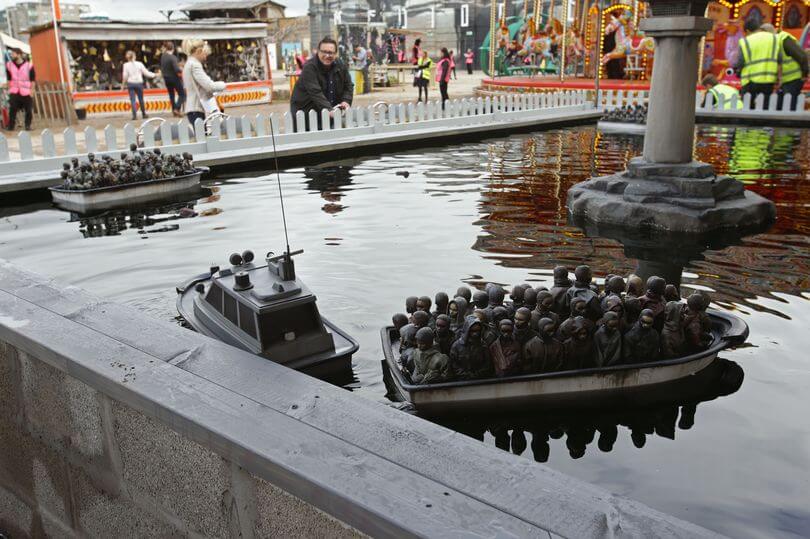 The Refugee Boat is going around in the Pond of Dismaland, escaping the police vessel.

The installation of the Pond in Dismaland recreated the distressing sailing of migrants looking for a new life. Here, we see the Refugee Boats and police vessels.

This work was completed exactly in the refugee camp of Calais, also known as “The Jungle”, in 2015. It represents Steve Jobs, the founder of Apple, with his typical black sweater, a pair of jeans and a pair of sneakers. But he also carries a backpack and an old Apple computer. In fact, Steve Jobs was actually the biological son of a man who emigrated from Syria to the United States but was later adopted by an American couple. He really was the son of a migrant, and was able to realize an incredible thing such as a worldwide known company.

The graffiti underlines, on the one hand, the fact that many famous people were once migrants. They have a value, they can integrate, they can be exceptional. On the other hand, the works denounces the terrible treatments of migrants in refugee camps. By completing this mural, Banksy allowed people, through photos, videos, and visits, to discover the world of the camp of Calais. Vandals then destroyed The Son of a Migrant from Syria and nowadays it is not visible anymore. 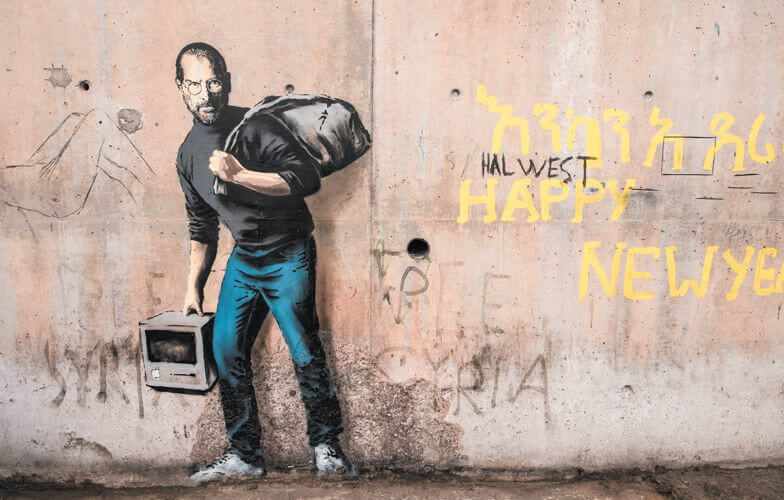 Banksy, The Son of a Migrant from Syria, 2015, Calais, France. Analisi dell’Opera. 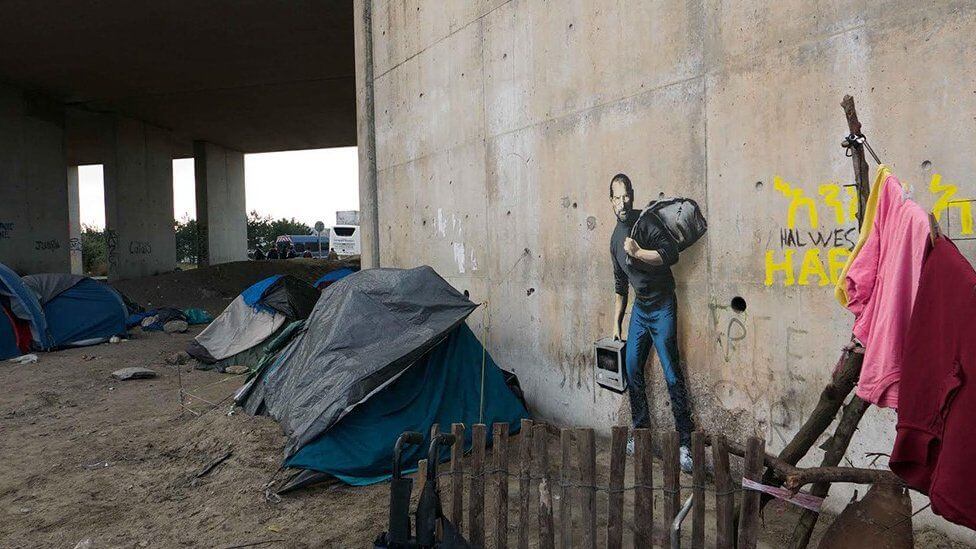 Banksy, The Son of a Migrant from Syria, 2015, Calais, France. Analisi dell’Opera.

Even Steve Jobs was son of a migrant, and he was able to perfectly integrate in the USA and bring richness to the nation.

The artwork was well-visible on a wall of the refugee camp in Calais, among camping tents and makeshift homes.

The theme of migrants hit Italy very toughly in the 2010s. During the Venice Biennale in 2019, Banksy realized the famous Migrant Child on the island of Dorsoduro. In this work, we see a child wearing a lifejacket and holding a pink flare. When there’s high tide, the child seems about to drown.

This graffiti especially recalls that among refugees there are lots of children. They are all escaping from wars and impossible life conditions. You just cannot look at them drowning next to you! The work is still well visible in Venice.

Anti-immigration birds gave us a simple though effective message. This piece appeared in Clacton-on-Sea, Essex, UK, in 2014. It showed four gray pigeons holding signs reading “Migrants not welcome,” “Go back to Africa” and “Keep off our worms,” while a more exotic-looking, green bird looked on and kept itself at distance on the same wire.

The witty graffiti makes us think about nature and human beings. No bird, in reality, would ever exclude another because of migration. This is part of their lives, part of being birds on this planet. Banksy would probably suggest that the situation should be exactly the same for people, i.e., migration and immigration have always been everyday life; lots of people are always moving to other places. Instead, people often refuse to welcome new arrivals and even accuse them, like these humanized birds.

The local council removed the mural a few hours after appearance, even before Banksy could announce it on his website. Destruction took place because of a complaint the work was racist. And it effectively was, but with the purpose of being satirical and disturbing.

Banksy made the most significative act in favor of migrants in 2020. He acquired a former French Navy vessel, named Louise Michel after a French feminist anarchist. Then, he wrote to Pia Klemp, a Sea Watch captain whose ship had been impounded by Italian authorities, and offered her this new rescue boat. She accepted and assembled a team of ten activists. Sailing on the Louise Michel, they rescued 89 migrants stranded in the Mediterranean Sea. Then, they encountered another ship with 130 migrants, who joined the group. With more passengers than it could handle, the boat issued a distress call and ultimately all escapees landed in Italy.

The Louise Michel is like no other boat. Firstly, Banksy painted it before donating it. The vessel has wide pink areas and a large “RESCUE” logo. Moreover, the artist also stenciled one of his graffiti designs on the exterior. It represents a black-and-white girl in a life vest, reaching for a pink heart-shaped safety buoy. Secondly, the ship reaches a top speed of 27 knots, high enough to outrun the majority of the authorities’ boats.

After the mission, Banksy posted a video to Instagram in which he signaled that often “EU authorities deliberately ignore distress calls from ‘non-Europeans.’” With this action, he probably wanted to use his fame to shed light on one of the greatest humanitarian issues of the 21st century. 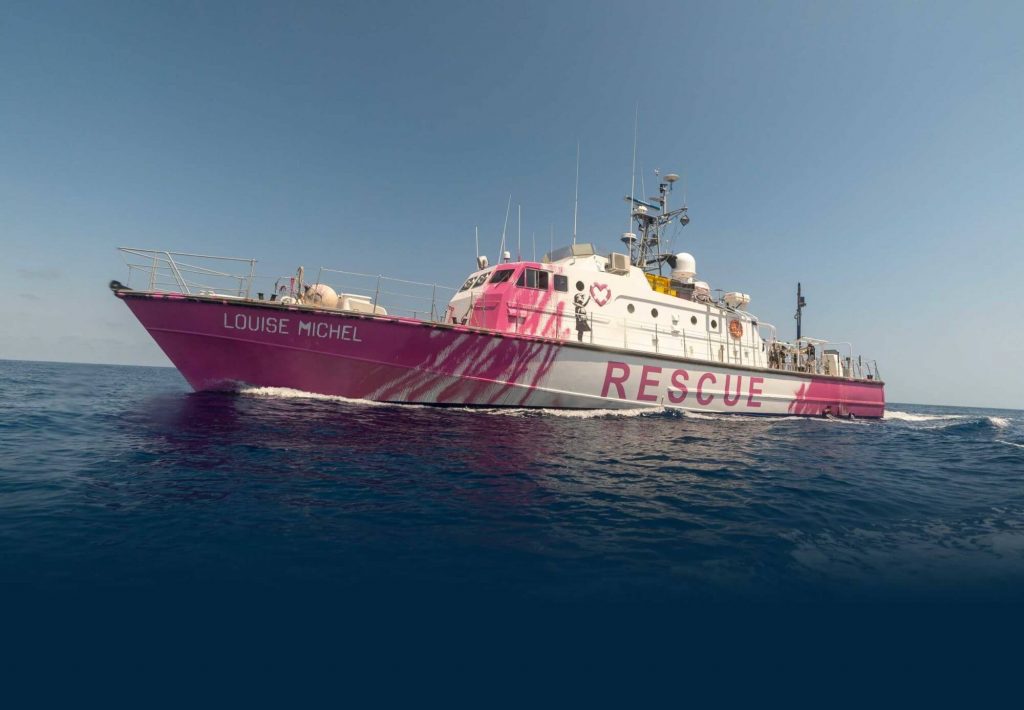 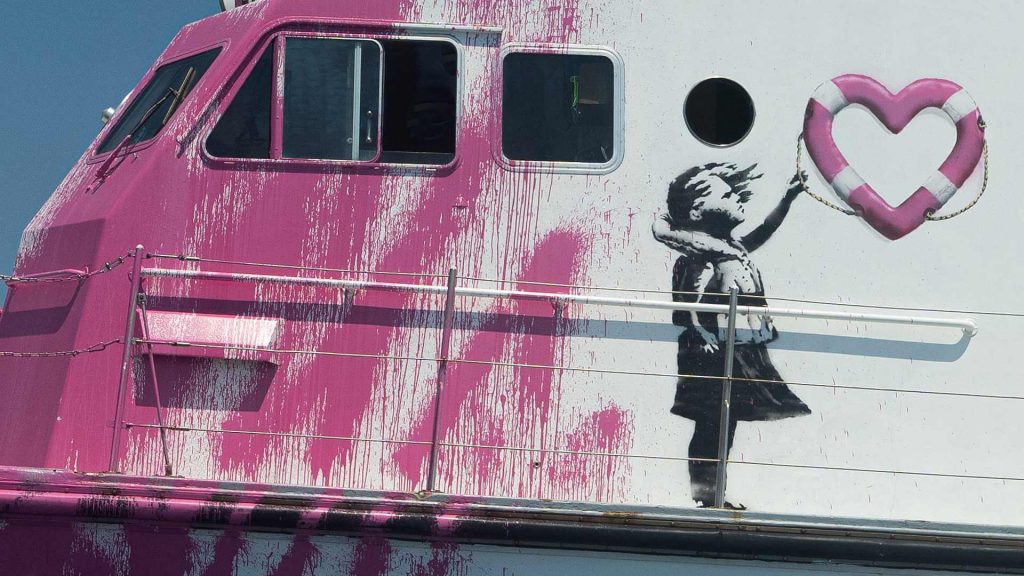 Banksy wanted to physically help migrants, so he funded a white-and-pink boat and donated it to Sea Watch, an ONG operating in the Mediterranean Sea.

The artist personalized the boat, stenciling a girl in a life vest reaching for a pink heart-shaped safety buoy. A typical Banksy’s artwork, recalling the extremely known Girl with Balloon.

Other Initiatives and… What’s Next?

Banksy had already spoken about war and refugees in 2003, when he had painted artworks on the West Bank barrier in Bethlehem. In 2019, he opened a pop-up shop in London, selling “unpractical and offensive” products. Among these, we could find mats with the word “Welcome” which were hand-stitched using the fabric from life vests abandoned on the Mediterranean beaches and fabricated in Greek refugee camps. In the shop, they were shown next to orange life vests.

What will Banksy do again in the future for the poor and the forgotten?

Sonya Sklaroff is a contemporary American painter and artist best known for her cityscapes of New York City. A professor at Parsons School of Design...