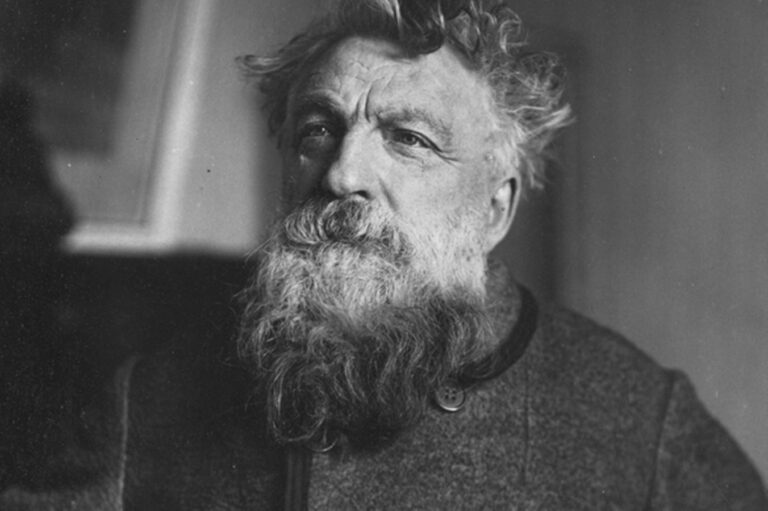 Auguste Rodin was a master of modern sculpture. Instead of copying traditional academic postures, he preferred his models to move naturally around his studio.

The writer George Bernard Shaw sat for a portrait and gave an idea of Rodin’s technique:

While he worked, he achieved a number of miracles. At the end of the first 15 minutes, after having given a simple idea of the human form to the block of clay, he produced by the action of his thumb a bust so living that I would have taken it away with me to relieve the sculptor of any further work.

You can see how Rodin worked with marble in his studio in Paris in 1915 in this rare footage.

Auguste Rodin is known for developing a new approach to sculpture as a whole; he made naturalistic, textured forms that differed greatly from the smooth sculptures favored at that time by the Academy. He worked with various mediums: plaster, clay, bronze, terracotta, and marble. Also he depicted both lone figures and group compositions. Furthermore, his artistic practice allowed him to convey a range of emotions.

Rodin’s most well-known work is probably The Thinker (Le Penseur), a bronze sculpture cast in 1904. It depicts a heroic, nude male sitting on a rock in deep contemplation, usually displayed on a pedestal. The figure leans forward, resting his chin on his right hand, deep in thought.

Originally made to sit over Rodin’s monumental The Gates of Hell, this sculpture encompasses the qualities of Rodin’s sculpting; he is brutishly muscled and completely engrossed in thought, both tense and relaxed, embodying both “the dream and action”. There are about 28 bronze casts of it in public spaces and museums around the world.

The first full-scale cast was made in 1904 and presented at the Paris Salon. The City of Paris commissioned a bronze casting, which was put in front of the Panthéon, and in 1922, the original bronze cast was moved to the Rodin Museum, in Paris, France.

Undergraduate History of Art student and aspiring writer interested in exhibition-making, design and contemporary art from Eastern Europe and East Asia. They are living and working between Poland and the UK.