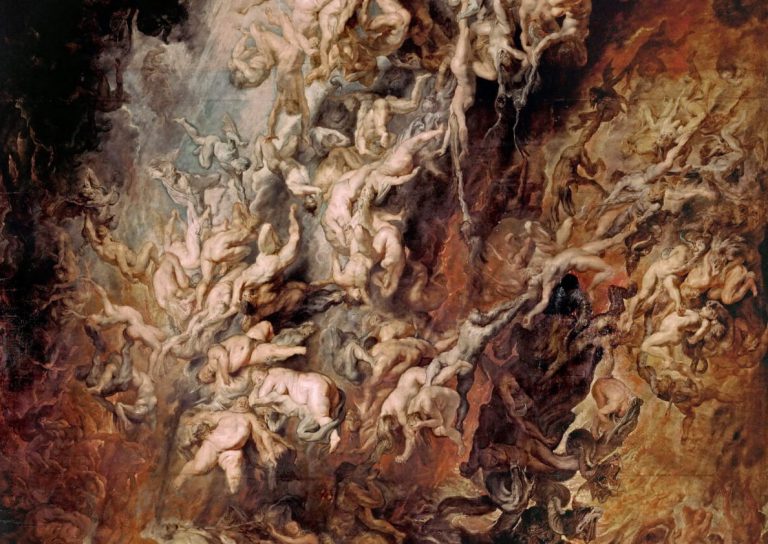 In June 2020 Netflix released the long-awaited third and final season of Dark. The German series, co-created by Baran bo Odar and Jantje Friese, has been a great success, but SPOILER ALERT: if you haven’t already watched it, do so before reading about art in Dark!

Dark is about mystery, time travel, and parallel dimensions, but above all, human nature; it’s about finding out what the impetus of human action is.

When you were watching the series, you may have been very busy trying to understand why there are four new Jonases and Marthas in every episode and who is who. But every art lover who watched the series carefully probably noticed some artworks which often appear and which have a specific meaning.

If you struggled to remember the name of a painting too, let me show you what art you can find in Dark.

The Fall of the Damned by Rubens

In the first episode of the second season, we meet Adam, a disturbing and scar-faced man who says really confusing things about determinism, future, and fate.

Adam is the founder of Sic Mundus, the group of time travelers that believes that everything must happen as it has already happened, the apocalypse included, so that the same cycle of events can keep going on.

Later, we find out that Adam is the older Jonas, and we can’t help wondering how that hopeful boy has become a cynical and evil old man who keeps lying to his younger self.

There are many theories about Adam being another character, like Mikkel or Bartosz. If you want to know more about it click here.

In the second season, when we see Sic Mundus’ headquarters and Adam’s office, there is a painting that is often filmed: it’s The Fall of the Damned, also known as The Fall of the Rebel Angels, by Peter Paul Rubens.

The story of The Fall of the Damned

The painting depicts the moment when Archangel Michael casts out the rebel angels during God’s final judgment, which St. John describes in the Biblical Book of the Apocalypse.

The good, represented by Archangel Michael and the angels from Heaven, defeats the evil; the mass of bodies flows inordinately into Hell, where monsters and demons torture the damned angels and people.

David Freedberg, an art history professor at Columbia University, said that this painting is “the most brilliant assemblages of lusciously naked flesh in Western art”. As a matter of fact, Rubens loved painting human bodies in the most suggestive and shocking way.

Looking at this painting is like opening your eyes after a strong beam of light hits your sight. Here the bright light that hits the damned seems to underline their mortality and sins. This artwork has had such great impact that in 1959 Walter Menzl, a philosopher who wanted to promote his ideas about universal peace, threw acid on it. He said that the acid “relieves one from the work of destruction”.

The Fall of the Damned is disturbing and attractive at the same time: you just can’t stop admiring it. This happens in Dark, too: when Adam talks, he and his interlocutor stare at the painting all the time. But what is its meaning in the series?

The Meaning of Sic Mundus

Good and evil are a question of perspective.

In Dark, there are no precise borders between good and evil. In the beginning, we think that Noah is the villain of the story, then we find out that he is just a pawn in Adam’s plan. On the other side there is Claudia, “the white devil”, and then an older Martha shows up from a parallel world in the last season.

Everyone fights their own battle, for their reasons, but they all have the same aim: to save their loved ones from the apocalypse. So, in the end, is there a real villain?

For Adam, God represents evil: it’s not the Christian God or any other religion’s god. In his vision of the world, God is time; that’s the entity he is fighting against. Adam wants Jonas to perpetuate the cycle so that he can become that version of himself. But what he really wants is to break the cycle once and for all, and to do that he has to stop the origin: the baby that will be born from Jonas and alternate Martha.

So, the Fall of the Damned may represent his own battle against time: if he does not succeed, he and his loved ones will be doomed to repeat the same cycle of life, and the same pain, forever.

Adam and Eve by Lucas Cranach the Elder

As the episodes go on, Martha and Jonas’s relationship becomes more and more impossible. First Jonas finds out that Martha is his aunt, and when they finally meet again and decide that it doesn’t matter, Adam kills Martha. Then the alternate Martha falls in love with Jonas, who is later killed in the alternate world by a slightly older version of alternate Martha.

Meanwhile, Adam and Eve (the older version of alternate Martha) fight against each other; he wants to kill the origin, while she wants to save their son. Long story short: it’s impossible for them to be together, in any world.

You may have noticed in the third season that in the parallel world, Eve is in the headquarters of her cult, Erit Lux, like Adam, but she is looking at a different painting; it’s Adam and Eve, by Lucas Cranach the Elder.

The Story of Adam and Eve

Cranach painted many versions of the two biblical ancestors, continuing Dürer’s anatomy studies; in fact, during his stay in Vienna, the artist had met many humanists who were close to Dürer.

Adam and Eve are portrayed in two separate panels, on a dark background, unified by the tree of the knowledge, of good and evil. However, this version is not the best-known one. Cranach painted his most famous Adam and Eve in 1528, and it is located at the Uffizi Gallery, in Florence.

Why did the creators of the series choose the lesser-known version of the painting? The answer may be in the apple, the fruit of knowledge. The only difference between the two paintings is that in the older version both Adam and Eve are holding the apple, while in the 1528 one only Eve has it in her hand.

In Dark, both Adam and Eve commit terrible acts in order to get what they want, but they also sacrifice themselves so that the good can finally win. The fact that in the painting they both hold the apple could symbolize the dualism of their fault, of their battle, and of their final sacrifice.

Adam and Eve: Love and Paradise in Dark

The story of the biblical characters and of Dark’s main characters is quite different. There are some similarities, though. In both stories, they are the progenitors of their worlds, and they sacrifice themselves and their happiness in the name of knowledge.

Biblical Adam and Eve eat the apple; Dark’s Adam and Eve find out that there is a third, right world, and that they are just a mistake. When they get that knowledge, they finally obtain free will: they are no longer pawns in God’s (or time’s) plan.

The difference is at the end of their story: biblical Adam and Eve are cast out from the Garden of Eden, and they will start the human species, while Dark’s Adam and Eve let the Paradise (the third world) exist by canceling their existence.

In the end, Dark is about love: this is what drives every human action. But Adam and Eve’s love is damned from the very beginning; if their love exists, there is no paradise, if paradise exists, their love does not.

And yet they still believe in their story. They don’t think it was a mistake, until the very end when they disappear so that the third world, the “Paradise”, can be the only one.