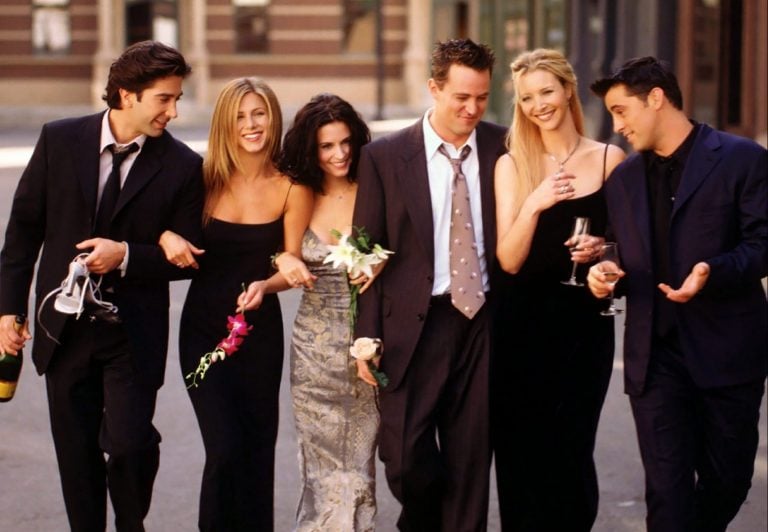 Who doesn’t love Friends? Without a doubt, it is one of the most watched and most loved TV series in history. We all know about this group of best buds and their hangout spot, Central Perk. Huge coffee mugs, a variety of sweets, a decoration that reminds us of granny’s house. It has something intimate and cozy, right? But, have you ever noticed the gallery wall behind the famous orange couch that keeps changing throughout the seasons? Let’s see the art in Friends.

If you observe the background of Central Perk, you will see that besides the artworks and their constant change each season (sometimes twice during each season), there is also a pattern. They are all Pop; some of them look like they are Andy Warhol’s or Roy Lichtenstein’s creations, some seem like replicas or recreations of other famous paintings. Besides, the 1990s, when the TV series aired and met its success, was the decade of Pop Art, at least in the USA.

Burton Morris is the artist whose works appear the most throughout the 10 seasons. The first contact between the artist and the producers happened when David Schwimmer (aka Ross) wore a t-shirt with one of Morris’ designs on the setting.

The producers contacted Morris and so began their creative collaboration. Depictions of a steaming coffee cup, the Statue of Liberty and other images that refer to American culture exist on the gallery wall of Central Perk throughout the course of the show.

Burton Morris was born in 1964 in Pittsburgh, Pennsylvania, USA. He holds a degree in fine arts from Carnegie Mellon University. He has created the artworks for the United States Olympic Team, the 38th Montreaux Jass Festival, the 2010 FIFA World Cup etc. Also, he has done commissions for Chanel, Perrier, Absolute Vodka, Rolex, Kellogg’s, Ford, Coca-Cola, and other big enterprises.

For the 25th anniversary of the show, Burton Morris, in collaboration with Warner Bros Inc. held an exhibition with all of his famous pieces that appeared on the show and several new ones, inspired by the occasion. The exhibition took place from September 19 to October 16, 2019 in New York.

Of course Burton Morris wasn’t the only artist to decorate the Central Perk wall. There are other pieces too but it is difficult to find the original artist. It could be a commission or a simple decorative accessory for the background. In any case, here are some of those.

*Certainly, there are more pieces but it is difficult to find clear photos, as they were background details.