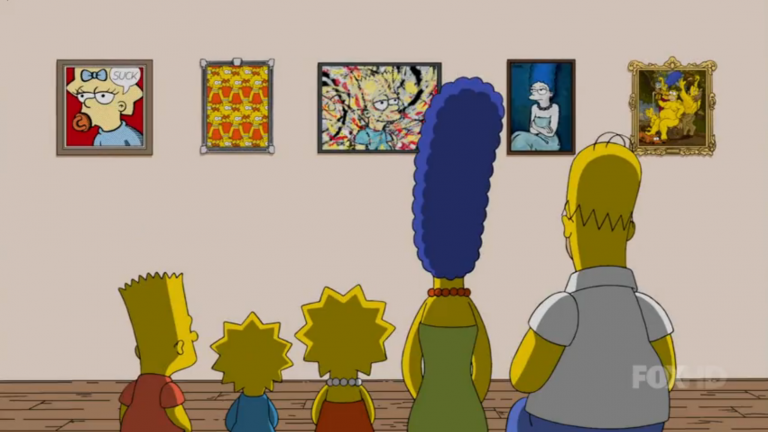 Back in the mid-1990s, a friend of mine showed me a book titled Bart Simpson’s Guide to Life. It was just what the title described, America’s most mischievous boy giving advice on how to better live your life. In it, one of the chapters was about art, and the advice was about how to act in a museum. After reading the quote you can enjoy some art references that we found in The Simpsons!

Museums are our hallowed halls of culture, but don’t hold that against ’em. They demand respect, man. So the next time you get dragged into one of these dusty old dumps, remember to behave.

The book was published in 1993 when The Simpsons was only in its fifth season, but even back then the show had had enough to let their love for art be known, something it still does to this day.

Maybe one of the first episodes to come to mind when thinking about art is and The Simpsons is Mom and Pop Art (S10E19), when, while trying to put together a store-bought barbecue pit, Homer, in a fit of rage, ends up creating a mesh that is perceived as a piece of modern art. Homer ends up becoming a celebrated artist, but quickly realizes that making art is much more difficult than accidentally letting his rage get the better of him, which prompts him to visit the Springfield Museum to look at famous art pieces for inspiration.

But Season 10 was hardly the first time The Simpsons showed off their love for the fine arts. Back in S1E11 (The Crepes of Wrath) saw Bart sent off to the French countryside as an exchange student (although he was actually exploited as a winemaker). While on a quick motorcycle ride across France, Bart passes through a couple of landscapes which the eager viewer might recognize as familiar paintings.

When interviewed about this subject on the ArtMatters Podcast, pop culture critic Emily VanDerWerff said about this episode:

Another noteworthy observation by VanDerWerff suggests that The Simpsons use art as part of their distillation of culture, specifically 20th-century American culture, which can be seen in the many instances art of that time period and origin is strewn across the show. This, she adds, gives new baggage to art; a phenomenon she believes happens every time a piece is appropriated by pop culture.

There is, however, an instance unlike any other, in which a piece of art serves as the driving force behind an episode. Homer is where the art isn’t (S29E12) tells the story of how Homer becomes obsessed with the 1940s painting, The Poetess, by Joan Miró. An uncharacteristically focused Homer strives the whole episode to contemplate and appreciate the beauty of the painting, which makes him the prime suspect of its theft when it goes missing. An otherwise regular episode becomes very much relatable as the sight of Homer taking in the fullness of The Poetess is one many of us may experience when visiting a museum or gallery, reminding us that art can truly be for anyone.

While these are some examples, The Simpsons, currently past their 33rd season, have shown –or hidden– many more art references than we could ever list here, which is just another fun excuse to pay more attention next time we visit our favorite Springfield family.