The Countryside in Art: from Idyllic Scenes to Social Issues 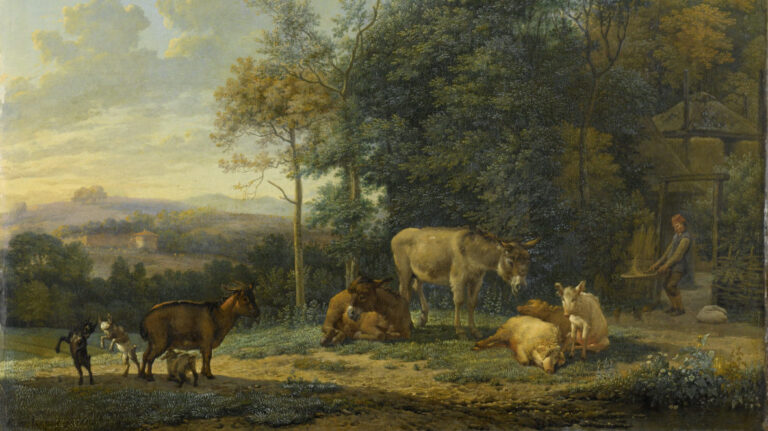 Pure life in harmony with nature or hardship and poverty? Let’s take a look at various representations of the countryside in art.

Karel Dujardin was a Dutch Golden Age painter specialized in landscape scenes with animals and peasants. In this painting, a farmer separates the wheat from the chaff, while chickens eagerly pick at the fallen grains. The raking light of the low-hanging sun evokes an early evening atmosphere. The architectural style of the cylindrical building in the distance suggests that the scene is set in Italy.

While Dujardin specialized in pastoral landscapes, his contemporary Adriaen van Ostade created a lot of artworks depicting scenes of villagers and peasants. In this painting, three men and a woman discuss daily matters, and a child eats soup or porridge while a dog looks on. Peasant life does not seem at all bad. This type of paintings was popular among ‘respectable citizens’ who found the representation of country folk entertaining.

A sense of harmony and an emphasis on the dignity and well-being of the peasants are important aspects of this painting by Alexander Lauréus. This romantically idealized image of the peasant’s life as being natural, pure and joyful stems partly from the ideals of Enlightenment philosopher Jean-Jacques Rousseau, with which Lauréus is known to have been acquainted.

The Strawberry Girl and The Goose Girl – Two Different Worlds

A poor peasant girl is returning from a walk in the forest with a basket of freshly picked, sweet berries for her mother? One might think so. Actually, the model for The Strawberry Girl was an aristocrat maiden called Ulrika Charlotta Armfelt. It was a popular pastime of 18th century nobility to dress up in peasant costumes, as is the case with the girl in the painting. They idealized a simple, earthy life. The girl’s costume shows, however, the striped design which was the fashion of King Gustav III’s times.

Contrary to The Strawberry Girl, The Goose Girl presents a more realistic take on the peasants’ life. Although coming from a privileged background herself, Edith Somerville had an interest in and sympathy for the lives of the villagers and country people of West Cork. The child, with her dark eyes and hair and her ragged barefoot attire, resembles the Italian models favoured by French artists in this period. In fact, it is a local girl called Mary Ann, who poses for the artist. Edith acquired the white goose held by the girl for three shillings. With its superb still-life detail, gleaming copper vessels, cabbage and string of onions, The Goose Girl is one of Edith Somerville’s finest early paintings.

At the end of the nineteenth century The Funen painter H.A. Brendekilde created several acerbic social-realist works. At other times he depicted the everyday life of poor people without critical undertones. Brendekilde grew up in the countryside and had felt social inequality close to home. His masterpiece Worn Out is just the thing for a tragic cover story. A day-labourer has collapsed in his field. Next to him a woman is screaming of helplessness. The picture was exhibited at the Exposition Universelle of 1889 and also at The World’s Columbian Exposition in Chicago in 1893. The bourgeois press, on the other hand, considered it melodramatic and overly political.

Another socially engaged painting representing the countryside by Antanas Gudaitis considered the ‘father’ of the Expressionist painting in Lithuania. He painted The New Settlers on his return from a period of study in Paris. The characters and mood of the painting recall Parisian depictions of musicians and circus artists. In order to make an interesting color combination the artist boldly painted goat in tones of blue and cow in tones of red. Although, rather than reflecting the joy of life, he portrayed the anxiety and problems of a young peasant couple. In the eyes of contemporaries, the title of the painting turned this artwork into a reference toward a pressing problem in society, reflected both in art and literature of the period.

From the Countryside to the City

This picture is emblematic of the 19th century as a revolutionary era on the threshold between the old and the new. The train rushes through the peaceful countryside. Karl Nordström was one of the Swedish painters who traveled by train to the artist colony in Grez-sur-Loing. The railroad connected town and country, opening up new perspectives and opportunities. Urban tourists visited the countryside in search of the fresh air and the provincial atmosphere.