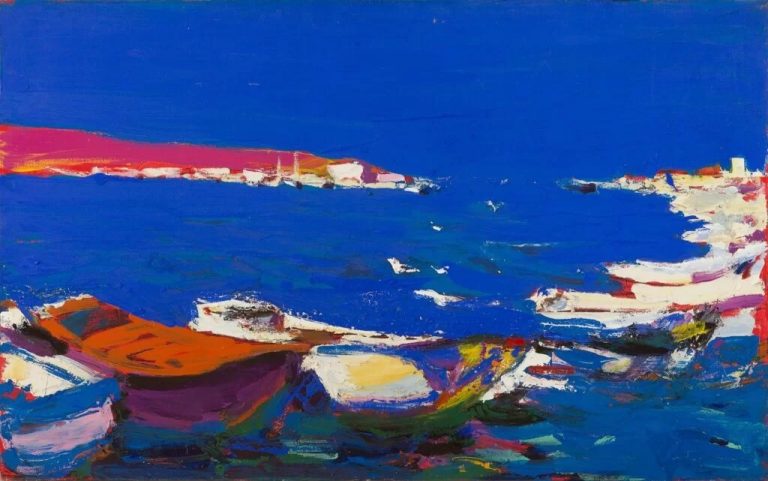 Anatoliy Kryvolap is a contemporary Ukrainian artist whose paintings are sold at the world’s most prestigious auctions for thousands of dollars. He works on the verge of figurative painting and abstraction. That is to say, the artist’s calling card is the use of bright, expressive colors in radical combinations.

Kryvolap’s creative wanderings began in 1976 – the year when he graduated from the Kyiv Art Institute – and lasted for many years. The early realistic period in Kryvolap’s artworks ended quickly. However, for example, the portraits he created did not get much attention. Painting landscapes and still lifes in the Impressionist style was also not what he had his heart set on. However, the landscapes made it possible for the artist to find his relationship with color. He later noted that it was a rather complex and lingering process.

Then, everything has changed radically after Kryvolap let the Fauvists into his creative life in the mid-1980s. He was attracted by bright colors and the manner of depicting objects in a bird’s-eye view. He was also obsessed with canvases that pulsed with expression. One by one, more temperamental paintings appeared from under his brush.

But that was just the beginning. The artist felt something was still wrong; something was not quite in its place. Kryvolap was worried about the details. That is to say, it seemed to him that they distracted him from the pure magic of color. Gradually, abstraction came into the artist’s life. Thus, Kryvolap’s 10-year relationship with non-figurative painting began.

I studied color all my life. Studied a lot, and wrote many sketches. I studied the gray day and its nuances, the sun with its transitions – from yellow to red and almost crimson. I’ve been experimenting with color for 20 years. The purpose of the experiments is the full power of color, its sound fully. Than the color is more open, the stronger emotion is. Here you are sitting in a gray room – it’s a feeling, and imagine that the room is bright blue or bright red. This has a tremendous effect on emotional state, on perception. I create paintings in the formats that are most effective in terms of color and its emotional impact. I create such a spot of color that it tightens, has the maximum effect on the viewer. A small painting can look just like a 3-meter painting because the color is a function.

In the early 2000s, Kryvolap returned to landscapes, but this time with his own unique voice in the project named The Ukrainian Motive. Small, sometimes inconspicuous details added to the combination of colors that provoke emotions. They seem to attach the paintings to reality, emphasizing everything you have experienced while contemplating if the painting is real.

At the same time, Kryvolap was working on a project named Horse. This was a series of bright, one-color paintings of silhouettes of horses. In 2013, the canvas Horse, Evening was sold for $186,000 at an auction at Phillips in London. As a result, this work became the artist’s calling card.

Kryvolap can be called an uncompromising artist. He never painted to order, believing that the artist should not give up his own ideas to please anyone. For example, even when he started painting the walls in the church in the village of Lypivka, near Kyiv, he did not want to neglect the inherent style of his artworks’ radical color combinations, although such a palette is not typical for the traditions of church frescoes.

He does not compliment himself either. The earlier paintings, which he considered only “laboratory research” done on the way to creating his recognizable style, were burned by the artist himself. There were so many works that he burned that the fire and smell of smoke went on for two days. Also, he has announced that he intends to destroy more of his older artworks, ultimately leaving only those that are the result of many years of style searching; those which he considers acceptable and can be considered responsible for.