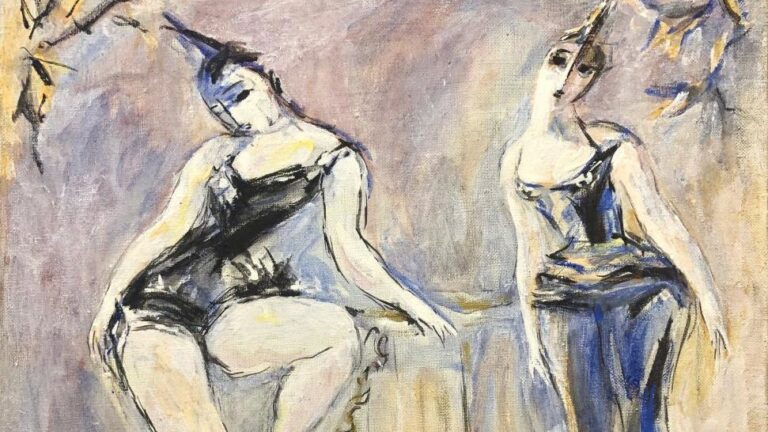 Artist Zoya Lerman is an unusual representative of Ukrainian non-conformism in painting. Despite the dominance of social realism, she was able to assert her artistic voice and the right to create her unique world of sensuality on canvases.

Most of Zoya Lerman’s creative activity came at a time when Soviet power was ruling in Ukraine (she was born on June 14th, 1934). It tried to integrate its ideology and control into all spheres of life of Ukrainians. Art was not an exception. Thus, after the 1930s, social realism emerged – a pseudo-artistic method that declared a world-view concept of a socialist society. This specific style had nothing to do with the artistic diversity, aesthetics, and uniqueness of the paintings. Art became formulaic because it had only one function – to serve the interests of the authority.

In this case, the principle of "who is not with us, is against us” was a major theme. The artists who eschewed the official art were persecuted and publicly harassed. As a result, for many years they could not even dream of having their paintings being part of any exhibitions.

Lerman became the representative of the second wave of the avant-garde – the underground. This trend was relevant in Ukraine in the 1960s to 1980s. It was then considered a radical form of resistance against totalitarianism and the Soviet authority by artists. Therefore, the underground was forbidden.

However, a branch of the underground (non-conformism) was just the unofficial art that the Soviet authorities allowed. So, to be precise, Lerman was a non-conformist who excluded the political aspect of her artworks. However she struggled for the right to express own artistic worldview. Unlike many of her contemporaries, the Sixtiers, she set herself only artistic tasks.

Zoya Lerman's paintings are full of lyricism, sensuality, and emotional undertones that she was able to recognize. Her characters are plastic, graceful, and even poetic.

However, often they are in unnatural poses and their bodies are disproportionate. It may seem that Lerman is hinting that external contentment is just a decoration, and through the body, she tries to convey conflict, disharmony. But that's not the point. Lerman just does not need accurate reproduction of people. She did not try to portray hands, feet, ears and noses. Instead she portrayed feelings and states – joy, passion, sadness, lightness, pleasure, etc.

One of the themes that the artist actively developed in her works was ballet.

"She did not quote anyone, not Degas, Picasso or Benoit ... She respected the work, weekdays, and fate of the artist and portrayed these characters – elves on stage, convicts in training rooms – without pathos, however, with great love and plastic craftsmanship", an art critic Igor Dichenko said.

Of course, in the better world of Zoya Lerman, color was an important tool. Bright colors emphasized the imagery of her work. The most unusual of her paintings were the "white ones".

The artist loved to paint on a white canvas with white paint. Entire plots were created with contours and shades only. This was because in Lerman's ideal world – a world of goodness and beauty – white meant "love".

The kindness in Lerman's paintings was taken from nowhere. This trait was also a prominent feature of Lerman herself. Her contemporaries have repeatedly told harrowing stories about her. Once, upon having received money she gave it away to people in need on the way home. Although she did not know the luxury of it herself. Another time, the artist stood up to defend a thief who had tried to steal her purse, from the police. Lerman felt sorry for destitute people – they do not have any resources for survival.

So we can consider Zoya Lerman's altruism to be one of the components of her paintings.

Choking Odor of the Real World

A lot of Lerman's paintings are dedicated to the ideas of her perfect world. However a series of events in her real life subsequently took away all the light from it. Her family home was destroyed by fire, she had a hard time coping with the death of her husband in 2001, and it seemed impossible to get support from her son’s family because of frequent conflicts.

Suddenly her life became a tragedy, and as a result the calm, non-aggressive colors disappeared from her canvases. Having lost hope that the light would somehow manifest itself in her life, she started to work on her own art world of darkness. So she went from one extreme to another.

However, she managed to make the contrast of black and white the decoration of her renewed style of artworks. She also delineated the interaction between human being and the external world with convincing intonations.