Masterpiece Story: The Train in the Snow by Claude Monet 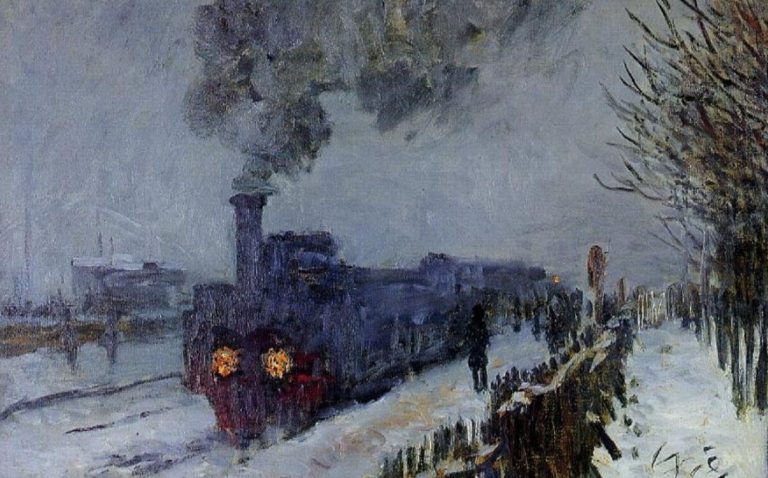 Claude Monet painted The Train in the Snow in 1875. The work was not shown in the Impressionist exhibition, but it reveals Monet’s attraction to the convergence of nature and technology, popular among artists of the Impressionist circle. The train, due to its speed and form, was a perfect subject matter for Monet and his colleagues.

This scene was painted in the railway station in Argenteuil, a little village on the Seine near Paris, where Claude Monet lived for several years, directly opposite the artist’s home.

Train in the Snow is a bit different from other Monet paintings. It combines elements of color blending to create a solid image. Unlike Impression, Sunrise this work is more concrete, it clearly depicts an event and a location. The true stillness of the moment has been captured perfectly. The short brush strokes give texture to the wooden fence posts and to the smoke from the train.

Placing the scene on a winter day helped to capture the specific sense of stillness. Not depicting the sun and grayish lighting gives this painting a timeless setting – as if the scene could happen at any time of the day. The blending of different grays and light blues gives the sky a feeling of more color than would normally be seen. Towards the vanishing point a small bright light can be seen, perhaps a lantern or a street light, signaling the arrival or departure of the train.

The mood is truly melancholic. Here we are on a deep winter day, somewhere in the French province, leaving or entering the train for reasons known only to ourselves. Would you take this trip?