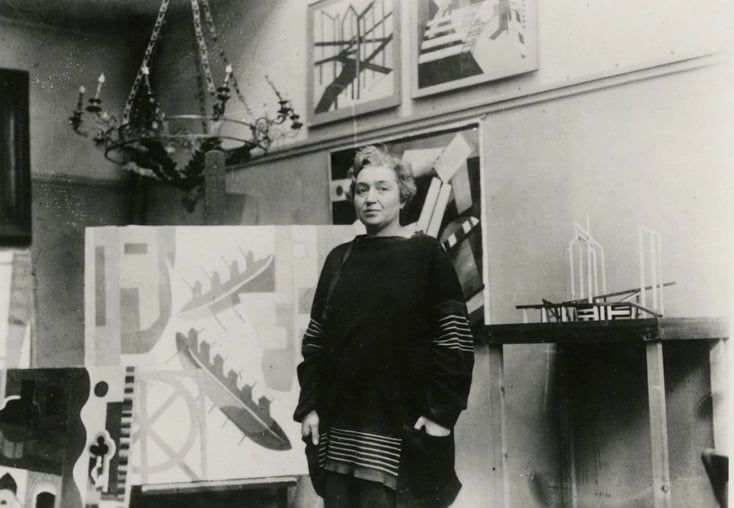 Alexandra Exter in her atelier in Paris. Alexandra-exter.com.

Alexandra Exter was a painter and designer of the Russian and Ukrainian avant-garde. Her work isn’t limited to just one genre or movement. She was a Cubo-Futurist and a Constructivist artist that influenced the Art Deco movement. Exter didn’t stick only to painting either. She did set design, book illustrations, and fashion designs. She was also a teacher. Even though Exter had a great artistic career in Kyiv, Moscow, and Saint Petersburg, she gained recognition in Paris too. However, despite her great talent and creativity, she also met her gradual downfall.

Aleksandra Aleksandrovna Grigorovich was born in 1882 in Bialystok, in the Russian Empire (today’s Poland), to a wealthy Belarusian-Greek family. Soon after her birth, they moved to Kyiv. There she attended Kyiv Art School where she nurtured her artistic talent. In 1908, she married a lawyer, Nikolai Evgenyevich Ekster.

Her studio in Kyiv was a meeting point for creative and intellectual luminaries, to name a few: Vadim Meller, Anatole Petrytsky, Anna Akhmatova, Ilia Ehrenburg, and others.

During the 1910s, Alexandra Exter lived and worked in Paris. She befriended Pablo Picasso and Georges Braque, who introduced her to Gertrude Stein. In 1910–1912, Exter’s works were deeply influenced by Cubism. However, she soon incorporated Futurism into her art. In 1912, she exhibited at the Galérie La Boétie in Paris, along with Marcel Duchamp, Jean Metzinger, and others. Two years later, she participated in the Salon des Indépendants and in the International Futurist Exhibition in Rome. In 1915, she joined the avant-garde group of artists Supremus, where she met Guillaume Apollinaire.

“Madame Exter” was very respected in Moscow, Saint Petersburg, and Kyiv. In 1915, she discovered Malewicz’s Suprematist work. Soon after she developed her own abstract language in art. Thus, she became one of the founding parents of Constructivism. It was then that she started experimenting with set design.

For instance, in the years 1918–1920, she was the leading set designer at Alexander Tairov’s Chamber Theatre. Also, in 1919, she decorated the streets and squares of Kyiv and Odessa in an abstract style for Revolution festivities, along with Kliment Red’ko and Nina Genke-Meller. Moreover, she worked with Vadym Meller as a costume designer in the ballet studio of the dancer Bronislava Nijinska.

Regarding her paintings, Exter was very productive and participated in all the big exhibitions of the era. She showcased artworks at the 5×5=25 exhibition in Moscow in 1921, along with other Constructivist artists. Exter had a distinct style. She experimented with all mediums and paid attention to color and rhythm. She used vibrant colors in playful and theatrical compositions. Furthermore, she included geometric elements. The overall result was always dynamic.

Alexandra Exter was also a great fashion designer. She experimented with transparency, movement, and the vibrancy of fabrics. She also incorporated elements of geometry and structure. So, Exter decided to take her costume design to everyday life and 1921 she began her fashion career. Her mass-produce designs were wearable while decorative and innovative. This lead her to be considered an haute couture designer.

The Russian Revolution and Emigration to Paris

The civil war caused many disasters and Exter did not escape them. After the physical and psychological tragedies she went through, Exter wished to leave Russia in 1919. However she made it only in 1924, under the pretext of exhibiting works in the Venice Biennale. She stayed in Italy for a brief period of time and then went to Paris. She remained there until her death in 1949.

During the 1920s and 1930s, she had a respectable career. In 1924, she taught at the Académie Moderne and from 1926 to 1930, she was a professor at the Fernard Léger’s Académie d’Art Contemporaine. A few years later, in 1933, she began creating illuminated manuscripts, the most important works of her last phase. Exter kept participating in group and solo exhibitions, such as Cubism and Abstract Art in New York (1936). She also worked as a book illustrator for Flammarion publishing house. Nevertheless, the European art scene was gradually losing its interest in abstract art and Exter had fewer job opportunities. She slowly started having financial difficulties that only got worse, as she had some health issues too.

During the past few decades, there has been a rise in interest for Alexandra Exter. This has lead to a dramatic increase of the price of her artworks. Consequently, several fakes have appeared on the market too.