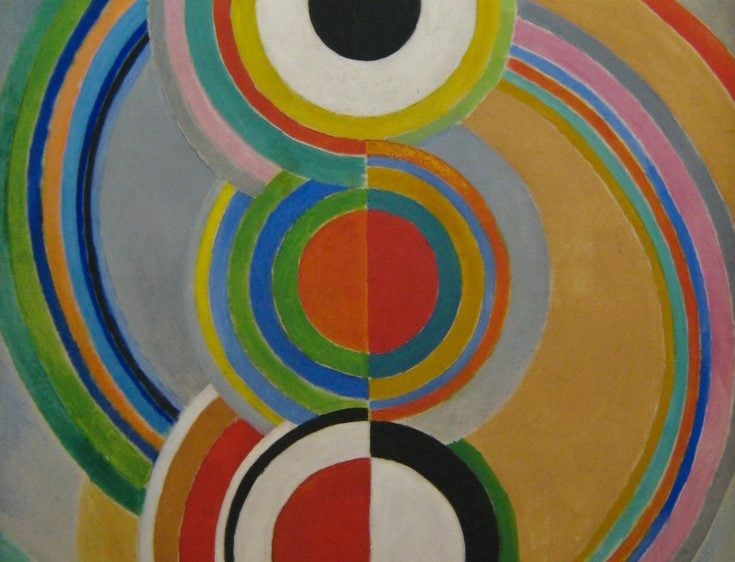 Sonia Delaunay was a busy woman. She was an officer of the French Legion of Honor, a wife of a famous painter (that's already tough) and an artist herself. On top of that she was a fashion designer! Her endeavours were appreciated: she became the first living woman to have a retrospective exhibition in the Louvre.

Co-founded by Sonia Delaunay with her husband and other artists, Orphism or Orphic Cubism, focused on pure abstraction and bright colors. Most of the people would associate this type of works with her:

But Sonia was also a fashion designer:

In a lecture she gave in 1927 at the Sorbonne she openly condemned the previous fashion: “at the present time, fashion is passing through a critical stage which corresponds to a period of revolution. Some time before the World War I it began to free itself from academic couture: it got rid of the corset, the high collar, all those elements of women’s dress demanded by the aesthetic of fashion but which were contrary to hygiene and the freedom of movement.” In return, she offered her own vision of new clothing for new women. She also designed costumes for ballets and famous actresses, like Gloria Swanson.

Her husband said about her: "Until now, fabrics were dealt with the same way as wallpaper, by the kilometre, with no conception of their future use – or at best by chance. That was up to the dress designer…(...) She gives her conception a perfect creative harmony, by thinking about all the transitions between the ready-made fabric and the final garment."

Delaunay complained in one of the letters in 1968: "All [my] works were made for women, and all were constructed in relation to the body. They were not copies of paintings transposed on to women's bodies, as one couturer has done with Mondrian and Pop Art [...] I find all that completely ridiculous. It's a promotional medium, but it isn't a basis for either development or construction: it's a circus."

Chris Dercon, the director of Tate Modern asserted: "Sonia Delaunay has been less recognised for her contribution to the history of modern art and Abstraction than she deserves, marginalised by an account of the history of art that has prioritised male artists and, at times, positioned her work as decorative."

Vivienne Westwood is a prolific fashion designer. She gained fame by making punk designs before it was cool and by bringing them to the runway. Back...

Madame Grès, The Sphinx of Fashion

During the 1930s, fashion was heavily influenced by ancient Greece. In the previous decades, there was an appreciation through patterns such as the...

Dress like a Byzantine Empress – Byzantine Art in Fashion Collections

Have you ever wondered how Byzantine art stepped onto the catwalk? It all started with Empress Theodora and a Byzantine-inspired piece of jewelry...

Heels Were Never Just For Women: Men in Heels

What do the Persians, Louis XIV, and Johnny Cash have in common? Their heeled footwear. Quite appropriate as heeled shoes were originated, and worn,...