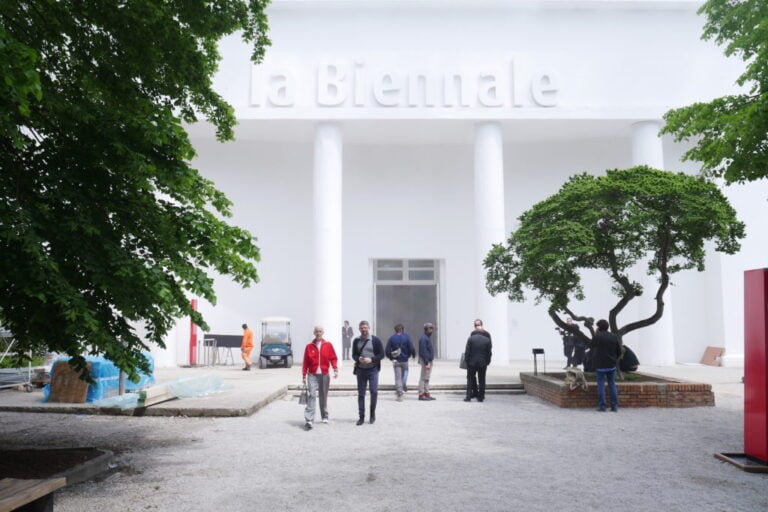 Giardini is a park hosting national pavilions of the Venice Biennale. It has been the ground for the Biennale since its beginning in 1895. Traditionally, pavilions in this location are the most prestigious and are high in the unwritten biennale hierarchy. The majority are owned by postcolonial powers and countries with the highest GDP, mostly European nations but not only. Today there are 29 national representations in Giardini and many more outside – in Arsenale and spread across the city. Below, I have listed my favourite pavilions, many focusing on climate change, dance, women and the current political situation.

Danish-Palestinian artist Larissa Sansour represents Denmark with her 25-minute long, black and white, science-fiction video, referring to anything that is cultivated outside of its original form. It’s set in future Bethlehem after an ecological disaster, a flood of black liquid running through the streets of Bethlehem causing demolitions and explosions. Two women – a dying leader and her younger successor – sit in a brutalist, concrete bunker underneath the city. The older woman recalls her memories from before the disaster. The young woman represents the new generation of people who have never been outside of the bunker. For that generation, the reality is the bunker. The women discuss their cultural memory of a place and what it means to be separated by time and distance from the original land of Palestine.  By projecting the future, Sansour refers to the present, commenting on the current situation of Palestinian people. There are two more elements of the exhibition – a large sphere with sound and an architectural intervention made of replicas of tiles from Bethlehem.

The space of this year’s Polish Pavilion resembles an aeroplane hangar with Roman Stanczak’s plane literally turned inside out, sitting in the middle. Stanczak is a slightly surprising choice for the pavilion, as he is not that well known. He studied at the famous studio of Prof. Grzegorz Kowalski at the Warsaw Academy of Fine Arts in the 1990s, but after a couple of exhibitions at important institutions, Stanczak disappeared from the art scene. It may be an unexpected choice but a good one. Stanczak’s proposition is perfect for the fast-paced nature of Venice Biennale. People usually go in and out of exhibitions quickly, not having enough time or energy to watch long videos or even look at multiple artworks. Stanczak’s large sculpture with an intelligent concept seems perfect. One walks in, has a quick look, and gets it straight away. It is quite startling that the cockpit, chairs and other interior elements are outside of the vehicle, and the wings are rolled inside. The meaning of the sculpture can be spiritual, read as a metaphor for the preparation for death, passage to the other side and creation through destruction. It is also a commentary on contemporary economic and political transformations.

Natascha Sadr Haghighian (aka Natascha Süder Happelmann), who represents Germany, tackles Europe’s current political issues connected to the refugee crisis and migration policies. Ironically, the artist is originally from Iran and changed her name to sound more German for the purposes of this exhibition. She does not reveal her full identity, including her face. Her highly political work is subtly almost abstract in the execution. The space of the pavilion is divided by a massive dam, a symbol of division and closing up. Speakers emit a loud, disturbing whistling sound, referring to a method used by migrants to warn each other by whistling when the police arrive to deport them.

The entrance to Laure Prouvost’s French Pavilion is hidden behind the bushes at the back. After climbing the substructure of the building, visitors find themselves in ‘a belly of an octopus’. The main video located in the central gallery and entitled Deep See Blue Surrounding You is surrounded by a circle of smaller galleries, each filled with installations, leftover objects from the film, resin, clay, glass, plants and even living doves. An octopus is Prouvost’s alter ego and also appears in the video. It is a oneiric, fictional film showing an escapist journey towards an ideal elsewhere. The exhibition is an invitation to melt into different realities merging here and challenging the representation of our globalized world, made of exchanges, connectivity, and discrepancies.

The exhibition Weather Report: Forecasting Future in the Nordic Pavilion, combining installation, sculpture and video, is another example of tackling climate change in the Venice Biennale.  It investigates the relationship between people and other living organisms in an age when human activity is undermining the preconditions of life on Earth. The exhibition presents work of artistic duo Janne Nabb and Maria Teeri from Finland, Ane Graff from Norway, and Ingela Ihrman from Sweden.

The U.S. is represented by Martin Puryear,  one of America’s most distinguished sculptors. The exhibition is called “Liberty” and includes eight works responding to the architecture of the building and the history of the United States. Large scale, abstract, often wooden, and beautifully crafted, these sculptures can be read in many different ways; however, a political reading is inevitable in the context of national representation. Subtle references make us think about the struggle for freedom, race and black political history in the U.S.

The Israeli representation this year is unique. Artist Aya Ben Ron transformed the pavilion into a day clinic, a “field hospital”. Visitors are invited to become patients for the next 20 minutes or so. After collecting a ticket, patients must wait for their turn while watching an instructional video. Next, during the treatment, they enter a private, soundproof booth where they are asked to scream. The treatment enables patients to find their own voices in order to be ready to react to the challenges of the world. The last part of the treatment involves lying on comfortable dental-looking chairs and watching politically and socially charged videos referring to various problems, including the Israeli occupation of Palestine. The project is very multilayered, but in a busy environment of the Venice Biennale, Aya Ben Ron has successfully made people dedicate a good amount of time to thinking about her message.

Canada continues to struggle with the legacies of colonialism, so the choice of Isuma, an Inuit art collective, to represent the country is quite significant.  The collective is led by Zacharias Kunuk, Norman Cohn, and Canada’s first Inuit production company. The exhibition’s main element is a feature-length film One Day in the Life of Noah Piugattuk. Shot in the Canadian high Arctic, it recreates an encounter in April 1961 when Inuit communities were forcibly relocated into government-built towns.

The Russian Pavilion has been transformed into an environment resembling a stage set, so it’s not surprising to find out that one of the exhibiting artists, Alexander Shishkin-Hokusai, is also a set designer. The pavilion has been curated by the State Hermitage Museum, and its director Mikhail Piotrovsky dedicated the exhibition to one of the museum’s masterpieces, Rembrandt’s The Return of the Prodigal Son.

The Korean Pavilion this year focuses on gender, with a wonderful mix of light, sound, and dance. Three exhibiting artists are all women: Jung Eun-young, Jane Jin Kaisen and Nam Hwa-yeon.  Their works emphasize gender diversity as a driving force to reread and rewrite the history and culture of East Asia.

You can also see my favourite pavilions of the Venice Biennale on YouTube!