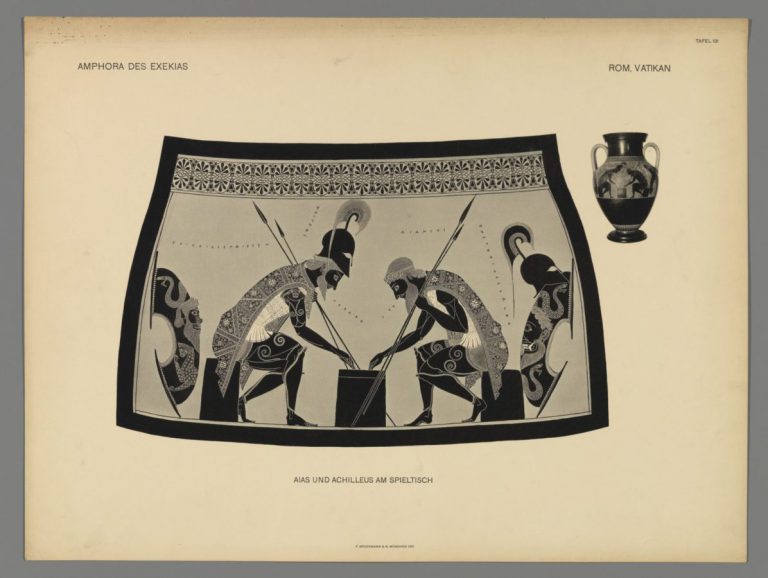 Ancient Greek literature is abundant in legendary heroes who live and die for everlasting glory. Their names and deeds echoed in the conscience of many societies for centuries and continue to do so. Naturally, these epochal literary sources such as epic poems and plays greatly influenced the aesthetics of the ancients and their tendencies when it comes to craftsmanship. Ajax is undoubtedly one of the most significant figures who come forward in many artistic forms within Ancient Greek pottery. Let us explore three canonical examples by Exekias which convey the mighty hero, Ajax.

“When his armour was in place around his body,
he moved forward, like some gigantic Ares
when he sets off to battle among warriors
whom Zeus, son of Cronos, has stirred up for war, to fight with that war frenzy which consumes men’s hearts.”

Ajax, the Bulwark of Achaeans

Ajax was one of the most vital characters in Homer’s Iliad. He was the King of Salamis, an island located in the Saronic Gulf. After Achilles, he was considered the greatest warrior among the Achaeans who fought against the Trojans in Asia Minor. He had a divine and noble lineage. His great grandfather, Zeus, held the utmost authority in Mount Olympus and was the king of all gods and goddesses. His grandfather, Aeacus, was the king of the island of Salamis. Finally, his father, Telamon, was a close friend of Heracles himself, and he too, became the king of the island after Aeacus.

In the Iliad, Ajax faces Hector, the greatest warrior among the Trojans, twice. Nevertheless, both duels ended inconclusively. At the end of the first duel, they exchanged gifts. Hector gave Ajax his sharp sword which appears as a crucial object in Sophocles’ play. Additionally, according to Arctinus of Miletus, Ajax was the warrior who saved the body of the legendary Achilles from the hands of the Trojans. Both Odysseus and Ajax desired to possess the armor of Achilles, which Hephaestus made, the smith god himself. Yet, Odysseus became the one who was able to acquire it.

To better understand these masterpieces, it would be beneficial to outline the following two terms: black-figure and amphora.

In pottery, the black-figure technique was a widespread style that was used throughout the Archaic Period, especially in mainland Greece. Red-figure painting later replaced this technique by the end of the era. Both techniques essentially follow the same three-phases of the firing process; but what sets them apart from each other is the phase in which the potter applies slip (liquid clay) on the material.

On the other hand, amphoras are jars with two handles which were used as containers to store nourishment, such as olive oil or grains.

As for Exekias, there is limited bibliographic data regarding him. What we know is that he actively created his beautiful pieces in the region of Attica between 550 to 520 BCE, which corresponds to what scholars refer to as the Late Archaic Age. His precision in black-figure technique and innovative approach to motifs distinguished him from many potters and vase-painters. In his works, he was always able to capture the spirit of the myths and legends.

Achilles and Ajax Play a Game

This particular black-figure amphora was made in circa 550-525 BCE. The Gregorian Etruscan Museum in Vatican City is currently displaying it. An amphora, such as this one, most likely belonged to a wealthy noble, as it has the type of beauty that an ordinary citizen could not afford. We have two main subjects on the amphora: on the right side, there is Achilles, and on the left, there is Ajax. We can identify who the individuals are for different reasons.

First, because our dear Exekias wrote their names just above them and the second giveaway lies in the details. The armor of the figure on the left is more emphasized. The pauldron, chest plate, and shield particularly manifest themselves by showing the touch of Hephaestus, while Ajax’s equipment is more unsophisticated. Both heroes are holding their spears, which implies that although they are in the middle of a game, they are ready to continue fighting against the Trojans at any moment. Lastly, it is important to note that this specific scene does not exist in any of the known sources. Therefore, it is either exclusive to Exekias’ storytelling or it derived from a source material which did not survive to this day.

Ajax Carries the Body of Achilles

This amphora, made in circa 540 BCE, is currently being displayed at the State Collections of Antiquities in Munich, Germany. When creating this piece, Exekias was inspired by the series of events in Aethiopis by Arctinus of Miletus, who was a follower of Homer according to certain sources. According to Arctinus’ narration, Paris killed Achilles with an arrow while Apollo helped to ensure that the arrow hit its target. Afterwards, the brave Ajax retrieved Achilles’s body, but little did he know that this act was only the beginning of a controversy that would lead to his downfall.

This amphora distinguishes itself from the two others in symbolism. All of them have the same pattern on the band, which is located on right top of the base, but this amphora has an additional one which includes two significant animals: a lion and a bull. They were initially used to represent the clash between the Mycenaeans (the Greeks/ the Achaeans) and the Minoans in certain literary sources. In this context, the same idea is implied. We have significant archaeological evidence that a bull held a special place for Trojans and in certain Ancient Anatolian beliefs. Thus, Exekias is mostly likely pointing out that this scene took place during a war between these major forces.

Ajax Prepares to Kill Himself

Although Ajax always believed that he was the one who truly deserved Achilles’s armor, others thought differently. Agamemnon, Menelaus, and arguably even the goddess, Athena, saw Odysseus as worthy of the armor. Thus, greed, envy, and anger began to poison Ajax’s mind and heart. His emotions blinded him and he eventually decided to kill his own countrymen for disregarding his achievements.

However, Athena did not let this happen. With her divine powers, she disoriented Ajax so that he would brutally slaughter a herd of cattle instead of Odysseus and the others. When the influence of Athena was lifted, Ajax realized what he had done and at that point, he only felt one thing: shame. This amphora is currently being displayed at the Château-Musée de Boulogne-sur-Mer, which depicts the final moments of Ajax, when he is erecting the sword of Hector in the ground and preparing to impale himself on it. At last, what is a warrior who has lost his honor if not a disgrace to his fatherland?

More on Ajax and the Trojan War

If you want to delve into Ajax’s journey and the war between the Greeks and Trojans even more but are reluctant to read the ancient sources, I highly recommend The Trojan War by Barry Strauss and The Song of Achilles by Madeline Miller to start with.