The A to Z of Ancient Greek Pottery Terms Pt 1 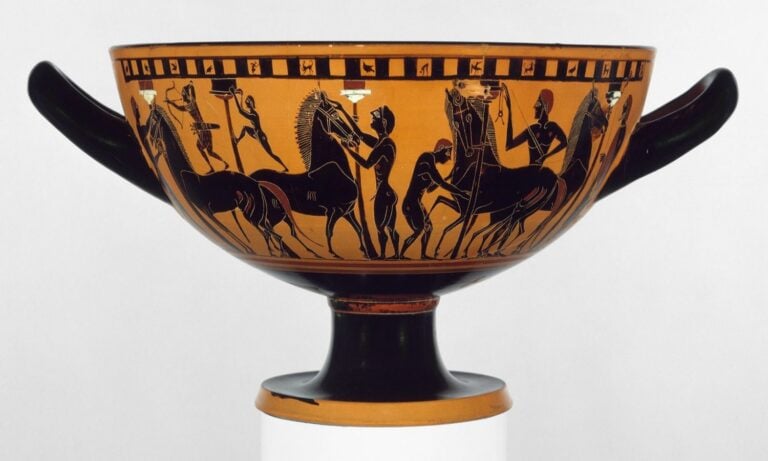 In Ancient Greece, vases were a commonplace item. There was no explanation needed as to what they were or how they were used. They each served a different purpose; likewise, there were many Ancient Greek pottery terms to go along with the different uses. In a previous post, I talked about art on pottery and how to decipher it. Now, we are going to look at pottery and the correlating terminology!

Alabastron/ pl. Alabastra – the alabastron was a plain bottle for scented oil, or perfume. The shape of the bottle gets its name from the alabaster used to make it. The bottle itself was slender, elongated, and small enough to hold in one hand. Alabastra were also used as offerings at many burial sites.

Amphora – the amphora is one of the more common shapes of vases from Ancient Greece; common enough that you might even recognize it without knowing what it is named. The amphora was an all-purpose container used domestically for small foods or liquids and in burial rites to hold the ashes of the deceased. There are a couple of different styles of amphora: amphora and neck-amphora.

Attic/Attica – Athenian and Attic are often used interchangeably. Attic refers to a region of which Athens is the capital.

Beazley, Sir John D. (1885-1970) – if there was a rock star of Ancient Greek archaeology and art history, Sir Beazley was that man. He undertook the quite large task of identifying Attic vase painters, by identifying signatures, styles, and time periods. His work was significant and remains an important foundation when studying these vases. Beazley’s life’s work is housed at the University of Oxford’s Classical Research Centre. His legacy was continued under other Classical Greek scholars, such as Sir John Boardman. If you are at all interested in Ancient Greek archaeology or pottery, these two men should be at the top of your list of people to know about!

Black-figure technique – Black-figure is one of the methods used to decorate pottery in Ancient Greece. Developed in Corinth in roughly the 8th century BC, the black figures stand out against the lighter colored clay of the vase, either a white or reddish-brown color.

Corinthian – Corinthian refers to the region of Corinth where Black-figure technique originated before it was adopted by artists in Attica. The term Corinthian also refers to an architectural term in reference to the Corinthian column.

Dinos – a dinos is a large round-bottomed bowl without handles. This particular vase was used to mix wine and water. The dinos typically required a stand; because of its bulkiness, it was generally not preferred over the kylix.

Exaleiptron – this shape was often used for liquid – another option for scented oil or perfume! Unlike the alabastron, the exaleiptron had a unique shape – similar to the dinos, but the mouth of the vase was turned inward and the body of the vase was much squatter.

Eyes – “eyes” refer to a design style painted on various vases. As the name suggests, the design looked like two eyes staring back at you. The eyes could have been man or animal, and meaningful or not.

Firing – firing is not a new term for anyone at all slightly familiar with modern pottery. Firing is the step in the pottery-making process where the vase is heated to at least 450 degrees Celsius/842 degrees Fahrenheit. In Ancient Greece, firing took place in three steps: oxidizing, reducing, and re-oxidizing. During these steps, the kiln’s temperature would be gradually lowered or raised to attain the desired effects.

Geometric – both the name of a period and a style, geometric refers to roughly 900-720 BC and the use of geometric patterns such as the meander or key. Because of their larger size, geometric pieces were also used as grave markers.

Hydria – This “water jar” was one of the most common shapes in Ancient Greece. The vase had three handles, two on the sides and one on the back, used for either holding or pouring water from the vase. Like the many other vase shapes that have already been mentioned, the hydria is also associated with death rites.

Head Vase – this one is pretty self-explanatory. It is a vase in the shape of a head or face. The face(s) ranged from animal, to mythical, to human. A janiform head vase refers to a vase with two back to back heads or faces.

Krater – a krater is a large bowl with a wide mouth and heavy, yet smaller, base or foot. Etymologically, the term Krater comes from the Greek verb “to mix.” The English word “crater” stems from this Greek vase due to its likeness to a bowl-shaped depression.

Kylix – although there are more than thirty styles of Ancient Greek drinking vessels, the kylix is perhaps the most common of the Attic vases. It is a two-handled bowl with a footed stem. They range from shallow to deep in size, stem or stemless. Because the kylix was a typical vessel at drinking parties, or symposiums, scenes of everyday life or of mythology were depicted around the surface of the kylix. The tondo, or the bottom-inside of the vessel, would often depict drinking scenes.

For more information on Ancient Greek terminology, or to learn more about what you have seen here, check out the Metropolitan Museum of Art and the John Paul Getty Museum of Art. Both have excellent resources on Ancient Greek pottery and art! Likewise, the book Understanding Greek Vases: A Guide to Terms, Styles, and Techniques is a valuable literary source. Khan Academy has also posted this educational video on Making Greek Pottery.