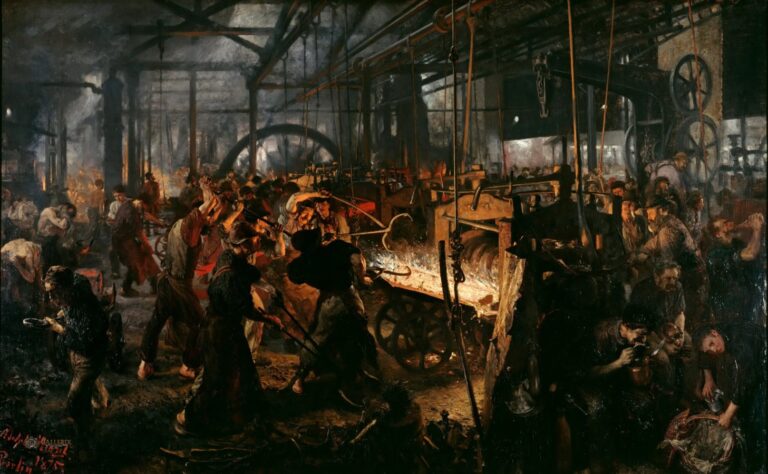 The 19th century, the age of steel and steam, witnessed not only the developments of the industry but also the new themes in painting. Now, simple workers found their place next to mythological heroes and saints, you probably know them from Gustave Courbet and Jean-François Millet works. Yet one of the most iconic depictions of physical labor in art history is The Iron Rolling Mill painted by Adolph Menzel.

Adolph Menzel (1815-1905) was one of the two most prominent German painters of the 19th century (the other one is obviously Caspar David Friedrich). He was a Realist known for drawings, etchings, and paintings. Menzel was born in Breslau, Silesia but as a 15-year-old he moved to Berlin where he studied briefly at the Berlin Academy of Art. During the early years of his sojourn in the capital, he produced mostly drawings and etchings, including a series on the works of Frederick the Great, Illustrationen zu den Werken Friedrichs des Grossen (1843-1849).

During that time Menzel started studying painting on his own and soon created a variety of works, mostly scenes of everyday life. Among them The Market-place at Verona, In the Tuileries, The Ball Supper, and At Confession. His paintings demonstrated keen observation and honest workmanship and focused on contemporary people shown during various everyday life situations. His works were appreciated not only by Otto von Bismarck and King William I but also by Edgar Degas who admired and copied his work, calling him “the greatest living master.”

The Iron Rolling Mill, also called Modern Cyclopes, is one of the most renowned of Menzel’s paintings. It’s a group scene in an industrial setting: dozens of workers are shown during the tough factory work, they are gathered around an open hearth of a furnace in the factory in Königshütte (today’s Chorzów), in Upper Silesia. Menzel traveled there in 1872 to familiarize himself with work conditions and to make some preparatory sketches. The result is overwhelming – it’s one of those theatrical paintings in which one can admire the general composition of the whole scene but can also look out for details and particular parts with their own dynamics and interactions.

In the center of the composition, Menzel placed a group of workers responsible for the crucial task of rolling the iron. Thanks to the play of light and shadow created by the artist, the viewer can almost feel the heat of the piping hot iron. The way in which the characters are shown, their positions and their tensed muscles, express their hard work.

On the right, we can see a group of people having a break from work. The tired men have a few minutes to drink and eat some simple food they brought with them to the factory. Most of the characters are focused on their own activities, however, one young boy is looking straight at the viewer and he gives quite a heavy, pitiful look. Yet Menzel’s main concern was not a social critique, but the artistic challenge of portraying the production process and the various groups of people involved in it.