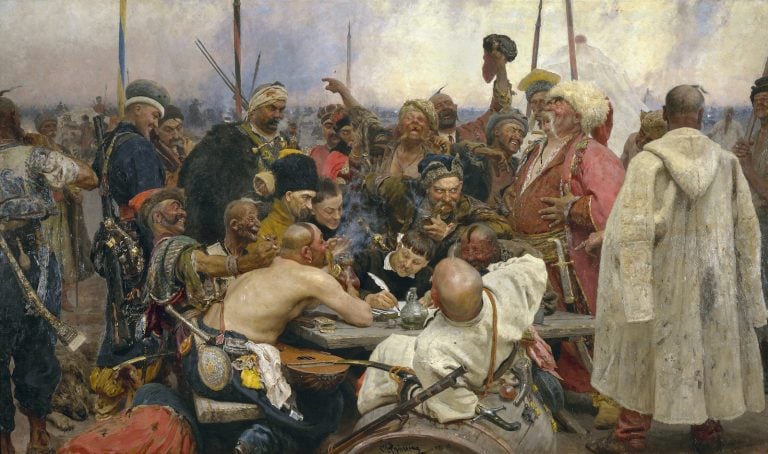 There are dozens if not hundreds of forged documents in the history of the world. They weren’t forged just for fun. Some of them were the basis of empires, like the Donation of Constantine in which Emperor Constantine made popes the most powerful rulers in the Christian world. Others gave excuses to commit some of the worst crimes against humanity, like the Protocols of the Elders of Zion. People forged Hitler diaries, Jack The Ripper letters, and even Shakespeare plays. But none of these hoaxed documents were so, hmm, creatively written like the Reply of the Zaporozhian Cossacks. It is a written letter so maybe we shouldn’t focus on it in a magazine about art history, but guess what, there is a painting depicting the story!

And it is a good story in the context of the Russian invasion of Ukraine. Or rather Ukrainian response to it. But let’s go to the point.

The Cossacks are a group of predominantly East Slavic Orthodox Christian people who became known as members of democratic, self-governing, semi-military communities originating in the steppes of mostly today’s Ukraine. They inhabited sparsely populated areas and islands in the lower Dnieper, Don, Terek, and Ural river basins, and played an important role in the historical and cultural development of Ukraine. Their semi-autonomous policy and proto-state were called Zaporozhian Sich. Until at least the 1630s, Cossack groups remained ethnically and religiously open to anybody, although the Slavic element predominated. They were free people, who through the 17th and 18th centuries were fighting against (but sometimes allies with) all of the empires around – the Polish-Lithuanian Commonwealth, Tsardom of Russia, Crimean Khanate, and Ottoman Empire. Later they became the victims of Russia. In 1775 Catherine the Great, the empress of Russia, ordered the liquidation of the Zaporozhian Sich and Cossack autonomy. In the 20th century, after the 1918 Revolution, they were against the Bolsheviks, and that caused them to be murdered and sent to the Gulag concentration camps.

Today’s Ukraine recognizes the history of the Zaporozhian Cossacks as an integral part of its own history and one of the most important sources of national identity. Even a direct reference to the Cossack tradition can be found in the anthem of Ukraine.

Reply of the Zaporozhian Cossacks

So what was the story of the Zaporozhian Cossacks’ reply? In 1676 the Zaporozhian Cossacks had defeated Ottoman Empire forces in battle. However, Sultan Mehmed IV demanded that the Cossacks submit to Ottoman rule which, even now, doesn’t sound right. The sultan sent a very elegant letter where, in addition, he emphasized his importance for the contemporary world:

As the sultan; son of Muhammad; brother of the sun and moon; grandson and viceroy of God; ruler of the kingdoms of Macedonia, Babylon, Jerusalem, Upper and Lower Egypt; emperor of emperors; sovereign of sovereigns; extraordinary knight, never defeated; steadfast guardian of the tomb of Jesus Christ; trustee chosen by God Himself; the hope and comfort of Muslims; confounder and great defender of Christians – I command you, the Zaporogian Cossacks, to submit to me voluntarily and without any resistance, and to desist from troubling me with your attacks.

The Cossacks, led by Ivan Sirko, replied less politely. Maybe it would be more accurate to say, they straightforwardly replied with insults and some profanities:

Zaporozhian Cossacks to the Turkish Sultan!
O sultan, Turkish devil and damned devil’s kith and kin, secretary to Lucifer himself. What the devil kind of knight are thou, that canst not slay a hedgehog with your naked arse? The devil shits, and your army eats. Thou shalt not, thou son of a whore, make subjects of Christian sons. We have no fear of your army; by land and by sea we will battle with thee. Fuck thy mother.
Thou Babylonian scullion, Macedonian wheelwright, brewer of Jerusalem, goat-fucker of Alexandria, swineherd of Greater and Lesser Egypt, pig of Armenia, Podolian thief, catamite of Tartary, hangman of Kamyanets, and fool of all the world and underworld, an idiot before God, grandson of the Serpent, and the crick in our dick. Pig’s snout, mare’s arse, slaughterhouse cur, unchristened brow. Screw thine own mother!
So the Zaporozhians declare, you lowlife. You won’t even be herding pigs for the Christians. Now we’ll conclude, for we don’t know the date and don’t own a calendar; the moon’s in the sky, the year with the Lord. The day’s the same over here as it is over there; for this kiss our arse!

Fantastic set of insults, you must admit. Inspiring even.

This is how an insluted Sultan could have looked like:

The story has been painted over 200 years later, by one of the most famous artists in Russian history: Ilya Repin. The painting is huge: the canvas measures 2.03 m (6 ft 8 in) by 3.58 m (11 ft 9 in) and it took 11 years to finish it. But it was worth it (at least for Repin), as the Tzar Alexander III bought the painting for 35,000 rubles, at the time the greatest sum ever paid for a Russian painting. Since then, the canvas has been exhibited in the State Russian Museum in Saint Petersburg. It is a very typical historical painting – the scene is crowded, everyone has his role in the process of writing the message. The guys seem to be having a lot of fun. Repin as a Realist painter, tried to depict the scene in the most possible and detailed way. But how did Repin come up with an idea to paint this story in particular?

When Repin heard the Cossacks letter for the first time he felt inspired. We can’t judge him – when I read it for the first time 100 years after him, I was enchanted as well. But the thing is, the letter… is probably a hoax. Yes, I was also disappointed!

The story itself is true. The Cossacks didn’t want to bow in front of the sultan and wrote him a response. But, the original of the letter has not survived our times. Suddenly, in the 1870s a copy of the letter century was “found” by an ethnographer-hobbyist from Dnipro (then Yekaterinoslav) called Novitsky. The weird thing is, that the letter was supposed to be translated from… Polish. Which doesn’t make much sense.

Novitsky gave it to the well-known historian Dmytro Yavornytsky. Yavornytsky is recognized as one of the most prominent researchers of the Zaporozhian Cossacks from the time of the Cossack Hetmanate, and the author of their first general history. He is widely known in historiography as “the father of the Zaporozhians” so he was a good person to receive the letter. Yavornytsky from time to time read it to cheer up his guests, among whom was Ilya Riepin. The painter became interested in the whole story and in 1880 he started working on the painting.

These facts (the sudden finding, the text being in Polish, the lack of proper examination and, hmm, the style of the text) put the document under doubt. Historians now believe that it would really be a parody of a response to the letters that the king of Poland received from the sultan in the same sense, thus created by the Polish elite for fun.

But other historians maintain that it is authentic and was indeed written by Cossacks. Probably we won’t know the truth until the original is found. But we must admit – the text itself should get a literary Nobel prize!

I believe that the text of the response, once read or heard, stays with you and has an inspiring effect. There are countless visual parodies of Repin’s image. The French poet Guillaume Apollinaire wrote a versified version of the letter (Réponse des Cosaques Zaporogues au Sultan de Constantinople) as part of his poem La Chanson du mal-aimé in his collection of poems Alcools. This version of the letter was set to music by Dmitri Shostakovich in his Symphony No. 14, amongst other poets like Lorca and Rilke, writing about death. But I must say, it is not so charming as the original falsification.

In the Eastern European cultural circle, Repin’s painting is widely known. It has been remixed and reminded multiple times in moments of historical significance – especially during war ultimatums. No surprise that it has been revoked now, during the Russian invasion of Ukraine.

This photo had been created in June 2021, so half a year before the war, where we can see the response of Ukrainian parliament members to Wladimir Putin’s essay about the unity of Russians and Ukrainians. They laugh, because representing Ukrainians and Russians as one nation is a part of Russian propaganda. Ukraine is a separate nation, and since 1990 with its own sovereign country.

Ukrainian MPs have recreated the famous Reply of the Zaporozhian Cossacks painting by Ilya Repin as they pen a response to Vladimir Putin’s absurd “Historical Unity of Russians and Ukrainians” essay. pic.twitter.com/plDeYXXmSk

Now, in 2022, a day after Russia invaded Ukraine, on February 25th Russians approached Ukrainian Snake Island, a tiny island on the Black Sea of strategic significance. The audio recording of this encounter hit the media: on it, we can hear how the Russian officer says:

The response of the internet was:

It is visible how the probably false response of Zaporozhian Cossacks and Repin’s painting is still alive in culture. Especially now, both the painting itself with contemporary add-ons and the photos with the Ukrainian army recreating the scene becoming viral.

After finishing his painting, Ilya Repin didn’t feel good with it. He decided to paint asecond version, more historically accurate which is now in the collection… of Kharkiv Art Museum. Kharkiv in Ukraine, which is now being shelled by Russian troops.

Let’s end this article with the Kharkiv version of Repin’s masterpiece.