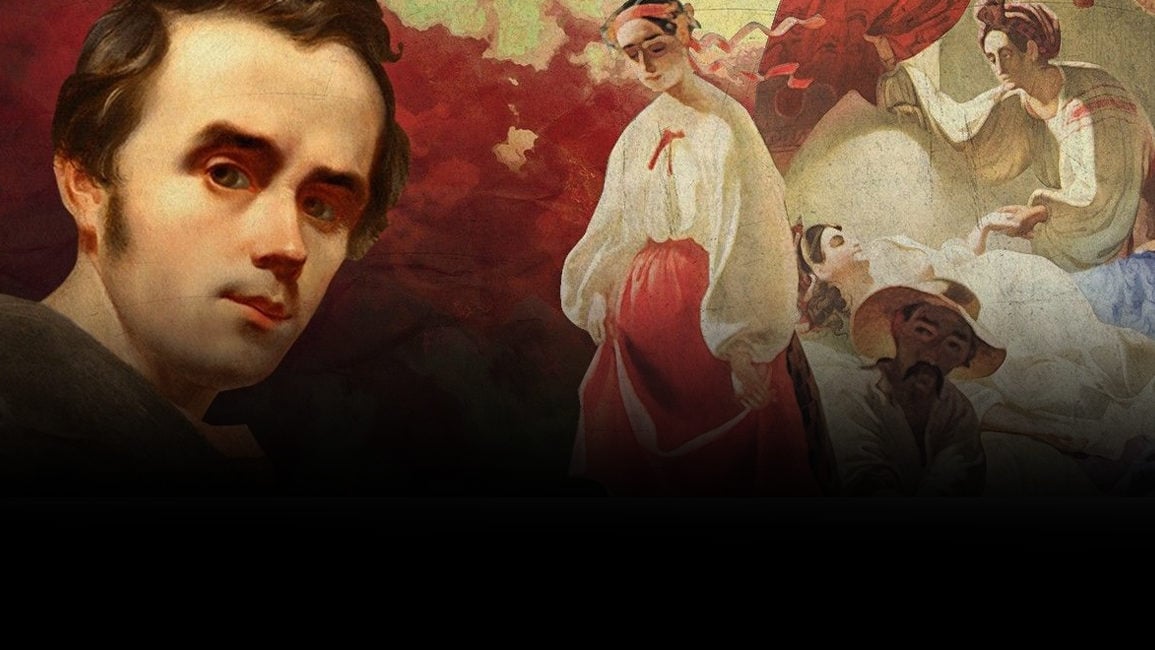 Taras Shevchenko was an outstanding Ukrainian artist and poet. Born to peasant family, he became a Ukrainian liberty idol and national, artistic hero. His artworks reflect critical problems of a 19th-century Ukrainian society. Yet today, his ideas are fresh and relevant.

Taras Shevchenko (1814-1861) was born on March 9th, 1814 in village Moryntsi, Ukraine. His parents were serf peasants, so nothing predicted glorious future for Taras. Till 1861 Ukrainian peasants were a property of their landlords who mostly treated bad those poor people. But nobody’s cruel will can break true talant. From the age of 8, Taras started to take some grammar classes at a local precentor. And from this time the small boy started practicing at drawing. Afterwards, Shevchenko took lessons at various precentors. But not all of them really taught pupils. Because most of them were alcoholics.

When Taras turned 14, his master Vasyliy Engelhardt (1755-1828) died and his heir, Pavlo Engelhardt (1798-1849), inherited the wealth. Under Pavlo’s rule, Shevchenko became a room servant. Once, while the landlord was absent, Taras was drew a picture of Cossack Matviy Platov. Suddenly, his master arrived and caught him by the burning candle. Engelhardt complained that he could have burned the house down. Furious, and complaining that Shevchenko could’ve burned the house down, the landlord ordered him to be whipped in the stables.

Nonetheless, Pavlo Engelhardt appreciated the talent of his serf. It was trendy to have a home artist at that time. Later, the master took his servant to Vilnus where Shevchenko learned more about art. As a boy he became fascinated with art and painting; at age 16 he did his earliest surviving artwork, The Bust of a Woman. This picture is stored in The National Taras Shevcheko museum in Kyiv, Ukraine.

Intent to turn his servant into a chamber painter, Engelhardt traveled to Saint Petersburg with Taras, where famous artist Vasiliy Shiryaev became Shevchenko’s private teacher in St. Petersburg. At nights and in his free time, Taras went to the Summer Garden to draw statues and to compose his early poems.

About my first literature experiments I can tell the only thing: they started at the Summer Garden during moonless nights. Ukrainian harsh muse avoided my taste, perverted by my school life, in landlord’s hallway. But when the breath of freedom brought my feelings back to the innocence of the first years of my life. It [Ukrainian muse – author’s note] embraced me by the foreign side. The first of my weak experiments, written in the Summer Garden, was Prychynna

From the letter to “People’s reading” editor-in-chief

During his studying in Petersburg he was prolific, and gained many achievements, including securing a gold medal at the Imperial Academy of Art, and participated in the painting of Bolshoi Theatre in Moscow as a junior artist.

Once, when painting in the Summer Garden, Shevchenko, made acquaintance with Ukrainian artist Ivan Soshenko (1807- 1876). Ivan introduced Taras to a community of famous painters such as Karl Brullov (1799 -1852), Vasiliy Zhukovskiy (1783-1852), Vasiliy and Alexei Venetsianov. Shevchenko visited The State Hermitage museum where the young peasant artist saw paintings of van Dyck, Rubens, Velasquez and others.

In the spring of 1838, Karl Brullov and Vasiliy Zhukovskiy decided to free Shevchenko from serfdom. Engelgardt agreed, but price was huge – 2,500 rubles – the price of an entire estate!

To earn money, Brullov painted a portrait of Zhukovskiy who was a teacher of Russian throne heir. Incredible, even Imperial family took participation in auction!

In April 1838, Shevchenko found himself free. Then, he entered the Imperial Academy of Art and graduated it successfully. Because of his peasant background, many people figured Shevchenko to be poorly educated. However, he impressed with knowledge and skill earned through his own efforts, from his presence in the highest circles of the intelligentsia of the Russian Empire, and his studies at the Academy of Art. Taras became the favorite student of Karl Brullov.

Shevchenko’s poems overwhelmed Ukrainian society. They are full of pain and sorrow for Ukrainian people whose lives are a chain of miseries. Shevchenko was the only Ukrainian painter who brought up themes of liberty that resists the cynicism of powerful aristocrats. A special place in his artwork is dedicated to Ukrainian women’s fate. For instance, Shevchenko presents the most common character of Ukrainian women: “pokrytka”(litteraly – “covered girl”). “Pokrytka” is a young girl who lost her virginity before marriage and gave a birth to the child.

Kateryna (Catherine) is the main heroine of self-titled poem. It is a story of young girl seducted by Russian officer. Learning she is pregant, and the recipient of rejection both from her family and society, she runs away into self-exile. Alone and disgraced, she walks toward a tragic death and bidding farewell to unfaithful Muscovites.

But not with Muscovites,

For Muscovites are foreign folk,

They do not treat you right.

Ukraine is the leading topic of both Taras Shevchenko’s paints and poems, and critics made a point to complain that Shevchenko chose to write in Ukrainian. But, interestingly, Ukrainian grammar was non-existent in the 19th century. Shevchenko wrote Ukrainian words using Russian letters.

Taras disapproved of the monarchy and criticized Russian emperors who established serfdom in Ukraine. His strict anti-monarchistic poem Caucus inspired the government to arrest him. However, Taras Shevchenko encouraged the idea of Slavic brotherhood. Ukrainian artist wasted time in prison and exile over 10 years forbidden to write and draw. Though he was forced to over 10 years of exile and imprisonment, forbidden to formally write or draw, he carried on creating poems on small pieces of paper. There aren’t enough words to tell about fully cover the scope and uniqueness of Taras Shevchenko’s legacy However, the following quote by Ukrainian writer, Ivan Franko, is an admirable start.

“He was a peasant’s son and became a prince in the 26 realm of the spirit. A became a great force in the community of human culture. Simply man discovered a newer and freer order for professors and scholars. He suffered ten years from Russian militarism, but has done more for the freedom of Russia than ten victorious armies.