The Most Colorful Places in the World 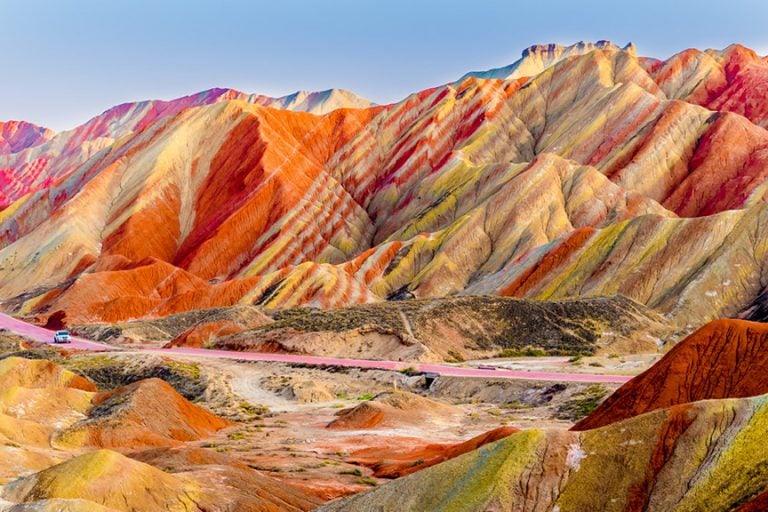 A masterpiece is not solely an artist’s work, it can also be committed by our wonderful Mother Nature. Mountains, beaches, forests and meadows are some of the most colorful places in the world. Let us hope this collection of colorful landscapes inspires you to visit them!

This colorful landscape is Dallol, a cinder cone volcano in the Danakil Depression. Unlike a conventional volcano, Dallol is a canvas of bright greens, reds, and yellows. These colors have been created by the hot acidic springs and mounds of salt deposits that are found there. The Danakil Depression has extreme concentrations of salt, potash, and other minerals combined with very high temperatures. However, the landscape remains dynamic with new springs and salts continuously appearing. Inevitably, the place attracts a lot of tourists but also many geologists who help the tourists to study how life began on earth.

This underwater landscape is the largest coral reef system in the world, spreading over 2,300 kilometers off the coast of Queensland. The reef was created by tiny organisms called coral polyps and the result is a natural wonder that is home to countless sea creatures and fish. In fact, the area is so unique that, in 1981, UNESCO declared it a World Heritage Site. In 2019, a major environmental campaign was started in Australia called Citizen Reef. This gives citizenship status to the Great Barrier Reef which means that it will be protected from damages of excessive tourism and climate changes. Now, this Aussie icon can live a long and healthy life!

No matter how beautiful Lake Natron in northern Tanzania looks, do not go in it for a swim! The lake’s unique bright red color comes from the active volcano named Ol Doinyo Lengai, which is close by. Alkaline levels, sometimes as high as 10.5, are combined with very high levels of sodium carbonate. The stunning red color is caused by Haloarchaea, microorganisms that love salty water. However, when the water level is high, the lake is supposedly less dangerous. It is then that more than two million lesser flamingos use the lake as their primary breeding ground!

Situated near Lake General Carrera of Patagonia in Southern Chile, the Cuevas de MaCuevas de Marmol, or Marble Caves, form the most beautiful cave network in the world. Also called the Marble Cathedral, these caverns are part of the marble landscape that lies near the Chile-Argentina border. The caves were formed around 6,000 years ago as a result of the waves in the lake crashing against the rocks. The swirling patterns of blue are reflections of the lake and the depth of shade changing is a result of water levels and the seasons.

The Zhangye Danxia National Geological Park is home to the Rainbow Mountains in Gansu, West China. It seems as if these mountains have been painted in all possible colors of nature’s palette! Billions of years of weathering, water erosion, strong winds, and climate changes have shaped the sandstone into rolling hills of color with red remaining dominant. The beauty of the hills is enhanced at sunrises and sunsets. No wonder National Geographic selected the Rainbow Mountains as one of the Top 10 Geographical Wonders of the World.

A well-known author once said:

Autumn is a second spring when every leaf is a flower.

This is particularly true of Vermont, New England, United States. As autumn descends there, the place turns into a magical and mythical place of reds, oranges, and yellows. The forest there covers almost 75% of the place and the area has the highest percentage of maple trees in the country. As Vermont’s fall foliage bursts into colors, it is definitely the most colorful place on earth!