What the Ermine Saw. The Dark History Behind Lady with an Ermine 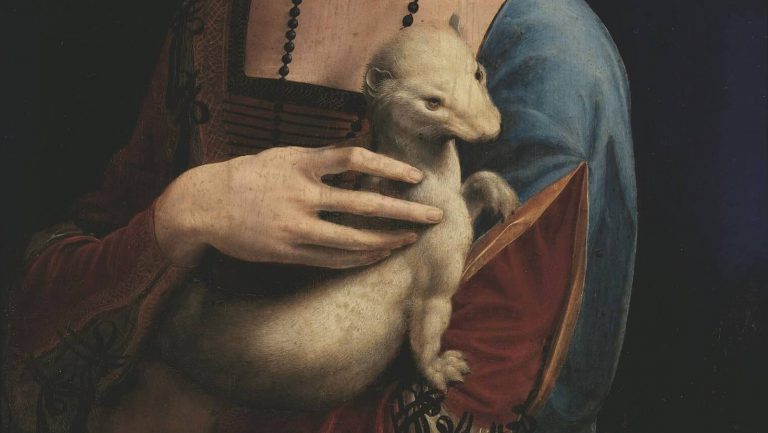 Lady with an Ermine and Its Long Life

Lady with an Ermine has a varied and dark history. Leonardo created it amidst the disturbing gender politics of late 15th century Italy. Duke Ludovico Sforza of Milan commissioned the portrait to commemorate his young mistress Cecilia Gallerani.

Then, the painting fell off the record for about 250 years until the princely Czartoryski family of Poland acquired it around 1800. Despite being stolen and relocated by the Nazis, Lady with an Ermine remains in the Czartoryski collection today. Now the Princes Czartoryski Museum is a branch of the National Museum of Krakow.

During the Soviet and post-Soviet periods, the painting traveled around the world as a sort of unofficial Polish ambassador. It certainly has a dramatic history, but not an unusual one for a famous work of art. The four major periods in the painting’s life – its creation, acquisition by the Czartoryski family, World War II, and the decades since – each get their own section of the book.

Despite its long life, Lady with an Ermine often fades to the background of its own biography. Perhaps this is unsurprising, given the 250-year gap in the painting’s provenance and the very short list of owners since then. Just stating the facts of the painting’s movements wouldn’t make for much of a story.

Accordingly, Collinsworth’s text goes off on long tangents about things like the career of Ludovico Szfora’s sister-in-law Isabelle d’Este and the convoluted love life of one-time portrait owner Izabela Czartoryska (the latter required a flow chart of lovers to properly explain.) I found the section about Czartoryska, her son Adam Jerzy Czartoryski, and their fight for Polish independence to be wonderful. The chapters dedicated to the Nazi occupation of Poland during World War II are, of course, far less cheerful.

It seemed to me that Collinsworth struggled to fill out the book, which is understandable. No matter how complex a painting’s history is, it rarely fills a full-length book all by itself. That’s why most authors go into other details about key players, contemporaneous events, relevant ideas, etc. Some of this enhances the main narrative, while other sections are probably more accurately characterized as informative intermissions.

What the Ermine Saw spends much more time on side stories than it does on material directly related to the painting itself. For example, it barely addresses the later life of the portrait’s subject Cecilia Gallerani, despite indicating that she continued to enjoy prominence. It seems that the portrait itself did not interest the author as much as the tangential happenings around it. Perhaps this fits the meaning of the title; the book isn’t about what happened to the ermine, but rather what happened in the ermine’s vicinity (what it would have seen).

I appreciate how successfully Collinsworth resisted the temptation to mythologize Leonardo. In much of the literature about him, authors get caught up in the popular aura surrounding this legendary artist to a frustrating degree. These works can resemble particularly fanciful saints’ lives more than nonfiction history books.

By contrast, this book certainly talks about Leonardo, but he doesn’t take up any more time and focus than he needs to as the creator of the portrait. In fact, I feel that the narrative could have talked a little more about how Leonardo’s worldwide fame impacted Lady with an Ermine. The book takes the painting’s celebrity for granted but does not much explore it. I got the impression that not many people have had the chance to see the portrait until the past few decades, so how did it become so famous?

I enjoyed What the Ermine Saw, but not as much as other such artwork biographies I’ve previously read. The painting’s story does not get the book’s main focus, but there’s plenty of other drama to go around. Yet be warned; not all of it makes for relaxing reading.

What the Ermine Saw. The Extraordinary Journey of Leonardo Da Vinci’s Most Mysterious Portrait by Eden Collinsworth was released by Doubleday on May 24, 2022. You can order it as a physical book, e-book, and audiobook from Amazon, Barnes & Noble, Audible, and more.

Painter, poet, printmaker (and even called a prophet by many) of the pre-Romantic period in UK, William Blake is the subject of a new book published...

Gio Swaby’s First Solo Show on Tour Through the States

Women and people of color are severely underrepresented as artists in the Western art tradition. Praised masterpieces hang on the walls of major...

Art and Technology at the Venice Biennale 2022

The Venice Biennale is considered the world’s most famous international exhibition of contemporary art. Since its official opening in 1895, the...

Psychological Thriller She Will – A Film Directed by Charlotte Colbert