5 Reasons Why You Should Visit Sforza Castle Pinacoteca 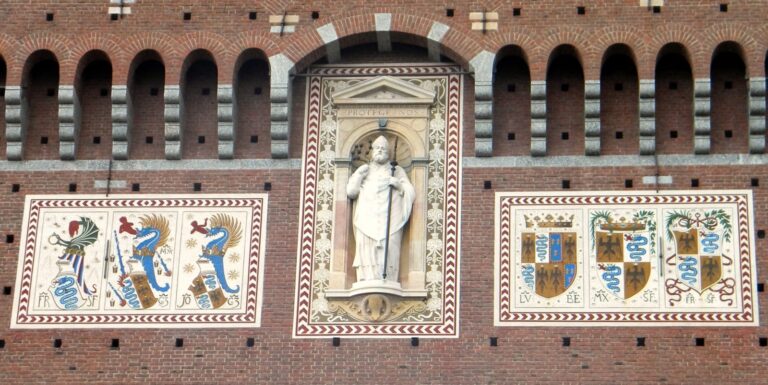 If you ever come to Milan, you have to see this place. Sforza Castle was built in the 15th century by Francesco Sforza, Duke of Milan, on the remains of a 14th-century fortification. Later renovated and enlarged, in the 16th and 17th centuries it was one of the largest citadels in Europe. Extensively rebuilt by Luca Beltrami in 1891–1905, it now houses several of the city’s museums and art collections – including The Sforza Castle Pinacoteca.

Inaugurated in 1878, gallery displays over 230 artworks, which include masterpieces by Titian, Andrea Mantegna, Canaletto, and many many others. The complete collection of the museum, enriched in the last two centuries by donations of illustrious citizens and collectors, now has more than 1500 artworks. Here they are: 5 reasons why you should visit Sforza Castle Pinacoteca – and guess what, all of them are the great Renaissance paintings:

Madonna of humility refers to artistic portrayals of the Virgin Mary which depict her as a Madonna sitting on the ground, or sitting upon a low cushion. She may be holding the Child Jesus in her lap. The term Virgin of humility is also used to refer to this style of depiction. This painting was originally in the Florentine church of Santa Maria del Carmine. Lippi was inspired by Masaccio’s works at Brancacci Chapel there.

2. Vincenzo Foppa, Madonna of the Book

Vincenzo Foppa was the leading figure in Lombard painting until the arrival of Leonardo da Vinci in Milan in 1481/2. This is his early work. The small panel can be read almost as an experimental exercise, produced by an artist at the very start of his career. The geometrical frame is defined with precision and is enlivened by a beaded garland of the type used by Mantegna. Foppa is tentative but full of poetry in the way he portrays the Virgin and Child, who, unusually, is dressed in a Roman-style singlet – another borrowing from Mantegna, as is the Roman lettering on the surround.

Francesco Galli was one of the lesser known artists who were under a visible influence of the works by Leonardo da Vinci. The painting for years has been attributed to Leonardo himself. The title of the painting is a homage to Amadeo Lia, who donated this painting to the city of Milan in 2007.

4. Lorenzo Lotto, Portrait of a youth with a petrarchino

Lorenzo Lotto was famous of implementing innovations to his portraits. He was active during the High Renaissance but his nervous and eccentric posings and distortions represent a transitional stage to the first Florentine and Roman Mannerists of the 16th century. The young man here reads a book with a Petrarch’s poems. The true identity of the man in unknown.

The painting takes its title because of the Count Gian Giacomo Attendolo Bolognini who donated it to the museum. The paintings of this kind were very popular in High Renaissance. Madonna with little Jesus and John the Baptist are equally important as the landscape in the background. It’s probably the view of the countryside surrounding the painter’s home town.