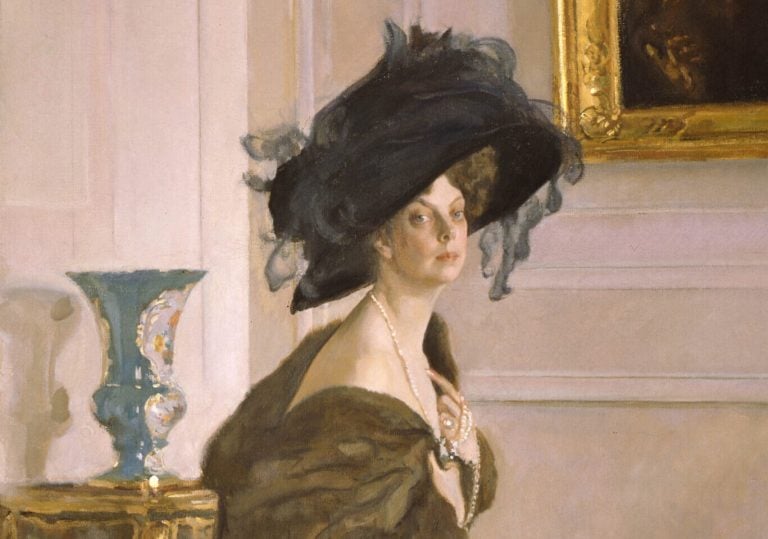 Late Tsarist Russia evokes images of great social inequality in respect of health, wealth, and happiness. In addition, it evokes images of extreme luxury, smothered in expensive fabrics and furs and layered in diamonds and pearls. Valentin Serov captured this glittering world through his evocative portraits of aristocrats and intellectuals. Princess Olga Orlova is one such masterpiece. Here, Serov captured the lioness of Russian society while proving himself to be one of Russia’s foremost artists at the turn of the 20th century.

Valentin Serov developed as an artist in a Russia stifled by conservatism. Another trait was a reluctance to embrace progress. In fact, Tsarist Russia was a society split between a Slavic Orthodox culture and Pro-Western reformers. Tsar Peter the Great had created this schism when he became the first Tsar to refer openly to the West for inspiration. This applied in many aspects of life in Russia, including the arts. For over 200 years, from the beginning of Peter’s reign in 1682 to the completion of Serov’s Princess Olga Orlova in 1911, Russia imported its artistic principles and standards from the West, notably from Paris, France.

However, Russia did not become a mere copycat of its Western neighbours. Over those 200-plus years, Russian art had developed stronger overtones and symbolism compared with the art of France and the West. Autocratic censorship affected Russian art, making its subjects more politicized and scrutinized. Therefore, Princess Olga Orlova is not simply a portrait of a Russian high society lady. Rather, it is a symbol of Russian high society and what it means to belong to that society.

Valentin Serov taught at the Moscow College of Art from 1897 to 1909. Here he rubbed shoulders with the Rasnotshinz intelligentsia or the non-aristocratic thinkers important to intellectual and social progress. As a result Serov caanot be pigeon-holed as merely an uninspiring society painter using an Impressionist style. Instead, he explores the human dimension of his sitters, something that equally interested the French Impressionist painter Edgar Degas.

Princess Olga Orlova is proud and narrow-minded, and Serov captures this haughty spirit on canvas. He believed the princess’s facial expressions revealed her personal character and emotional profile. Thus his portrait pays close attention to her facial expression. Her eyes are in soft focus but with a condescending look as she reveals her inner feelings of superiority, snobbery, and elitism. She is the result of centuries of privilege and pedigree and her icy façade only enhances that cool and controlled demeanor so typical of her elite class.

Princess Olga Orlova is not a beauty. She has balanced features but her eyes are rather bulbous and her nose is quite strong. However, despite her lack of natural beauty, she has an abundance of artificial beauty. During her lifetime, she was known as the most elegant woman in Saint Petersburg, Russia. In particular, this label resulted from the graceful way she wore hats. No one wore a hat better than the Princess Olga Orlova! Serov captures this refined, but trivial accomplishment superbly. The black hat is a confection of fabric and feathers. It sits firmly but modishly upon the princess’s head at an alluring angle. Serov has provided this hat as a dramatic contrast to the surrounding pale background. Placed thus, it frames the Princess’s face as a point of focus and interest.

The Princess wears clothes which reflect her station in life. She is clad in plush furs. Round her neck lies a long string of pearls which she wraps coyishly around her left hand as she lightly touches her upper chest. Her exquisite, bared shoulders provide a smooth contrast to the bristly fur coat. The pearls add a ribbon of shiny reflection against her pink matte flesh. A luminosity shines through her skin. Without question, in Princess Olga Orlova, Valentin Serov depicts a woman completely in control of her physical charm and elegance.

Valentin Serov might be considered an Impressionist painter due to his delight in light and color. This is further demonstrated through his style of brushstroke, and his delicate handling of outline. In Princess Olga Orlova several French artistic elements from the 1870s can be found. In particular we see elements from the earlier careers of Édouard Manet and Pierre-Auguste Renoir. This 40 year lag in artistic style is due to the “time lag” found in Tsarist Russian art compared to 19th century France, the source of Impressionism.

Historically, Tsarist Russia appeared reluctant to adopt new styles and techniques. In fact, Russian Tsars historically preferred realism because Impressionism had too many overtures of subjective truth and individual creativity. Moreover, Impressionism challenged the status quo of Tsarist Russia. As a result it took over 40 years for the style to finally become accepted by the upper elites and only after its original overtures and associations had weakened. Thus Princess Olga Orlova ironically combines a revolutionary style of painting with a traditional subject.

Valentin Serov explores the phenomena of light and the vibrancy of strong colours in his Princess Olga Orlova. He has created a portrait in the grand style, full of sumptuous dress and sophisticated furnishings. A gilt-framed painting is hanging on the wall. A Sèvres-looking vase stands on the Boulle-looking table. Finally, we are shown Louis XVI white wall panelling. Together, these elements add to the image’s opulence and provide the material evidence of the patrician world of Princess Olga.

When Princess Olga Orlova was revealed in 1911 at the Esposizione Internazionale di Roma, Valentin Serov was instantly praised for his virtuosity. Without question, Princess Olga Orlova is a masterpiece of both Russian Impressionism and Tsarist Russian art. It now hangs in the State Russian Museum of Saint Petersburg, Russia.