Painting of the Week: Saint George and the Dragon 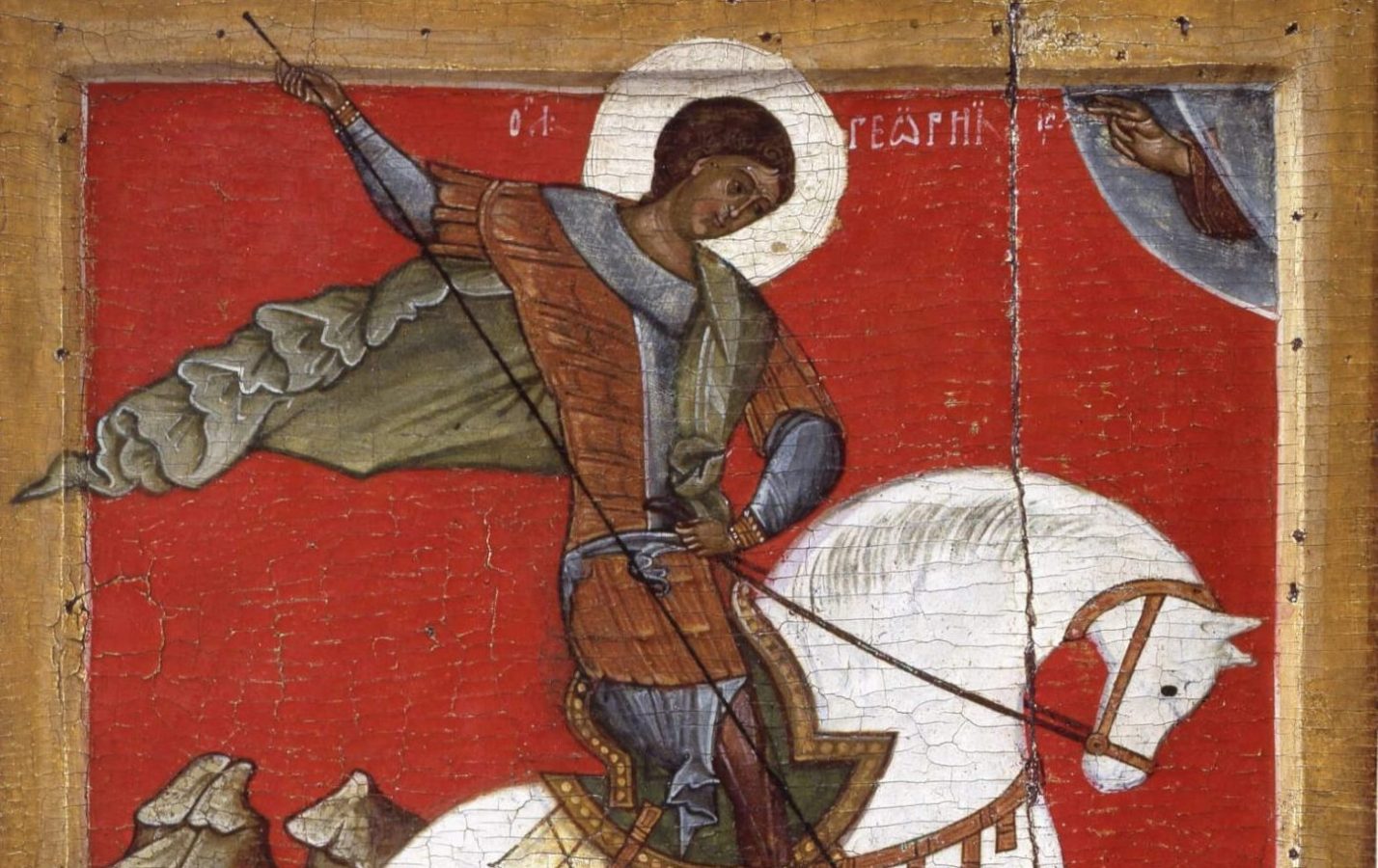 There is a skirmish between the hero and the villain. Fabrics whip about, horse hoofs trample, and a dying scream erupts as Saint George slaughters the Dragon. The Christian saint kills the horrible creature as an act of religious zeal and civilization overcoming anarchy. Since the 10th century, Russian artists have been capturing this dramatic tale through countless painted images. One such image, Saint George & the Dragon, painted by an unknown artist, now hangs in the State Russian Museum of Saint Petersburg, Russia. Saint George & the Dragon captures the Russian spirit and its long and complicated history. It may appear to be simply a Russian icon, but it is a symbol of Russian culture.

Saint George & the Dragon represents the culmination of artistic development spanning over 1,000 years. In 324 the city of Constantinople, modernly known as Istanbul, was founded as the “New Rome.” It was the capital of the Eastern Christian Roman Empire, known more commonly as Byzantium. The Byzantine Empire was the last bastion of Roman Christian culture as the Western Roman Empire crumbled to invaders. Byzantium was a Christian buffer against Islamic expansion into central and northern Europe, but also acted as an expanding Christian influence on its neighbours. It was from Byzantium that Russia obtained its Orthodox religion, its reverence of icons, and its alphabet through religious influence and conversion. Saint George & the Dragon is one of the many images found in the wide repertoire of Russian Orthodox icons.

The story of Saint George & the Dragon was first recorded in the 10th century during the time of the First Crusade (1096-99). The painting depicts the essence of the tale. The Christian Saint George was inspired to seek out and slaughter the evil Dragon roaming the countryside. The Dragon demanded human sacrifice, like the ancient Greek tale of Perseus and Andromeda, and the Dragon was also attacking a princess. There are definitively pre-Christian origins to the tale of Saint George & the Dragon. However, with the hand of God featured in the upper right corner, this painting takes on a Christian morality and religious zeal. Saint George is being blessed by the hand in an act of protection and following God’s will.

Saint George & the Dragon is painted in the late Byzantine style that is harmonious with the Russian Orthodox religion. It features strong patterns as seen in the fluttering cape, firm lines as seen in the dragon’s body, and intense contrasting colours as seen in the horse’s head. These three stylistic elements heighten the legibility of the icon as it would have been seen in its original spatial context.

Originally the icon would have been carried inside a dimly lit church with only flickering candles to illuminate it through the church’s clouds of smoky incense. If the painting’s visual style was more subdued and understated, then its visual impact would be lost in the dark church interior. The painter of Saint George & the Dragon understood that strong patterns, firm lines, and intense colours are necessary if the painting’s audience is to clearly see and understand it. Paintings like Cavaliere d’Arpino’s Perseus Rescuing Andromeda and the Faras Gallery Saint Anne do not have the same visual intensity.

Saint George & the Dragon follows the persistent and conventional vision that the spiritual world is insusceptible to change. The earthly world is in constant flux, but the spiritual world remains static and consistent. It does not change and evolve. It is a constant source of inspiration through its steadfastness. This spiritual outlook is seen in the absence of shadows throughout the painting. There is a slight shading around Saint George’s chin to define his jawline, but there are not the shadows we would associate with a brilliantly lit scene. We would expect shadows painted on the ground beneath the saint and his horse. The dragon would cast a shadow beneath his flailing and dying body. There is a clear lack of shadows because shadows imply time. They are dependent upon the time of day and the location of the sun. Both elements tied to the earthly world and not the spiritual world. In the spiritual world everything is illuminated by God’s presence, and it is eternal and timeless. Therefore the painter of Saint George & the Dragon translated this viewpoint by excluding naturalistic shadows.

Many scholars believe this painting is strongly influenced by Andrei Rublyev who is considered the master of Russian icons. He lived in the late 14th and early 15th centuries. Therefore depending on when Saint George & the Dragon was painted, the unknown artist could have been a contemporary or in the generation following Andrei Rublyev. This theory is backed by the use of a white halo surrounding Saint George which was popularized by Andrei Rublyev. Prior to the 15th century halos were depicted more often as outlined circled of delicate gold. In this painting Saint George definitely has a strong halo that boldly contrasts with the red ochre background.

Saint George & the Dragon is a complex painting that evokes the spirit of the Russian Orthodox Church. It embraces its Byzantine origins but includes Russian energy so special to that northern country. The painting is no longer carried in a dimly lit church, but now hangs in the brightly lit State Russian Museum of Saint Petersburg, Russia. This fabulous museum has the world’s largest collection of Russian fine arts and contains centuries of Russian culture beginning from the 12th century. Saint George & the Dragon may have been created by an unknown artist, but he or she was an artist of talent, spiritual zeal, and vibrancy. Saint George & the Dragon is not just merely a Russian icon, it is a symbol of eternal Russia.