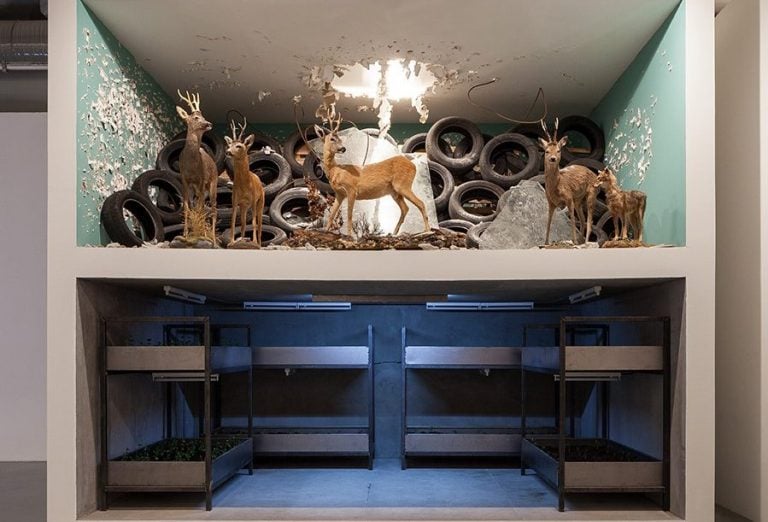 Why Political Actionism Is So Popular in Russia

The 2013 Revolution in Ukraine and the following traumatic events played a crucial role in the development of the country’s contemporary art. It induced the artists to appeal to the problems of national identity and sovereignty. Reflection on political and historical issues led to a surge of conceptual art through the genres of photography, installation, and performance. Discover Ukrainian political art!

In 2013, a revolution began in Ukraine, followed by the annexation of Crimea and the war in Donbas. This could not pass without leaving an impact on Ukrainian political art. At first, the crisis had a positive creative effect which manifested itself in the formation of the problem of identity. Later, this impulse tilted toward nationalism and led to decommunization. According to researchers, it could be destructive and lead to the erasure of historical memory.

Prior to the revolution, President Viktor Yanukovych refused to sign the Association Agreement with the EU. Protests began all over Ukraine as people who were frustrated with their country’s policy turned toward Russia. In the beginning the protests were mainly led by students. They expressed their discontent with peaceful marches and creative actions. Soon the authorities violently dispersed the youth from Maidan Nezalezhnosti Square in the center of Kyiv.

The betrayal of the government led to the state of preparedness of the art troop. The main square of the country turned into a communication platform for performers. Ivan Semesyuk described how the protesting artists spent their time on Maidan from morning to night, staging exhibitions and literary readings. Architect Dmitri Zhyla designed the Barbican pavilion, where these people could rest and bask. The pavilion first became an art residence for liberal artists. Then it turned into a fortification. There, along with the creation of posters, they mixed Molotov cocktails:

Art showed its teeth and proved that it’s not only about drawing pictures and making up slogans but also about burning cops, doing it beautifully, with an art subtex.

Quoted in Alexey Baturin, “When art showed its teeth. Ivan Semesyuk about the birth of the Mystetsky Barbican on the Maidan.“, Фокус, 02 March 2018.

Philosopher Viktor Malakhov wrote about the protests: “Maidan is a quite interesting sociocultural phenomenon – how unexpectedly and irreparably modernist revolutionism, postmodernist festivity, the harsh, blood-and-fire-smelling archaic of either the late Middle Ages or the eternal Civil War, and something else, some deep motif of standing for truth, are intertwined in it.”

The photographs did not simply reflect current events on Maidan, they aestheticized the protests. Boris Mikhailov created a series of photographs that, at first glance, might seem staged. Despite the exploratory nature of the pictures, they are not without aesthetics. We are able to notice the symbolic details and the colors. The artist himself called the protests a theatrical performance:

It wasn’t a war yet. At times it all looked a lot like some big theatrical action, and the barricades seemed like decorations. For me, the main mood of this series was the tension, the anxiety spilled in the air.

After the bloody events at the end of Maidan, the next strike on Ukraine was the annexation of Crimea and the war in Donbas. Acceptance and reinterpretation of recent and current events characterize Ukrainian political art from this time. One such example is the work of Nikita Kadan, The Possessed Can Witness in Court. It contains metal shelves with the artist’s works and objects from the collection of the National Museum of History of Ukraine. The installation is an archive, preserving the Soviet history of Crimea and Donbas. The objects are removed from their historical narrative and placed in a neutral zone. Thus, once symbolizing a particular ideology, they express nothing in this context.

The installation Shelter is a small square space consisting of two tiers. On the top, stuffed deer stand amid ruins of war, in front of barricades made of car tires. The deer refer to the Donetsk Local History Museum, destroyed during the conflict. The lower tier looks like a bomb shelter. There are two-story bunks filled with earth and celery sprouts from it. Kadan uses familiar images to speak of the indomitability of war and the incipient hope.

Alevtina Kakhidze’s installation-reminiscence Stories of Polunitsa Andriivnya, or Zhdanivka eloquently recounts the difficult period for Ukraine from 2014 to 2018 from the perspective of one family. The collected items are drawings, propaganda newspaper pieces, and recordings of phone conversations between the artist and her mother who lived in the separatist-occupied Donetsk region.

Maria Kulikovska protested the annexation of Crimea in her performance 254. Action in Russia. The artist wrapped herself in a Ukrainian flag and lay down on the stairs of the Hermitage Museum in St. Petersburg. She links the annexation to the uncertainty of the local population and pressure from Russian propaganda:

Here [in Crimea] there has always been quite strong Russian propaganda. Ukraine’s presence in Crimea was not that significant. For example, we weren’t taught much Ukrainian in school. So the feeling that you’re not there and you’re not here, that Crimea is on its own, I guess, has always been there. And I think that the annexation was the result of this state of ‘in-between,’ of uncertainty, of turbulence.

Quoted in Alexandra Wagner, “Give a slap. Crimean artist – about life after the annexation.“, Radio Liberty, 16 March 2018.

As part of the performance Raft CrimeA, Kulikovska drifted along the Dnipro River. This was a metaphor for the vulnerability of Ukrainian citizens who have lost their homes due to the annexation. The artist interprets the orange life raft as a peninsula that seems to be attached but can come off at any moment. She is afraid that after what’s happened anyone can wake up and find themselves unwillingly in a foreign country with power and weapons. 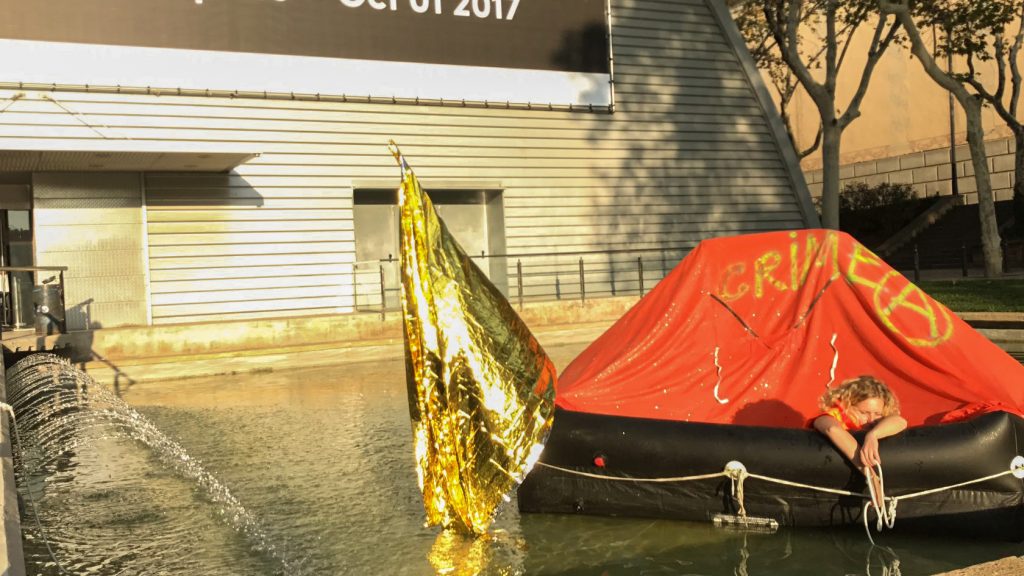 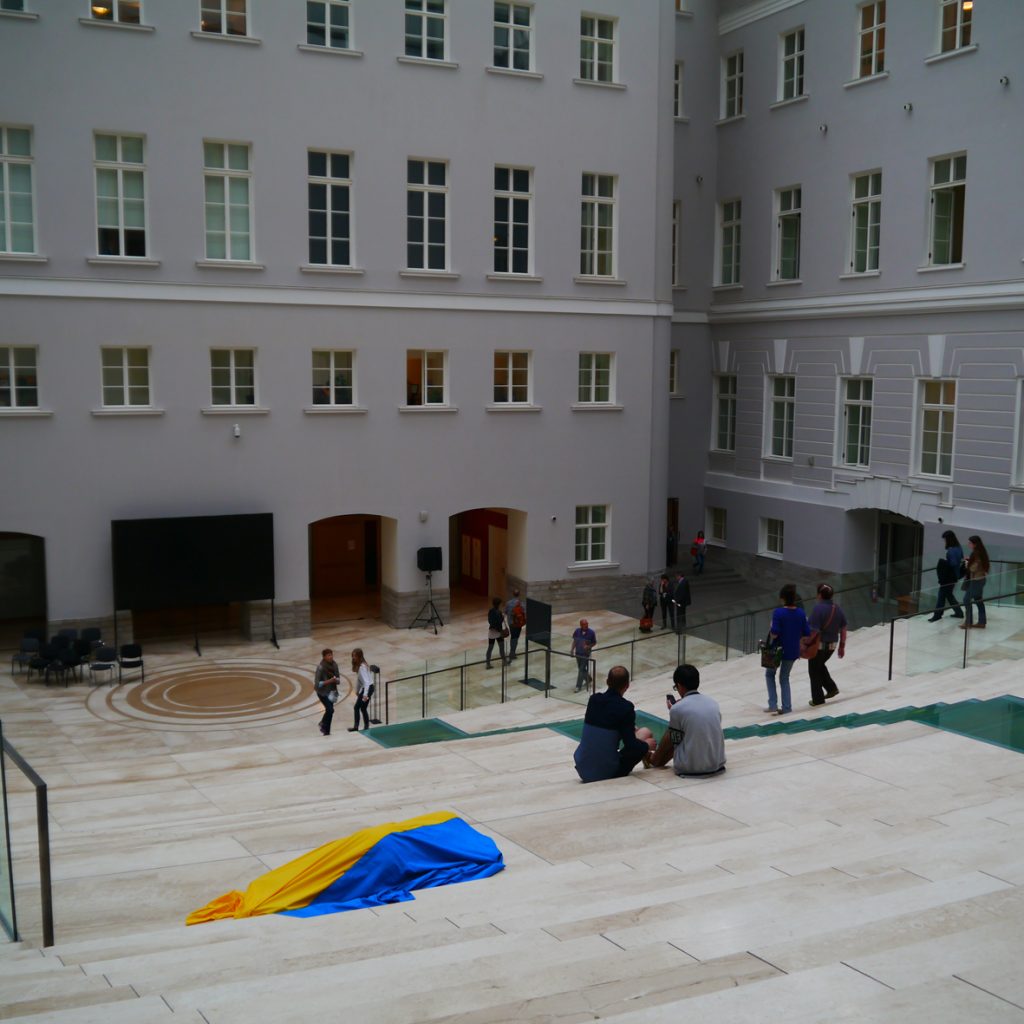 As part of the performance Raft CrimeA, Kulikovska drifted along the Dnipro River. This was a metaphor for the vulnerability of Ukrainian citizens who have lost their homes due to the annexation

Maria Kulikovska protested the annexation of Crimea in her performance 254. Action in Russia. The artist wrapped herself in a Ukrainian flag and lay down on the stairs of the Hermitage Museum in St. Petersburg.

Political struggle and art often interact fruitfully with each other. This is the case with Ukrainian political art. In the process of decommunization, the action Leninfall took place all across the country in 2015. Activists demolished over a 1000 Lenin statues and renamed Communist street names in more than 900 towns and villages, sometimes clashing with pro-Russian protesters.

Postcolonial art studies offer an analysis of the cultural legacy of colonialism. Soviet tradition didn’t consider the USSR a colonial empire, but this is a false assertion. This is why the vast majority of Russians took the news of Ukraine’s decommunization negatively. In addition, many Ukrainian scholars and human rights organizations condemned the government for erasing historical memory.

Destruction of monuments for political reasons occurs regularly, and more often it is associated with performance art rather than vandalism. In this case, it is a cultural-political gesture that implicates the collapse of a social-political system.

The most notable similar actions took place in the US and Britain during the Black Lives Matter protests and in South Africa involving the group Rhodes Must Fall. For BLM it was a powerful metaphor for resistance against historical figures for their contribution to the oppression of marginalized populations. The position of a minority, which regularly faces reminders of racism, now prevails over the conviction to preserve national memory.

The destruction of statues in post-apartheid South Africa began with the student movement. Students at the University of Cape Town dismantled the statue of Cecil Rhodes, the personification of everyday oppression and institutional racism. This performance symbolized the inevitable decline of privileged white supremacy.

On February 24, 2022, Putin began the invasion of Ukraine. National artists have not yet had time to react to what is happening. Two days before these events, Ukrainian-Russian artist Aljoscha staged an antiwar performance in Kyiv. The nude figure holds plastic forms against the background of the monumental Motherland Calls sculpture. This monument commemorates Russia’s role in World War II and is one of the few remaining symbols of communism in Ukraine. Aljoscha placed the performance documentation on his website and left the message:

Bioism [the movement in which the artist works] condemns any violence against humans, animals and plants. The suffering and war must be stopped!

Meanwhile Russian artists and activists protest as best they can. However, it is almost impossible to do anything useful under an authoritarian state. Artist Dmitry Vilensky describes the situation well:

Most people in the Russian contemporary art scene do not support the reactionary turn in Russian cultural politics and certainly do not support any military [action] and colonialism in Ukraine, but because of strict control of the public sphere, it is difficult to articulate your disagreement publicly, apart from posts on social media.

Quoted in Dorian Batycka, “Many in Russia Stand with Ukraine.”, The Art Newspaper, 22 Feb 2022.