House with Chimaeras: Facts and Legends About an Unusual Art Nouveau Building in Kyiv 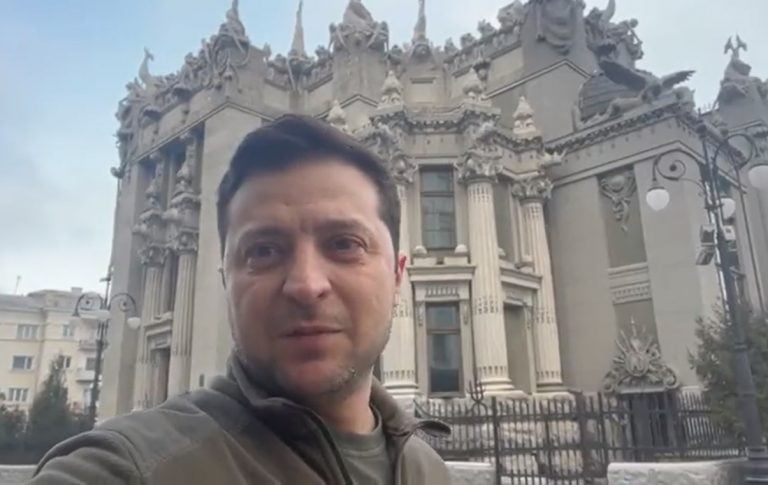 Ukrainian President Volodymyr Zelensky in his announcement standing in front of the House with Chimaeras by Horodecki in Kyiv, Ukraine. Posted on 26 February, 2022. Twitter.

House with Chimaeras (or Horodecki House) is one of the most extraordinary buildings in Ukraine from the Modernist era. Its asymmetrical structure is filled with concrete animals, birds, and fish. This is something which, despite its gloom, attracts many tourists.

The History of the Building

The famous Polish-Ukrainian architect Wladyslaw Horodecki (Владисла́в Городе́цький) built the House with Chimaeras and, given the complexity of the project, its construction was quick, starting in 1901 and finished in 1903.

In those days, the house was stunning not only in terms of its appearance but also through its use of innovative technologies. Its construction demanded unusual solutions, not least due to its location. The building is asymmetrical because it stands on a steep slope. It has three floors on Bankova Street side and six on Ivan Franko Square side. Also, it was built on concrete piles, and the finishing material was cement, something which had hardly been used before.

On the facade, you can see whatever you want, both four-legged and two-legged creatures – rhinos, frogs, elephants, lizards, deers, eagles, etc. Anything, but not chimaeras. A chimaera is a creature with the head of a lion, the body of a goat, and the tail of a dragon. And you will not find them there. All animals and underwater inhabitants depicted in the sculptures are real. Apparently, the name clung to the building because of its gloomy atmosphere.

The Italian master from Milan, Elio Salia, created the sculptures.

The house inside is even more impressive than outside. Each floor was considered to be a separate apartment. Each apartment had 8-10 rooms though this does not take into account another 2-3 rooms for servants. Although it was very expensive to rent it, rich people have always wanted to live in the House with Chimaeras. By the way, Horodecki was one of them. He and his family occupied a luxurious apartment on the third floor.

The theme of wildlife continued inside the house. High reliefs, stucco work, and sculptures decorate the ceilings, walls and stairs, all now preserved in their original form (although, of course, they have been restored). It is noteworthy that outside the building all the depicted creatures are alive, and those inside – dead. This is down to Horodetskyi himself. He was an avid hunter, and while others were not always pleased to see the carcasses and skulls of game, the architect himself enjoyed it.

An interesting fact. Horodecki was so obsessed with hunting that he planned a safari trip for years. This “pleasure” was not cheap, but the architect did not want to abandon his plan. So, in 1911, less than ten years after the construction of the House with Chimaeras ended Horodecki pledged it, and with the proceeds went hunting on a safari for six months. Upon his return, he described his adventures in the book In the Jungle of Africa, illustrating it himself. However, the architect had no money to disburse a loan, so he had to say goodbye to his architectural creation and sell the house.

However, the frescoes and furniture have not been preserved. During the Second World War, when there was no Horodecki or residents in the house, marauders looted it. Also, during the Soviet era in Ukraine, the building became an outpatient hospital. Soviet painters destroyed almost all frescoes. Now we have non-original wall paintings.

Legends of the House with Chimaeras

Rumors and legends, of course, are in the air of the unusual building with a gloomy atmosphere. It seems that people did everything to make the building even more mysterious. One of the most famous rumors – Horodecki built a “terrible house” as a sign of grief over the loss of his daughter, who drowned in the Dnipro River from unrequited love. Hence the motifs of the seabed in the interior of the house. However, the rumors turned out to be just rumors. The biographers of the architect found out that his daughter was alive and in a good health. In fact, she lived much longer than her father.

According to another legend, when Horodecki was evicted from the house, he cursed it such that none of the inhabitants would get along with the creatures of the house, except his own descendants.

Some people are also convinced that Horodecki built a house because he fought for a bet. Others claim that the architect erected a grand building for his mistress. Others are convinced that the real planner was not Horodecki at all.

How to Get Inside

Since 2005, the House with Chimaeras has been the Small Residence of the President of Ukraine. Here he has held negotiations and official meetings with high-ranking guests from other countries. So getting into the building is not so easy, but still possible. The Museum of Kyiv History offers tours of the building on Saturdays and Sundays for 200 hryvnias (around 6 euros). It takes 1 hour and goes only on the floor where Horodecki lived.

In order to enter, you must present your passport and leave your phone there as well. But you can take a regular camera with you and take pictures inside. Due to the pandemic, it is currently necessary to go inside in full quarantine equipment – a mask, gloves, and boot covers.

Update: On 24 February 2022, Russia launched a brutal invasion of Ukraine. As of today, Ukraine and especially the country’s capital, Kyiv is still under Russian attack. The mentioned House with Chimaeras by Horodecki made a famous appearance in President Volodymyr Zelensky’s announcement made to the Ukrainians to defend their land.

Below you can see a screenshot from a video posted by the president on Saturday morning, 26 February 2022 in the center of Kyiv.