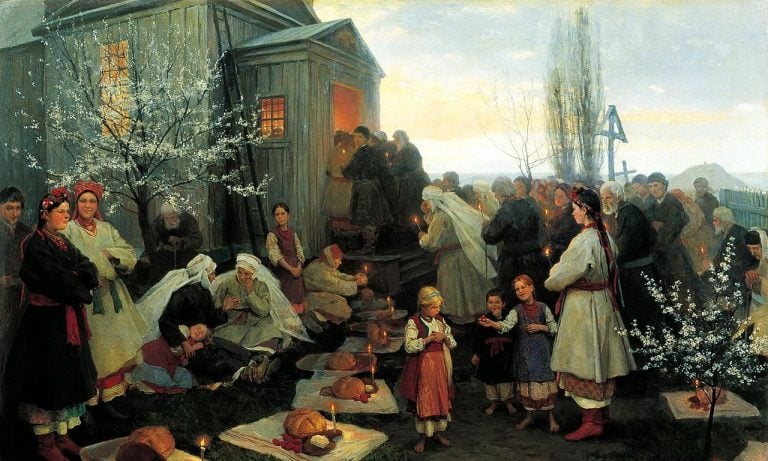 Mykola Pymonenko (1862-1912) was a Ukrainian Realist painter. He spent almost his entire life in Kyiv and dedicated his career to painting genre scenes. Truly, his works are a window into the life and culture of the Ukrainian people in the 19th century. His talent led him to meet other artists such as Ilya Repin and Kazimir Malevich. Today, he is considered one of the most important artists of his country. Even then, he gained widespread recognition both nationally and internationally.

Mykola Pymonenko as an Icon Painter

On March 9, 1862, Mykola Kornylovych Pymonenko was born in the village Priorka, Kyiv. At the time, that territory was part of the Russian Empire. For this reason, he is often cataloged as a Russian painter. Actually, he is not the only artist in this situation. Therefore, it is important to emphasize that he was Ukrainian.

He was the son of a woodcarver and an icon painter. Often, he accompanied his father who made altars and paintings for churches. Most probably, this contact with the country led him to decide on a career in genre paintings. Later, he began assisting at his workshop. And, in 1873, he entered the Kyiv Pechersk Lavra (Kyiv Monastery of the Caves) to study icon painting.

While his economic situation kept him from formal artistic education, his talent opened doors for him. Right away, in 1876, Mykola Murashko noticed his works. Truly, he must have been very impressed with what he saw. Indeed, he offered Pymonenko a place at his Drawing School in Kyiv. Luckily, he managed to waive his tuition. Quickly, he stood out as one of the best students.

Then, he briefly studied at the Russian Academy of Fine Arts in Saint Petersburg (1882–1884). Additionally, they allowed him to give classes to lower-secondary schools. Moreover, he received three silver medals for his accomplishments. Nevertheless, health problems and financial hardships forced him to go back to Kyiv.

Work as a Portraitist

During his career, Pymonenko made portraits of his family and close circle. 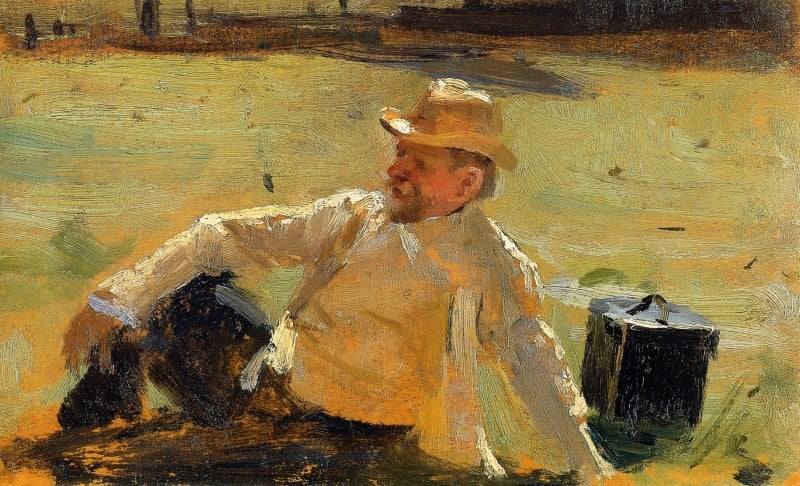 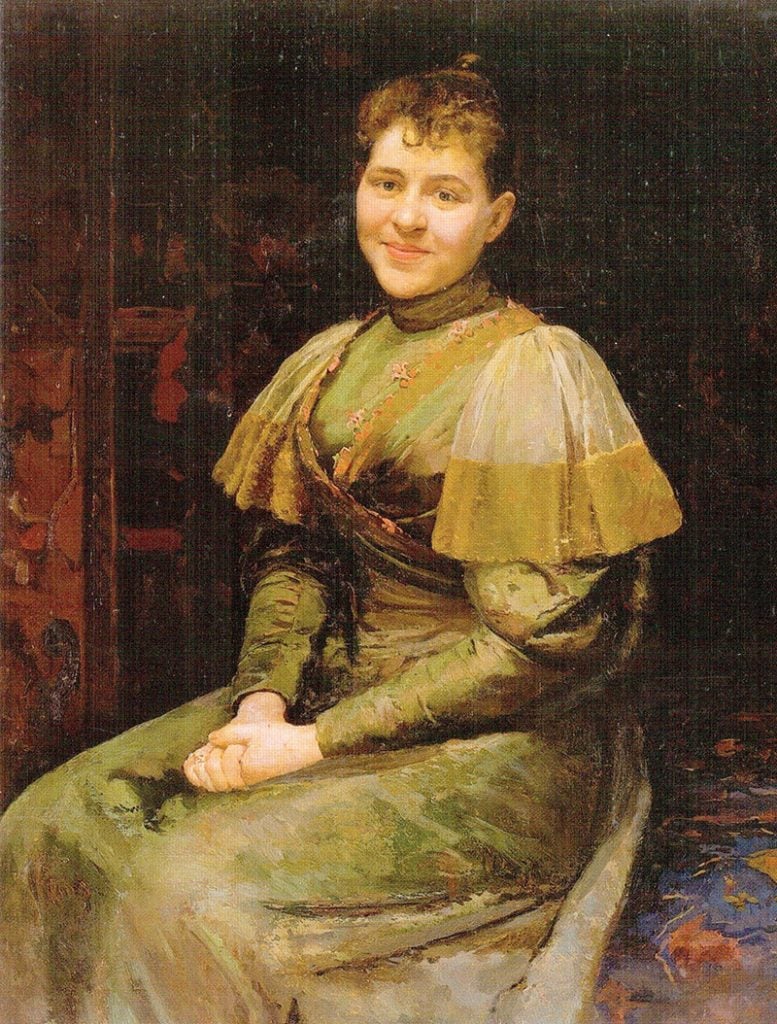 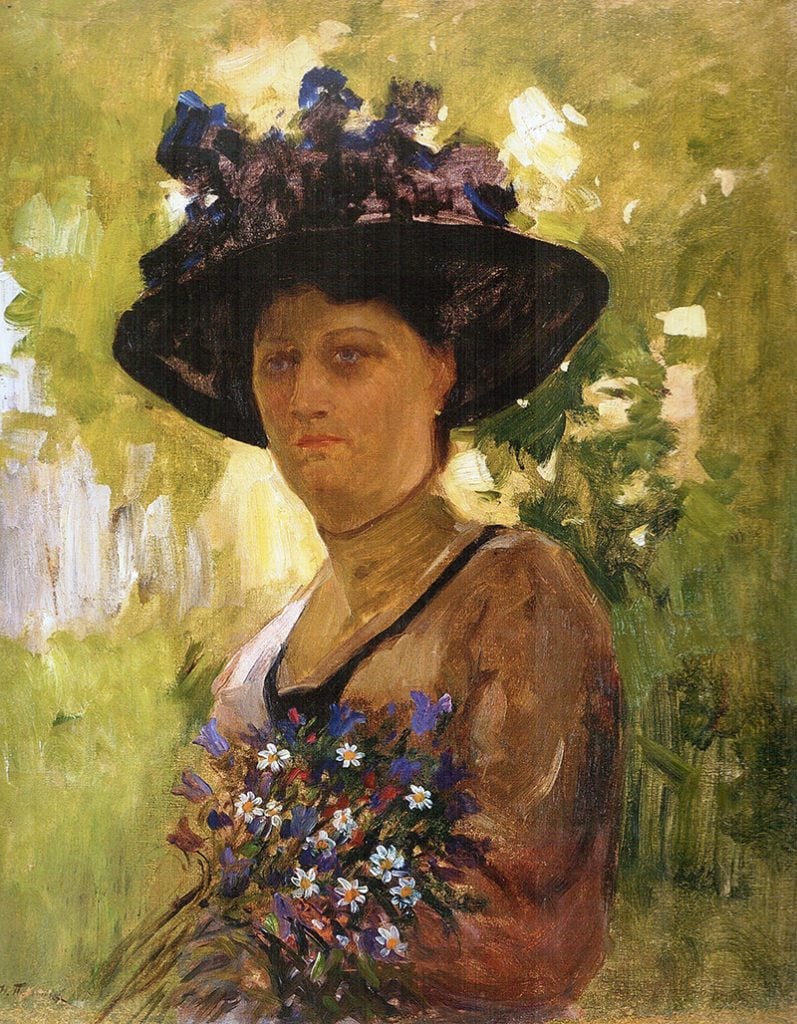 For example, Orlovsky was Pymonenko’s teacher at the Imperial Academy. And, they remained friends for the rest of his life.

Actually, her maiden name was Olexandra Orlovsky. Indeed, she was his teacher’s daughter. Soon after, she married Pymonenko.

Here, Pymonenko made studios of his kids, Mykola, Olga, and Raisa.

In here, there is the governess of his children.

His brother, Ivan, was the patron of Murashko’s Drawing School. Therefore, it was he who accepted to waive Pymonenko’s tuition.

Back at home, he returned to the Mykola Murashko Drawing School. This time, he was the teacher. Sadly, the school had to close after a few years. As a result, in 1901, he went to work at the Kyiv Polytechnic Institute and gave drawing classes to engineers. Simultaneously, he was one of the founders and teachers of the Kyiv Art School. However, he never abandoned painting. As a matter of fact, he was part of numerous groups and associations. For instance, he joined the Peredvizhniki (“Itinerants”) society at the invitation of Ilya Repin. Also, he joined the Society of South Russian Artists in Odessa. And, in 1904, he obtained the title of Academician by the Imperial Academy of Arts. 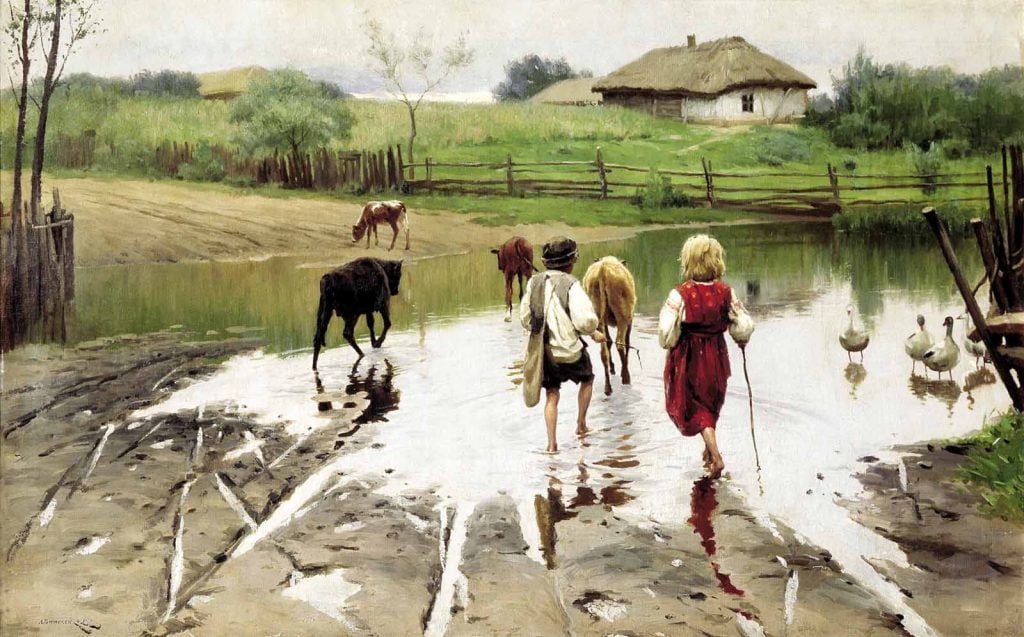 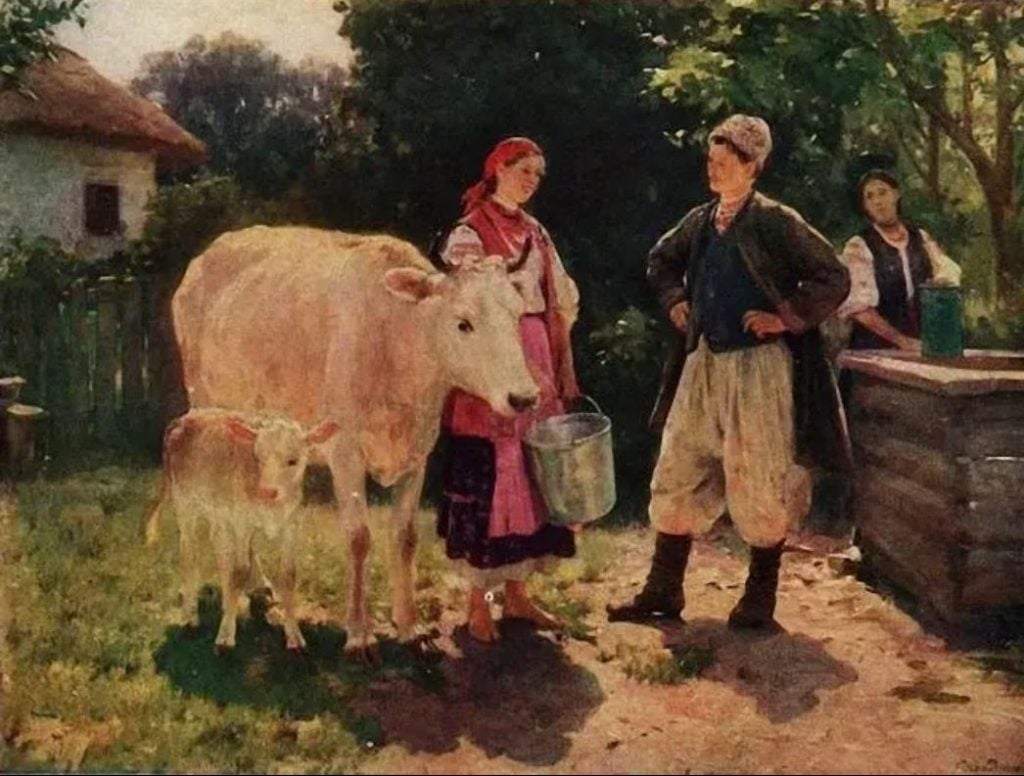 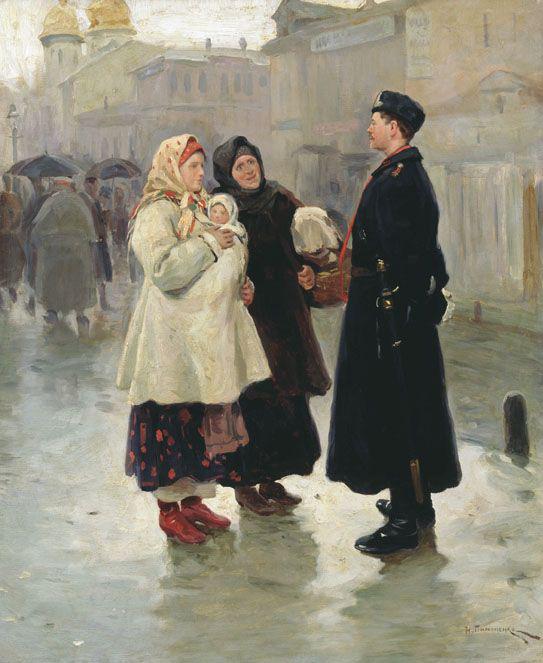 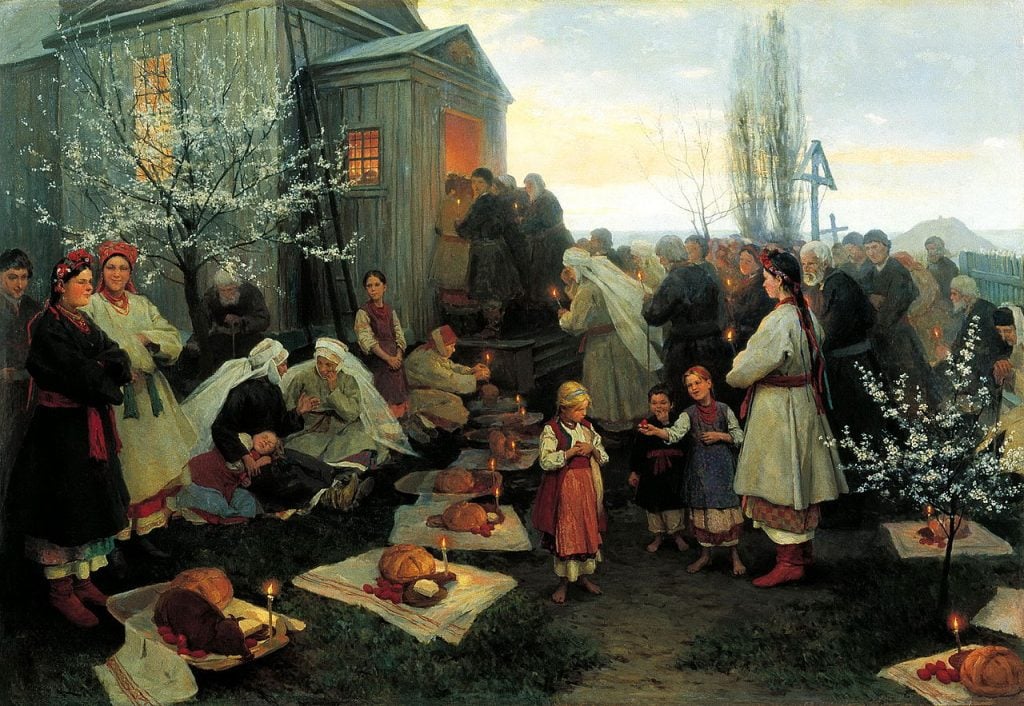 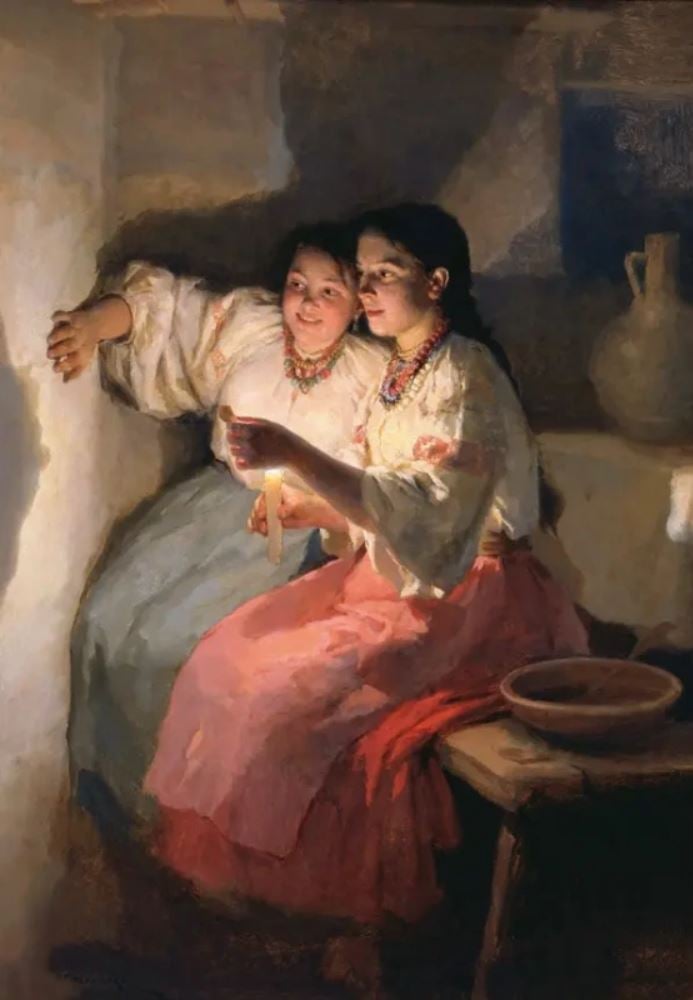 This group was born in Saint Petersburg. Above all, they rejected the constraints of the Imperial Academy. Later, it became the Association of Traveling Exhibitions.

Even though Pymonenko focused mainly on rural areas, he also did a few urban scenes.

The Easter Matins is a morning prayer sung early in the morning.

Divination is a pre-Christian tradition. Here, a couple of girls using wax and watching the shadows on the wall.

Meanwhile, Pymonenko also created historical paintings. For example, he focused on the Cossacks. In fact, this militia is still a national symbol for Ukrainians since the 15th century.

Added to it, he also depicted social problems. For example, the canvas Victim of Fanaticism illustrates a tragic moment in the town of Volyn in Kremenetz. Here, a young Jewish woman is cornered by an angry mob. Simply, her crime was being in a relationship with a Ukrainian man while refusing to abandon her faith. Interestingly, Pymonenko was Christian Orthodox. Nonetheless, the Jewish community accepted his work. Contrary to other works, this represented their struggles in the Russian Empire. In fact, having a critical stand was part of the Itinerants principles.

Later on, he participated in painting the interiors of the Volodymyr Cathedral. Certainly, it was a bit of a return to his beginnings as an icon painter, as well as his father’s profession. Specifically, he painted the images of Saint Anne and Nicholas of Myra. Additionally, he made some images on the pediment. Consequently, he received the Order of St. Anne III degree in 1897.

Western Recognition: The Salon of 1909

Besides, in 1909, he made it into one of the most prestigious exhibitions in Europe. Indeed, the Paris Salon accepted his painting Hopak, titled after a traditional Ukrainian folk dance. Furthermore, he received a gold medal from the Society of French Artists. In fact, the Louvre quickly acquired the canvas. Moreover, he exhibited in London, Berlin, and Rome. Equally important, he joined several organizations in those cities.

In fact, one of his students, Kazimir Malevich saw the painting during one of his visits to Pymonenko’s studio.

There were a great many easels with paintings depicting life in Ukraine.

Autobiography. Cited in Jean-Claude Marcadé’s Kyiv: The Capital of Modernity at the Turn of the Twentieth Century, 2019.

Pymonenko as a Teacher

Now, one of his most notable students was Malevich. Of course, he adopted a very different style. Nevertheless, there are a few paintings that clearly reveal Pymonenko’s influence. For instance, as Jean-Claude Marcadé notices, the poses of Floor Polishers are similar to those of Hopak. Likewise, he depicted peasants. Aside from him, he taught many of the later avant-garde painters such as Sergei Kostenko, Olexander Murashko, and even Lesya Ukrainian.

The Legacy of Mykola Pymonenko

Unfortunately, his health problems continued, and in 1912, Pymonenko died and was buried in the Lukyanivka Cemetery. Although his life was short, the legacy he left was huge. Aside from his paintings, there are illustrations for Taras Shevchenko’s poems. Moreover, the year after his death, the Academy of Arts organized an exhibition. There were hundreds of his works, from oil paintings to sketches and drawings.

Finally, in 2012, the National Art Museum of Ukraine commemorated the 150th anniversary of his birth with an exhibition and there is the Pymonenko Museum in Malyutyanka, Kyiv.

Pymonenko is dead. What a loss for the Itinerants! He was a true Ukrainian; will not be forgotten by the country for his truthful and lovely, like Ukraine, paintings, (…)

Kotlyar, Eugeny, “Painting “Victim of Fanaticism” by Mykola Pymonenko in the Context of Jewish Art and the “Jewish Question” in the Russian Empire”, Judaica Ukrainica 2 (2013): 126–141. Accessed on 8 March 2022.

“Pimonenko Mikola Kornilievich. On the 150th anniversary of his birth”. The National Technical University of Ukraine. Accessed on 6 March 2022.

The 2013 Revolution in Ukraine and the following traumatic events played a crucial role in the development of the country’s contemporary art.

Fedir Krychevsky lovingly recorded the culture of his homeland and was one of the most influential Modernist Ukrainian painters.