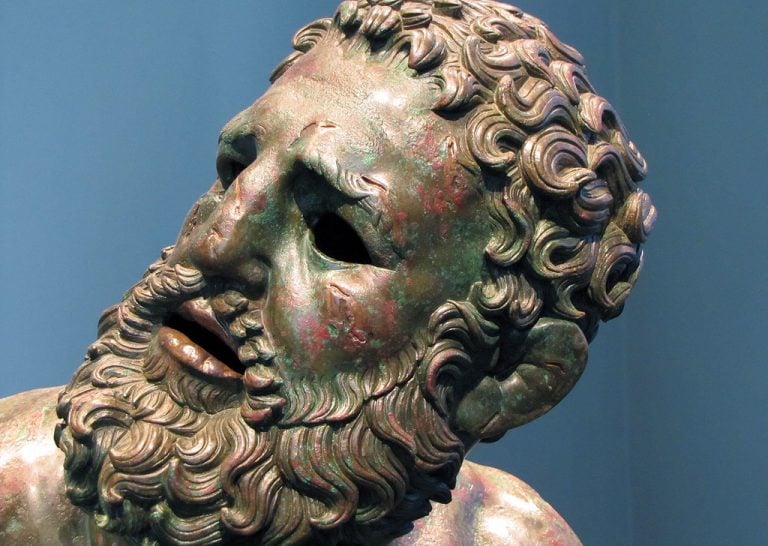 Coming face-to-face with a piece of art you’ve loved for years is a thrilling, exciting and oftentimes overwhelming experience. Such was the case for me on my trip to Rome, when I visited the Palazzo Massimo alle Terme branch of the Museo Nazionale Romano and saw the sculpture of the Boxer at Rest (Pugile in Riposo) for the first time.

Breathtaking and heart-wrenching to look at, his sad, magnetic presence and powerful physicality fill the room, which houses only one other statue. Battered and beaten, with his wearily turned head, his palpable exhaustion and vivid musculature engulf you in his realism. The missing eyes and open mouth expose the hollow inside of the sculpture adding to the pain and pathos that pour from the figure.
Hellenistic in style, with realism and raw emotionality, the Ancient Greek bronze made in the lost-wax method, measures 140cm. The exact date of creation (estimates range from 330-50 BCE) and artist are unknown. Surviving bronzes are rare; it was an expensive material and easy to melt down and reuse. The Boxer at Rest was discovered by Rodolfo Lanciani in 1885 on the Quirinal Hill at the Baths of Constantine. The careful way in which it was buried suggested it was hidden from invaders. Also indicating the statue’s importance was the wear that appears on his hands and feet, most likely from being touched repeatedly.
Classical Greek works focused on idealized figures and youthful bodies. The Boxer at Rest is a haunting portrayal of a defeated, worn and battered athlete. The obvious vulnerability and pain are immediately recognizable – evoking sympathy and compassion from the viewer. Nude, apart from his athletic suspenders (kynodèsme) and leather hand wraps (caestus), the vulnerability is compounded by the extreme hunching of his back, genital mutilation that adds to the self-control, broken nose, mouth breathing and swollen, busted cauliflower ear. Boxing in ancient times focused on blows to the face and head. He is covered with bruises and deep cuts, bright red and dripping, done with inlaid copper.
The Boxer at Rest is an incredible example of art’s ability to connect and convey humanity. Exhibiting aching weakness despite his massiveness, almost barbaric and beast-like, he is still poignant and tender. Despite the thousands of years since his creation, there still exists this immediate connection – timeless and uniting.