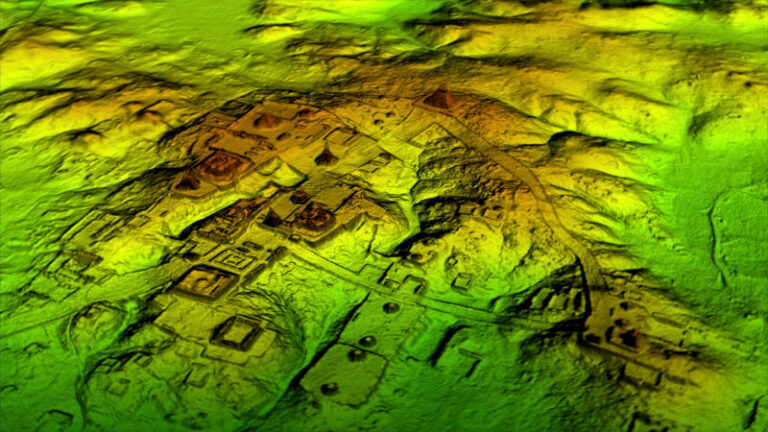 The Allure of Ruins — Architectural Decay in Art

The Ruins of Hampi in India

Lost civilizations and their remains now lie behind a simple scan. Read about Lidar, the technology that sweeps our faces and roads, our planet’s hidden treasures, and the farthest skies!

The acronym ‘Lidar’ stands for light detection and ranging, or laser imaging, detection and ranging. In simple terms, it is a combination of laser scanning and 3-D rendering. This innovative system feeds back to researchers accurate images of all sorts of things. For example, you know when you receive a push-note from your favorite game and want to go crush more candies? When you stare at the screen and your device unlocks, that’s because it silently scanned your face (maybe judging your look, too) and granted you access. That’s Lidar. Since we don’t advertise smartphones here at DailyArt Magazine, we would like to tell you about how the system revolutionized archeology! Just imagine a camera scanning the face of our planet, unlocking secrets and granting humanity access to its lost content.

How Does It Work?

By targeting a geographical area with Lidar, archeologists can determine the exact location and shape of concealed remains. Things buried in dirt, resting under layers and layers of sand or jungle vegetation, are mapped with a precision that was simply impossible before. By measuring the time taken for the laser beam to travel between two sensors and a target (time of flight/ ToF), we can render in 3-D whole sections of inaccessible ground, searching for archeological sites and micro-topography. In the diagram below, you can see how the time of flight is measured. On the left, the grey rectangular objects represent the ToF sensors, the yellow bands showing the laser beam, and the target on the right being the designated object.

Since 1961, shortly after the invention of the laser, man has found many applications for this new technology. It has been used by archeologists, astronauts, astronomers, agricultural researchers, biologists, just to name a few. Indeed, this was a versatile breakthrough.

Taking you for a quick trip around the world, looking at some of the most important findings, we stop first in Canada and its Fort Beauséjour. Here Lidar detected features of an old structure, dated 1755. Traveling through South America we admire a multitude of findings. Between Caracol in Belize, La Mosquitia region in Honduras, the Mexican site of Michoacán de Ocampo, and the 21,602 km² area called Maya Biosphere Reserve in Guatemala, in the past ten years archeologists have uncovered way more than they expected about the Mayan civilization.

Recently, Lidar was used by the National Trust to scan the Wellington Estate of Northumberland, UK. About 120 archeological sites dating as far back as 2000 BCE were consequently discovered. Considering that they were looking for a spot to dig 75,000 holes to replant native trees, they probably found more than they bargained for!

They should totally be using this technology in Rome, Italy, my hometown. Underground’s Line C has been under construction for years now. Unsurprisingly, whenever they move a sanpietrino (typical Roman super slippery paving stone), they find the next lost market of  Caesar, Brutus and Cassius. Boy, they would be saving millions if they did!

What Would Indiana Jones Say?

Yes, what would he have to say about this, beside his iconic “It belongs in a museum!” line? Once upon a time, discovering traces of bygone cultures was probably a matter of great instinct and sheer luck, preceded by a huge amount of study and perilous journeys through jungles and deserts. Tracking down previous findings, men and women of the past embarked on expeditions to bring back to light mankind’s hidden vestiges at all latitudes and longitudes. Although the excitement for technological advancements is contagious, and it’s mammoth potential has helped achieve so much already, allow me to be sentimental for a moment.

Mind you, this lingering melancholia about the loss of a romantic dimension might be due to my overexposure to books and movies. You could probably tell from the fact that I brought into this argument a hot, fictional archeologist’s point of view…

Despite my mental ruminations, it is undeniable that the aid of technology makes searching our world’s deepest trenches an effective and successful process. Machines help us unravel secrets of ancestral settlements with a depth unknown before to the archeological community. Lidar is revealing Earth’s secret silhouettes, shaped and reshaped by human hands for millennia at an unprecedented speed. With all due respect to Indiana Jones and his dauntless adventures, these are exciting times to be alive!

Are you an artist looking for a way to showcase your creations? REA! ARTE just published an open call for artists to take part in their 2nd edition...