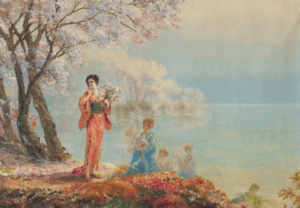 When tracing Japanese art stories in Europe, we found out about this exquisite female painter. Kiyohara Tama or Otama (later known as Eleonora Ragusa) was a woman so brave to leave the homeland for her husband and so ambitious to found a Japanese art school in Sicily.

After centuries of closure, Japan opened to foreign influence and trade in 1853. In his efforts to catch up with the global developments in technology, military, agriculture, and science, Emperor Meiji, or Meiji the Great, invited European scientists and experts to Japan. In the invited group, there were also three Italian artists who received a task to found an art school that would train young artists who would later equate Japanese art to European modern styles. Quickly did the new Kobu Bijutsu Gekko school in Tokyo open its doors to students trained in painting by Antonio Fontanesi, sculpture by Vincenzo Ragusa, and architecture by Vincenzo Cappelletti.

Vincenzo Ragusa, who originated from Palermo, met Tama in a garden where she was painting fans. He fell for her straight away and asked her to pose for a sculpture. Despite an age difference of 20 years, they quickly became lovers.

Tama was a real pioneer. She was the first Japanese woman in history who married a European artist. She was also a skilled painter with enough courage to paint differently. Aged 21, she left her beloved Japan to follow her husband to Sicily, thankfully together with her sister and brother-in-law. They moved into a house in Palermo, where Otama lived until 1933.

She changed her name to Eleonora Ragusa and set off on a new exciting project: to found a school of Japanese art in Sicily where she would teach lacquer, painting, and weaving. Unfortunately, after a couple of years, the school had to close due to financial problems and complicated Italian bureaucracy.

“When arrived to Palermo, Otama found herself facing the entirety of Italian art. Her painting was instead variable and eclectic, ahead of its times since she chose to use techniques which did not yet exist in Japan. Let’s take The Night of the Feast of Ascension (Notte dell’ascensione): although all contemporary painters had depicted Mount Pellegrino, she was the first one to do it as a nocturnal scene. She showed the mount from above with a nebulous sky and lanterns which nobody had ever painted before, since the electric lamp posts were a complete novelty for Palermo and other Italian cities. Only the Futurists would have focused on them some time after that.”

Kiyohara Tama undoubtedly brought innovation to the hermetic Italian art world which had been fearing that art from the Far East would contaminate its pure artistic expression. Instead, it enriched it.

Tama’s husband died in 1927 but she remained in Palermo. Not long after her husband’s death, her extraordinary story was unearthed by two Japanese magazines which started writing a cover story on her life. Her Japanese relatives sent for her in Europe and, in 1933, she returned to Japan after 51 years away. Soon after, she opened a painting workshop in Shiba where she taught Italian art and culture until her death in 1937.