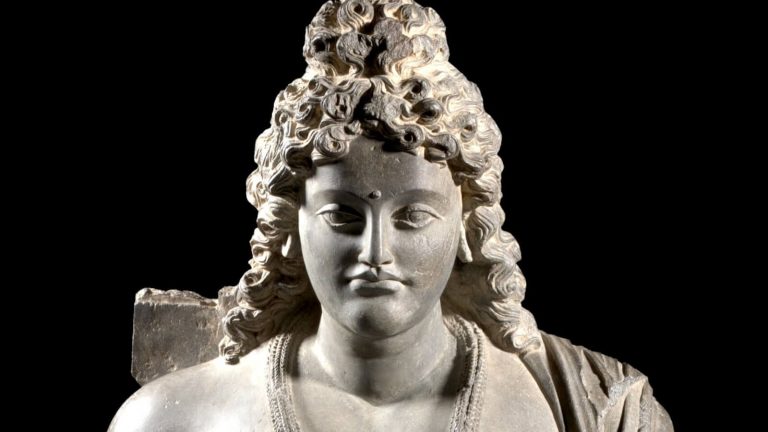 Journey to the East – Buddhist Art Across Cultures

Gandhara was a region located in the areas of modern North-West Pakistan and North-East Afghanistan. It was under Greek control during the 4th century BCE when Greece was experiencing the late years of its Classical Age and the early years of its Hellenistic period. This fascinating Greek culture impacted Gandhara and still influenced it 700 years later during the Kushan Empire of the 3rd century CE. Gandhara was a trading post on the Silk Road that connected Eastern and Western cultures such as India and China with ancient Rome and Greece. Hence, Gandhara was a commercial and cultural crossroad that developed a distinctive style of Greco-Buddhist art. Standing Bodhisattva from the 3rd century CE is a great example of this cross-cultural Gandharan Eastern-Western style.

Standing Bodhisattva is a free-standing statue carved from a single block of gray schist which is a local Gandharan stone. This metamorphic rock statue measures 153 cm high, 51 cm wide, and 17 cm deep (5 ft ¼ in high, 1 ft 8 in wide, and 6 ⅝ in deep). The statue features a large figure standing on a plinth relief of five smaller figures flanked by two columns.

The largest figure is a bodhisattva, a compassionate Buddhist person who defers their own enlightenment to help others on Earth break their rebirth cycles. Bodhisattvas are almost comparable to saints within Christianity in that they fulfill an intermediary function between the devotee and a higher purpose. In Buddhism, the higher purpose is reaching enlightenment like the Buddha. Therefore, bodhisattvas act as a conduit bridge by straddling the material and spiritual worlds.

Standing Bodhisattva has thick shoulder-length hair that flows in leonine tresses. The hair is gathered in an ushnisha, or top knot, which indicates the bodhisattva’s wisdom. The urna, or mole, on his forehead also indicates and emphasizes his wisdom. Cementing the great holiness of the figure was the inclusion of a halo that framed the bodhisattva’s head. Sadly, only a small fragment of the halo remains, which is attached to the figure’s left shoulder. The remaining bulk of the halo is broken and lost.

The bodhisattva wears only two pieces of jewelry: a necklace and an armband. The necklace bears a floral motif suspended on a rope-like chain. The chain has an ancient Roman appearance, but the pendant is definitely South Asian. The necklace is a beautiful blend of the two cultures. However, the armband on the figure’s left upper arm is distinctly more Greco-Roman in design. A small figure with a sunburst halo is flanked by two lions. This figure may represent the Buddha but in a classical artistic language. The jewelry highlights the bodhisattva’s position between secular and spiritual wealth.

Different hand gestures signify different meanings within Buddhist art. The bodhisattva’s hands are sadly missing but, based upon contemporary surviving examples, it is believed the bodhisattva’s hands were in the abhaya mudra, which is a raised palm facing the viewer. The abhaya mudra is a teaching gesture signifying the figure can and wants to teach the viewer. It is a symbol of approachability and mentorship.

Standing Bodhisattva has beautiful drapery folds that gracefully shroud his body. The right shoulder and arm hold the drapery like a Roman toga as it cascades down his back and wraps luxuriously around his waist. Thick layers of fabric ripple down his thighs and legs. They tumble and descend into waves like a flowing river of water. This watery drapery is frequently described as the “wet drapery” technique. It clings to the body and reveals the body’s form and texture. The “wet drapery” technique is most famously found in ancient Greek sculptures, for example, the classical figures adorning the Parthenon and the Hellenistic figures of the Venus de Milo and the Winged Nike of Samothrace. Hence, the bodhisattva’s drapery reveals its  Greek origins.

Standing Bodhisattva is held aloft by a deeply carved plinth. A central figure is flanked by four figures and two columns and is the largest of the group as it is sitting but has the same visual height as the standing flanking figures. The different figural scale implies an hierarchical relationship in the proportions. Simply put, the largest figure is the most important. Since the largest central figure sits on a lotus flower and has an ushnisha or top knot, this person is definitely a holy figure.

The National Gallery of Australia states it is simply another bodhisattva. However, I strongly believe it is the Buddha at his first sermon at Sarnath. Hence, why the figure holds his left hand in the abhaya mudra now missing in the larger Standing Bodhisattva above. The four figures surrounding the Buddha are either converts or attendants listening to his sermon.

Corinthian columns frame the far left and right boundaries of the plinth. The overall composition of the plinth strongly suggests its legacy to Roman imperial art. The plinth firmly resembles surviving examples of ancient Roman reliefs. This classically inspired relief acts as a physical base, and it also acts as a narrative base to the religious context.

Standing Bodhisattva is a beautiful example of the Greco-Buddhist style frequently found in Gandharan art worldwide. Almost every major notable museum will have at least one example of this blended Eastern-Western style. The large bodhisattva has typical Greco-Roman features such as sharp brows, a straight forehead-to-nose profile, and a toga-like drapery. However, it has characteristic Pakistani features such as wavy leonine hair, an ushnisha (top knot), an urna (mole), and a mudra (hand gesture). Standing Bodhisattva is a great example of Gandharan art and its blended multicultural origins. Hellenistic influences blend with Pakistani origins. East meets West. Greece meets Pakistan. Unique art is born.