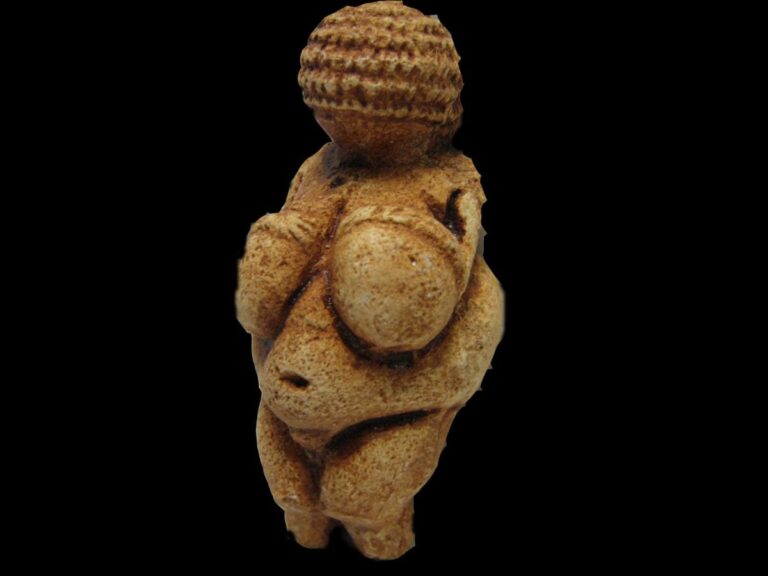 Venus of Willendorf, c. 24,000-22,000 BCE, limestone, once painted. Found in Willendorf, Austria and now at the Naturhistorisches Museum, Vienna, Austria.

Is Kylie Jenner the New Venus? Interview with the Artist Marco Battaglini

People are going crazy over these goddess gifs – 24 ancient female statues shaking what their mothers gave them. Artist Nina Paley created the gifs for one of her projects (you can see them here). They’re fun, clever, and a bit inappropriate, so it’s easy to see everybody likes them. But you might wonder about the real story of the goddess gifs. Where do these statues come from, and what do they really mean?

The answer is a bit complicated. First of all, Paley doesn’t list her sources for most of the images, and that made them difficult to track down. I found most of them eventually, but I still didn’t learn all that much. That’s because these statues are truly ancient! The oldest is around 25,000 years old. Even the younger ladies (except for one) are at least 3,000 years old. We simply don’t know that much about most of the cultures that created them, particularly because many didn’t yet have writing. Archaeologists often seem to have the superpower, but even they can only do so much.

Because of this, we can’t really determine why they were made or what purpose they served. We don’t know much about the society, religion, politics, or beliefs of the people who made and used them, so we have no context to fit them into. When we talk about these ladies being “goddesses” or “idols”, these are guesses at best. Based on their physical appearances, we can make strong hypotheses that some figures were involved in fertility rituals, or celebrate a voluptuous ideal beauty. We’re on the slightly stronger ground here, but we still don’t know what a fertility ritual would have meant to prehistoric people, or whether they had any concept of  “ideal beauty”. Sadly, we’ll probably never know what these compelling objects meant to the people who made and used them so many centuries ago. The real story of the goddess gifs might have to remain a mystery.

The Venus of Willendorf is the most famous of many “Prehistoric Venuses” found in archaeological excavations throughout Europe. In fact, these ladies are the earliest known representations of the human form. They fit in the palm of a hand, so they were probably personal items meant to be carried.

The name “Venus” was given to her by modern archaeologists, who assumed she has the same association as the Roman goddess of love and beauty. Obviously, prehistoric people would not have called her this. There’s no clear indication that she’s a goddess at all, though it’s certainly possible. Her prominent belly, breasts, and pubic area strongly indicate that she had something to do with fertility, but that’s sadly about all we know.

She doesn’t have a catchy nickname, but I think her exuberant pose makes up for it quite nicely. This figure turned up alongside two others, both with the same white skirt. One is a male with a bird face, and the other is a female whose head is now lost. Similar figures appearing on pottery makes scholars think this woman may have been a goddess, but she could also be a priestess. At any rate, her white skirt marks her as important, and her gesture may indicate that she’s performing a ritual.

Lots of these small, marble figures have cropped up in the Aegean islands called the Cyclades. They date between the Neolithic period and about 2000 BCE. Some have been found in tombs, suggesting that they played a role in funerary rituals. Unfortunately, we don’t know much. These figures became popular with 20th-century collectors, and this encouraged looting and forgery that has made it difficult for scholars to sort out fact from fiction. In addition to these standing females, similar figures depicting kneeling women, faces, or seated men playing the harp also exist – all in the same, highly-stylized aesthetic. You can see examples of the other types online at the Museum of Cycladic Art.

The Burney Relief / The Queen of the Night

In the case of this figure, the real story of the goddess gifs is a little more clear. Unlike many of her compatriots in the gif set, she is almost certainly an actual goddess. However, her identity is a little unclear. he might be Ishtar (aka Inanna), the Babylonian goddess of war and sex, Ereshkigal goddess of the underworld, or another Babylonian goddess. She’s the centerpiece of a large panel relief showing her with her menagerie. Her headdress, bird attributes, and animal sidekicks definitely mark her as a Babylonian deity. Many similar plaques have been found in ancient Babylon, but this one is particularly large. Some have suggested it may have been a shrine in a brothel. Ishtar was associated with prostitution, and that was apparently sacred in ancient Babylon.

I love this one! She definitely has the most personality of all the figures in the gif set. I also respect the fact that she manages to wear a great dress but still show off her assets at the same time. Snake-carrying women like her appear elsewhere in Minoan art, and she was found with a larger-but-similar sister. She is probably either a goddess or a priestess, but it’s difficult to be sure. Ancient Minoan culture as a whole is still a bit of a fascinating mystery to archaeologists. When feminist artist Judy Chicago created her famous installation The Dinner Party, she set a place for the Minoan Snake Goddess at her table of history’s most significant women.

This mischievous lady isn’t prehistoric at all! She’s located on a 12th-century church in England. She represents the Sheela na gig, an old folkloric character known for exposing her lady parts. Grotesques doing decidedly impious things like this are actually quite common on medieval church facades. Scholars think she might have a protective function.

Our prehistoric ancestors moved around a lot. It was a short and brutal life back then – you needed the protection and guidance of your gods and...