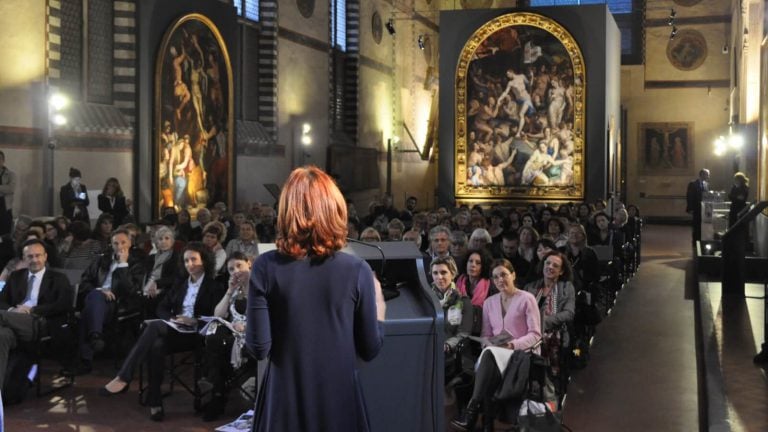 AWA Around the World for Women’s Day

Late last year, Advancing Women Artists (AWA) announced that its activities will come to an end in June 2021. For over a decade, this Florence, Italy-based organization has worked tirelessly to promote the appreciation and study of historical female artists. In its honor, we look back at AWA’s impact and accomplishments.

American-born art lover and philanthropist Jane Fortune (1942-2018) founded Advancing Women Artists in 2009. However, her mission really started several years prior. In 2005, Fortune encountered—and fell in love with—the artwork of Renaissance nun Plautilla Nelli (1524-1588). Discouraged by Nelli’s non-existent reputation and dismayed by the poor condition of her surviving paintings, Fortune advocated for Nelli’s rediscovery and the restoration of her works. AWA was born when Fortune expanded her mission to include other female artists in her adoptive hometown of Florence.

Advancing Women Artists is best known for its achievements in art restoration. The foundation identified more than 2,000 works by female artists languishing in museum storage throughout Florence. It enabled restoration for about 70 of them. The museum had to be Florentine, but the artist herself did not. The artist did not also have to be Renaissance or Baroque, though older, more vulnerable works tended to take priority over more recent ones.

AWA would raise money to fund a restoration under one important condition. The museum that owns the piece must commit to putting it on permanent display afterwards. Getting female artists back on view was Jane Fortune’s goal, and she originally hoped to found a special exhibition space for that purpose. Therefore, AWA would not restore a work destined to return to the basement. Florence’s many female conservators completed the majority of the treatments. Additionally, research conducted alongside these restorations has greatly enhanced the conversation about 16th-19th century female artists.

Education and public outreach have also factored greatly into Advancing Women Artists’s mission. The organization put female artists in the spotlight both within the art world and to wider public. Jane Fortune’s public television documentary on the subject, titled Invisible Women, even won her an Emmy award in 2013. You can watch the documentary here.

More recently, AWA collaborated with the Uffizi to host the Garzoni Challenge. Giovanna Garzoni (1600-1670) was an Italian still-life painter. Despite being high respected in her day, she had fallen into obscurity for centuries. The Garzoni Challenge tasked artists around the world to creating works, in any medium, inspired by Garzoni’s paintings. (They came up with some pretty creative stuff!) Meanwhile, Advancing Women Artists director Linda Falcone has been hosting Restoration Conversations for the past several months. In this series, produced in partnership with The Florentine, Falcone interviews female curators, conservators, and more about topics relating to female artists in Italy. Watch these popular and informative video segments on The Florentine‘s YouTube channel.

To wrap up, Advancing Women Artists is working on a large photo archive to document its legacy into the future.

Why is Advancing Women Artists closing up shop after so much success? According to an official statement, AWA feels that it has completed its mission to advocate for historical female artists. It’s easy to agree, as scholarship and public interest in this area are at exciting all-time highs. The difficulty in separating AWA’s initiatives from their ripple effects—numerous books, events, and exhibitions dedicated to these artists—is a testament to the foundation’s achievements. However, according to AWA director Linda Falcone, the success of its mission partially contributed to its end. Worldwide interest in female artists has simply exploded beyond AWA’s ability to keep up.

“Current trends in Florence and the world are moving towards the temporary exhibition of art by women via shows that strive to provide cultural perspectives and increase an understanding of these women’s oeuvre and identity. Where permanent exhibition is not deemed possible, shows of international scope provide immediate exposure and accessibility. Yet, for AWA to lead or follow in this direction implies large funds, extensive infrastructure and very specific expertise that go beyond the organization’s real possibilities.”

After avidly following AWA’s projects for the past several years, I am sad to hear that it is coming to an end. However, it’s difficult to feel too upset when I can see its deep and meaningful impact all around me. Scholars everywhere are rediscovering and studying women artists of all varieties like never before. People are starting to realize that significant female artists exist to a much greater extent than previously thought. It’s truly inspiring, and I have no doubt that Advancing Women Artists has played a key role in this movement.

AWA’s work has always taken a positive and celebratory tone, conveying the unshakable belief that these masterful women fully deserve to take their place in the annals of art history. AWA does not underplay the struggles historical female artists faced, but it never allows these challenges to overshadow the artworks and accomplishments. I’m so pleased to notice that this point of view is becoming more widespread. As a female art historian, I also appreciate AWA’s advocacy and support of women in all aspects of the art world. I feel honored to have participated in even a small way by covering AWA’s work here at DailyArt Magazine.

Thank you, Advancing Women Artists, and congratulations on all your achievements!