Restoration of “Last Supper” You Had No Idea Existed

Everybody knows Last Supper painted by Leonardo da Vinci hosted in the Milanese church Santa Maria delle Grazie. But does anyone know another painting treating the same theme painted by a woman artist in Florence around 50 years later? This is a story of a nun who taught herself to paint and of a restoration of "Last Supper", which is a star painting in the history of art produced by women. 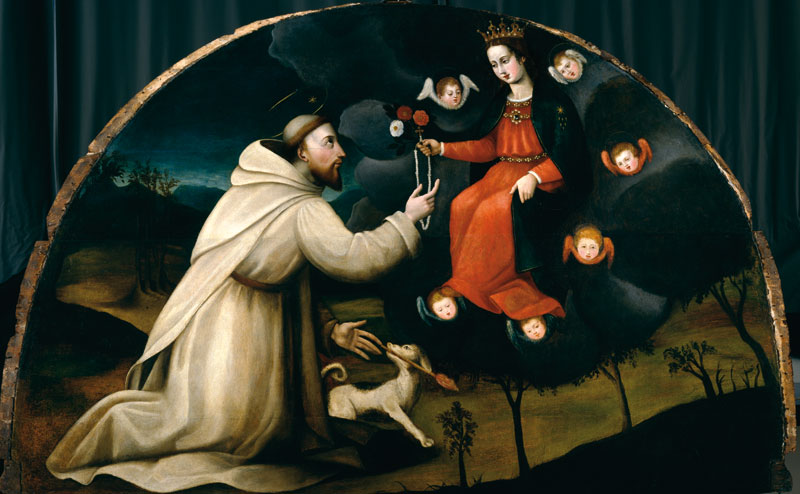 Plautilla Nelli, Saint Dominic Receives the Rosary, mid 16th cent., AWA Foundation[/caption] Born Pulisena Margherita Nelli, she was a daughter of a wealthy Florentine fabric merchant. She entered the Dominican convent at the age of fourteen and took a new name of Plautilla. Their convent was managed by a controversial preacher and friar Savonarola who promoted devotional painting and drawing by religious women to avoid sloth (he was fully against any secular painting, though). Thus, the convent became a hub for devotional art and many nuns took up painting. 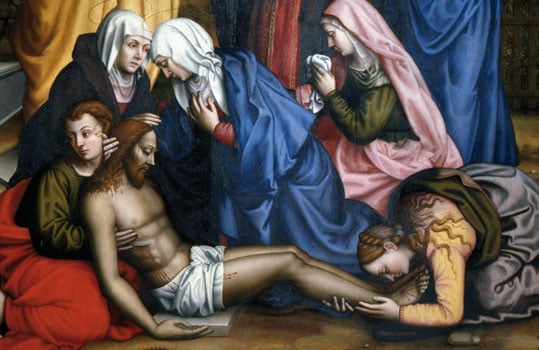 Plautilla Nelli, Lamentation with Christ, mid.16th cent., Musem of San Marco, Florence, AWA Foundation[/caption] Nelli began practising by copying mannierist works of Agnolo Bronzino and of Andrea del Sarto, yet she derived primary inspiration from Fra Bartolomeo whose 500 drawings she inherited. She was considered his artistic heir as she continued painting in his style expressing the artstic ideas preached by Savonarola. Her work is however a little bit different, as she infused her characters with more emotion. Moreover, many male figures seem to have feminine characteristics. It is because it was illegal for women to study nudes, but Nelli tackled the male anatomy probably by studying the corpses of deceased nuns...

Plautilla Nelli, Last Supper, Santa Maria Novella, Florence (not open to the public yet), restoration last supper[/caption] Florentine nobles believed her works to be holy and she is one of the few female artists mentioned in Vasari's "Lives of the Most Excellent Painters, Sculptors and Architects". Around ten years ago her work inspired the founders of Advancing Women Artists (AWA), a US-based non-profit organization which restores art by women in Florence, to celebrate her creative legacy by restoring one of her stunning large-scale (almost 7 m long) paintings. Not only did Nelli sign this work with her own name, but also she asked the viewers: 'Pray for the 'paintress'. 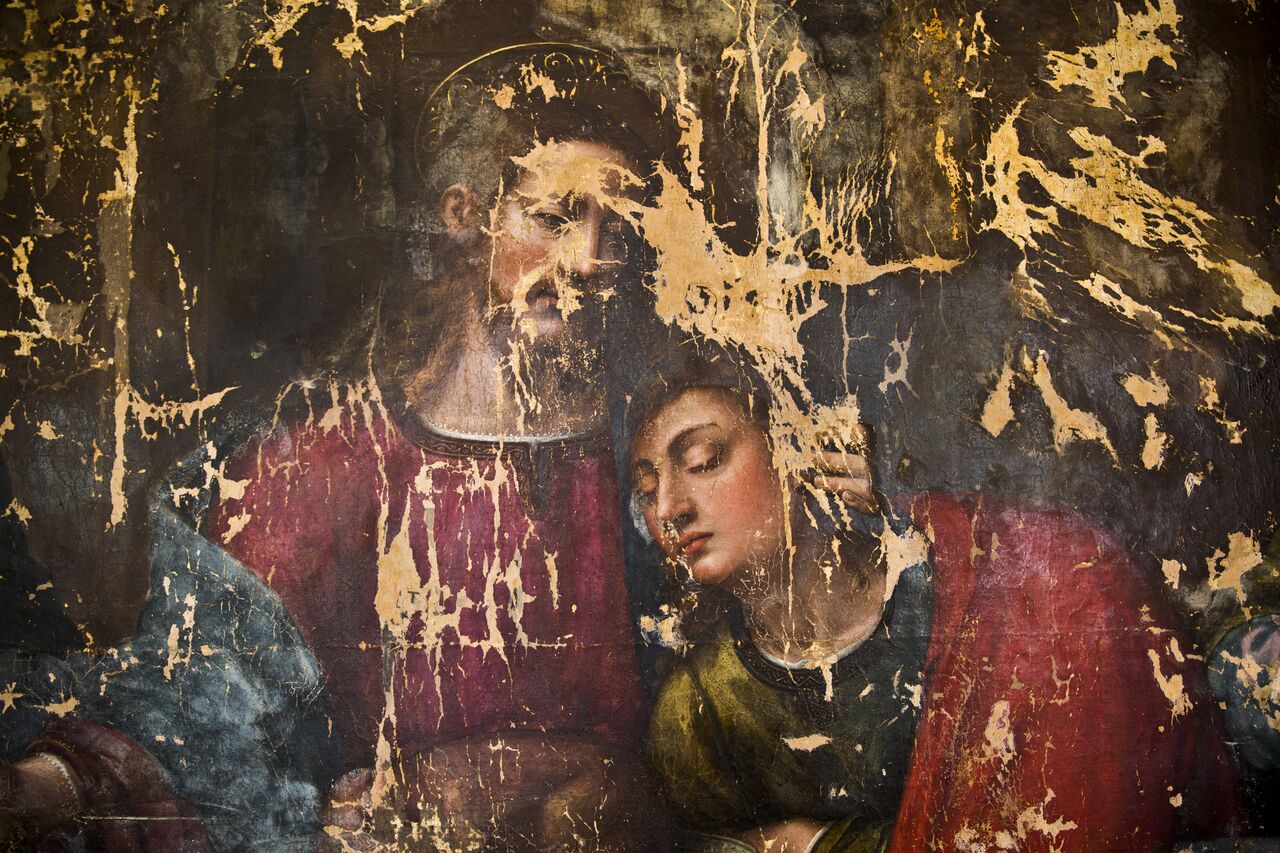 Adopt an Apostle. Detail of Christ and Saint John, phase I, Photo: Francesco Cacchiani[/caption] In 2015, AWA launched a project 'Adopt an Apostle' which is Phase II of 'TheFirstLast', a four-year restoration in collaboration with the Municipality of Florence. Its crowd-funding campaign recently completed had garnered $65,000 in on-line contributions from 410 donors in 19 countries, as individuals throughout the world could 'adopt' a figure in the painting ($10,000 per saint and $25,000 for the figure of Christ). The entire project should be completed by October 2019. Yet, Thomas, Simon and Philip are still seeking 'parents'... Moreover, not all the disciples' indentities are confirmed: Thomas, Judas and John are known for certain, but the rest still await rediscovery. Florence Mayor Dario Nardella has appealed to the generosity of the art lovers to give 'The Last Supper' new life, as he said: "Plautilla Nelli was the most important female painter of the Florentine Renaissance and her city will pay her homage by exhibiting this work in the Santa Maria Novella Museum Complex." Moreover, restoration helps the stunning detail to surface. One can now see the decorative borders on Jesus' collar and cuffs or even his eyelashes! [caption id="attachment_12928" align="aligncenter" width="1200"] 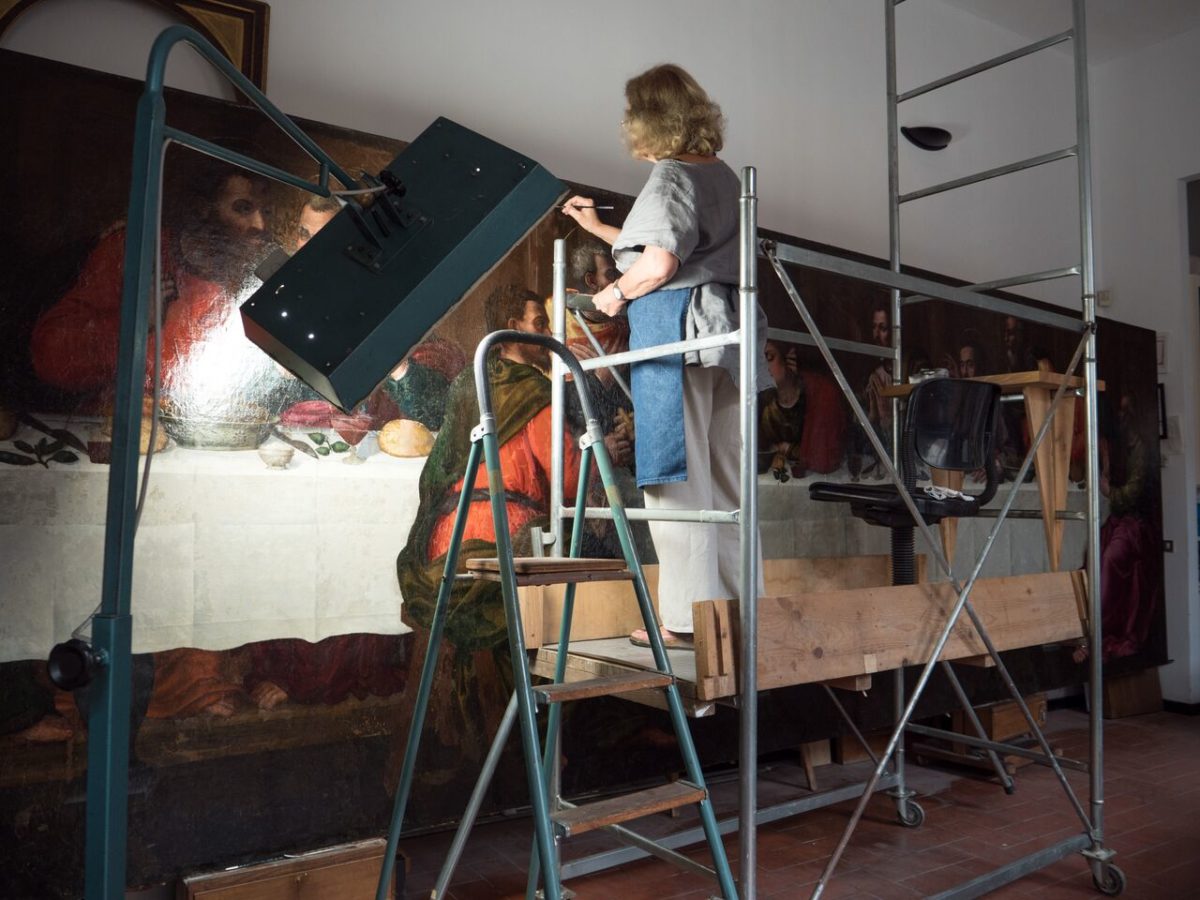 Conservator Rossella Lari on the scaffolding to restore Nelli's figures, Photo:Francesco Cacchiani[/caption]  If you want to learn more about this and other endevours of the AWA foundation, visit their website here.