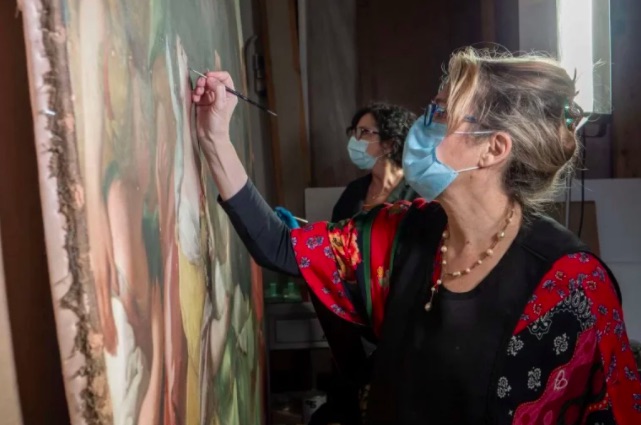 Violante Ferroni was a Florentine painter born in 1720. A young prodigy, she gained admittance to the Accademia del Disegno at the age of 16 and also belonged to Florence’s Accademia di San Luca. She had several important teachers, including another prominent female artist, Violante Siries Cerroti. We don’t know very much about Violante Ferroni’s life or career, because few records and works attributed to her are yet known. However, her paintings at San Giovanni di Dio alone prove her significance. The few professional female artists of her era typically specialized in small-scale works meant for domestic settings. The fact that Ferroni received a prestigious commission for large, religious paintings in a public setting indicates her great esteem in 18th-century Florence.

In the 16th century, Portuguese monk Saint John of God (San Giovanni di Dio) founded a healing order called the Brothers Hospitallers, whose members care for the poor and the sick. Canonized in 1690, he is now the patron saint of hospitals.

Ancestors of the explorer Amerigo Vespucci founded the hospital in Florence in the 14th century. In the mid-18th century, remodeling of the former Vespucci family home transformed it into the hospital building known today. Violante Ferroni was one of several artists chosen to decorate the hospital’s new atrium. San Giovanni di Dio operated as a hospital until 1982; it now belongs to the Tuscan health and wellness ministries and is also open as a museum.

San Giovanni di Dio cared for victims of the Black Death, and some of them even received preliminary treatment beneath the paintings. This fact certainly lends a relevance to the restoration that did not exist when work first began in 2019. Fittingly, AWA has named the project The Art of Healing, honoring the timeless connection between artwork and wellness.

Saint John of God Heals Plague Victims arrived at Elisabeth Wicks and Marina Vincenti’s Florence conservation studio in October 2019, after removal from its niche in the hospital. Saint John of God Gives Bread to the Poor followed some months afterwards. Over the past years, Wicks and Vincenti have carefully conserved the two paintings. This process has included studying their condition, repairing tears, re-adhering flaking paint, and filling in areas of lost paint. Photographs documenting the process testify to the great improvement caused by removing darkened varnish alone!

Also, conservator Marina Vincenti discovered Ferroni’s signature on Saint John of God Gives Bread to the Poor. This is an exciting find, since 18th-century artists did not sign their paintings with the regularity they do today. Wicks has also shared what she has learned about Ferroni’s painting technique, which is not always consistent between the two paintings. Since scholars currently know so little about Violante Ferroni, this opportunity to study her up close could prove valuable for placing this overlooked artist back into the art historical narrative.

Violante Ferroni’s San Giovanni di Dio paintings were fully conserved and ready for re-installation in 2021. Learn more about the restoration process in a video interview between AWA director Linda Falcone and conservator Elisabeth Wicks. The conversation was part of the Restoration Conversations video series, a collaboration between AWA and The Florentine.