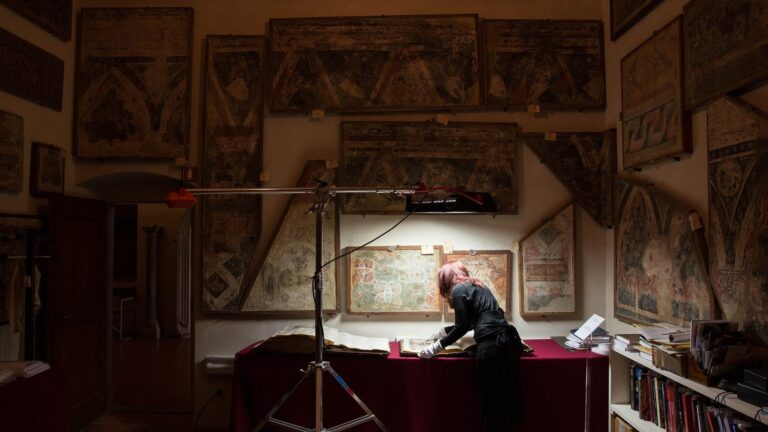 The Advancing Women Artists foundation (AWA) is a group that aims to restore female artists to the world. Founded by Jane Fortune after a trip to Florence, Italy, the foundation works to identify, restore, and display works by female artists that are currently in museum storage in Florence and the wider Tuscany area. The organization is made up pretty much entirely of women, and it employs female researchers and restorers.

According to its website, the Advancing Women Artists Foundation has a three-part approach to achieving its goals – research, restoration, and exhibition. First, artworks have to be identified in museum storage and then cataloged. Florentine museums sometimes partner with AWA to discover these forgotten works in their collections, since Florence has a particularly large number of works by pre-1900 female artists. Once pieces have been identified, research on the artwork and the artist helps build a strong case for the next two phases.

Next, restorers care for the piece in order to repair any damage it has suffered over the years. If you’re interested in the restoration process, AWA documents each restoration on video, so everyone can learn all about it. Restoration is time-consuming and expensive, so the foundation looks for donors, which it calls “Art Angels” to fund the process.

Finally, the foundation advocates for the exhibition of each restored work. Permanent exhibition is preferred, and restoration by AWA is often contingent upon the museum that owns the piece agreeing to put it on permanent display. The foundation also looks for independent exhibition spaces to show even more works.

Florence is best known for its Renaissance artists, and this tradition included a surprising number of women. It may come as a surprise to learn that many of these female artists were very successful and well-regarded in their own times, despite the many disadvantages they faced. They have only become forgotten more recently. Artist Plautilla Nelli was actually praised by the first art historian, Giorgio Vasari – a huge honor not given to just any artist. The AWA doesn’t only champion Renaissance women, however, or even only Florentine-born artists. It restores works by female artists of all eras, including some still living, who have worked in Florentine collections. The foundation also aims to support women in the field of art restoration and female museum directors and curators. In Florence, many art restorers are women, and the foundation hires female restorers in almost all cases.

The Advancing Women Artists Foundation made headlines in 2018 (including right here at DailyArt Magazine) for its restoration of a highly-significant, 21-foot Last Supper by 16th-century Italian nun Plautilla Nelli. Nelli was a talented, self-taught artist who was very successful in her time; more recently, she was the inspiration for AWA. She lived in a convent where she ran a studio and trained other female artists. Nelli’s Last Supper is both the largest known painting by an early female painter and the only known depiction of the Last Supper, a highly-significant Christian theme, by an early female artist. She was clearly a formidable artist. The foundation has already restored several of her other works.

Nelli’s Last Supper is massive. To fund the work, AWA has started the “Adopt an Apostle” program, asking patrons to sponsor the restoration needed on the figures of individual apostles. Nelli’s Last Supper was restored by the end of 2019 and is on permanent display in the Museum of Santa Maria Novella.

If you want to support the Advancing Women Artists Foundation, consider becoming an Art Angel by making a donation. In addition to completing the restoration of the Nelli Last Supper, AWA is also currently looking for funding to restore paintings by Dutch artist Maria van Oosterwyck, award-winning painter of cityscapes Antonietta Brandeis, and religions and portrait artist Anna Piattoli. The foundation is also trying to acquire permanent and temporary exhibition spaces to show more works than the current Florentine museum system can display.

Anna Bensted. “In Florence, they’re bringing the works of women artists out of the basement“. PRI.org via USA Today. December 26, 2017.