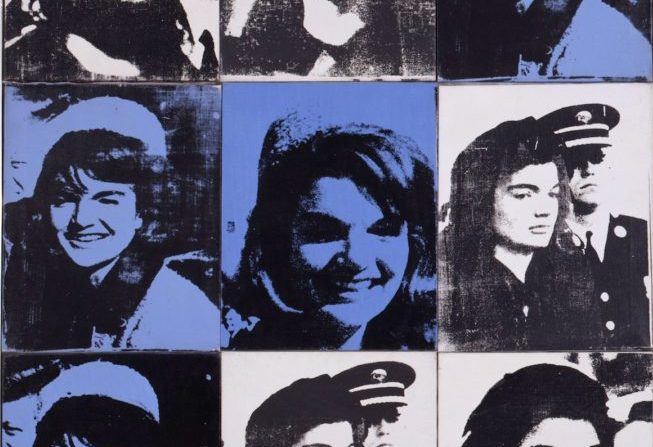 Read about the most famous (and controversial) series by Andy Warhol featuring the photographs of Jacqueline Bouvier Kennedy, the First Lady, who was the wife of John Fitzgerald Kennedy, the 35th president of the United States from 1961 to 1963.

The series dates to the weeks following the assassination of President John F. Kennedy in Dallas on November 22, 1963, and the beginnings of Warhol’s experiments with the screen-printing technique. Warhol, dazzled by the staggering amount of press coverage on the event, admitted:

What bothered me was the way television and radio were programming everybody to feel so sad. It seemed like no matter how hard you tried, you couldn’t get away from the thing.

The serial nature of the portraits, which amounts to 300 different pieces, is Warhol’s comment on the mechanisms of media, which  programs its audience to think and feel a certain way by bludgeoning them with a set of pictures and words. Commenting on the media and contemporary society by using the familiar and popular in a new way is one of the characteristics of Warhol’s work.

Warhol, hypnotized by the face of the First Lady, would collect the photographs of her from the press and print them on small canvases with blue- and gold-colored grounds. The colors are fundamental here as they refer to the centuries-old tradition of religious painting, with blue and gold being the most precious pigments and therefore used to highlight the importance, or sanctity, of a depicted figure. As Warhol’s close associate Bob Colacello concluded “Andy was making religious art for a secular culture,” and with his portraits of Marilyn Monroe and the film star Elizabeth Taylor, the “trilogy of saints – two Magdalens and a Holy Virgin – was complete.”

By the Holy Virgin, Colacello meant Jackie, a modern Madonna, who witnessed the death of her loved ones, suffered, but remained strong and revered by many.