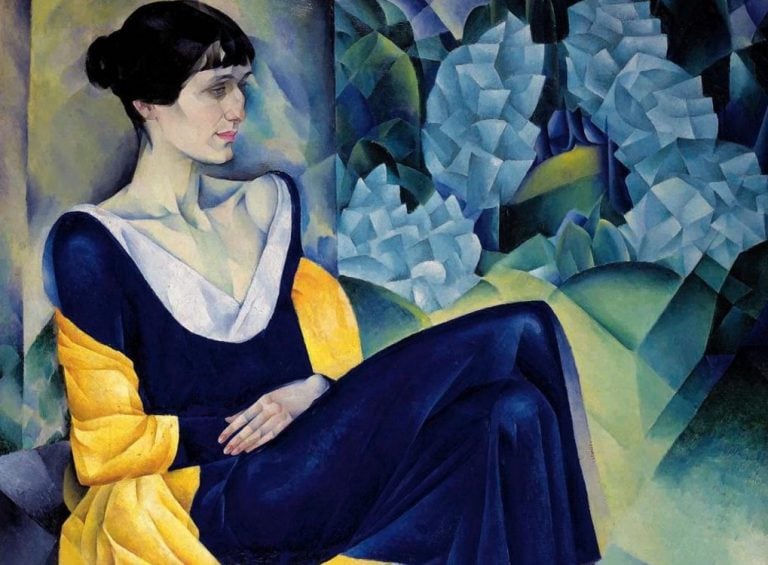 It is hard to say how many portraits of Russian poet Anna Akhmatova (1889-1966) exist – she was painted by many famous artists of the 20th century. She was an inspiration for many geniuses, being a genius poet herself.

Anna Akhmatova’s poems combine classical elegance and amazing passion associated with the drama of her own destiny. The poet began to create at a time when the very idea that a woman could be a poet was rather unusual.

All significant events of the 20th century became landmarks in the fate of Anna Akhmatova. She survived two world wars, the Russian Revolution and the Siege of Leningrad. What courage she needed when she was forbidden to publish, or when her son and third husband were in the forced labor camps! Certainly, Akhmatova became the voice of the people.

Anna Akhmatova’s genius did not fit into any framework. Her mysterious nature attracted many genius artists she met during her life. But Anna was very attentive to every image of her. She preferred to pose in profile both to artists and photographers. Let us show you the most famous examples of Akhmatova’s portraits!

Akhmatova met Modigliani in 1910 in Paris. She was there on a honeymoon with Russian poet Nikolai Gumilyov. Amedeo and Anna’s correspondence continued the following year. He wrote to her passionate letters but Anna never revealed their relationship, which remains a mystery until this day.

In her memoirs, the poet mentioned 16 drawings presented to her by Modigliani and brought to Russia. But, as Akhmatova herself said, only one of them survived, the rest died in the first years of the revolution. However, her stories about the drawings’ disappearance were always different. Later Modigliani’s heirs confirmed that several more of his sketches portraying the poet survived.

“I remember a few sentences from his letters. Here is one of them: Vous êtes en moi comme une hantise [You are like an obsession in me].”

Akhmatova painted by Olga Della-Vos-Lardovksaya is different and somehow idealized: there are no strains or complications. She was rarely painted in such a dreamy way. Later Zinaida Serebriakova would catch this mood once more.

Avant-garde painter Nathan Altman was struck by the poet’s appearance: the famous bangs, the unchanging shawl. Above all, he was amazed by Akhmatova’s magnificent ability to carry the burden of her sudden glory, which had already given this young woman, the same age as Altman, something regal. So, the artist created a portrait of a self-assured, modern woman.

The drawing by Russian avant-garde painter, Yury Annenkov is one of the most popular images of Anna Akhmatova. This particular portrait adorns most of her poetry collections, as well as books dedicated to her. Anennkov finished it in only one session. The painter and the poet met in 1913. After that, throughout Anennkov’s life, he idolized Akhmatova and admired her poems.

“Sadness was the most characteristic expression on Akhmatova’s face. Even when she smiled. And this enchanting sadness made her face especially beautiful. Every time I saw her, listened to her reading, or talked to her, I could not tear myself away from her face: her eyes, lips, all her harmony were also a symbol of poetry.”

Yury Annenkov, The Diary of my engagements, 1966. Litmir.

1922 was one of the most tragic years in Akhmatova’s life. Firstly, her first husband was executed, then her teacher, poet Alexander Blok, died. Furthermore, she separated from her second husband, Russian orientalist Vladimir Shileyko. The poet herself was not happy in this marriage and compared it to prison. In that difficult moment in life, Anna posed for Kuzma Petrov-Vodkin. Behind the back of the poet, we can see a muse, bowing her head in sorrow.

Zinaida Serebriakova, one of the first famous female artists in Russia, adored Akhmatova’s poetry. So, through Serebriakova’s eyes, Anna is full of light and is smiling softly. Just a few lines and contours, and a wonderful depiction of Akhmatova’s character appeared: she was a very open and kind person.

Anna of all the Russias

In 1946, the Communist Party of the Soviet Union called Akhmatova’s poetry unprincipled and ideologically harmful. As a result, some of her new books did not make it to print. So, after the devastating news, Anna Akhmatova was left completely alone. Some friends stopped communicating with her, and she avoided those who wanted to maintain a relationship, so as not to harm them. But, artist Martiros Saryan was not afraid to invite the disgraced poetess to pose in his Moscow studio.

Moisey Langleben painted one of the last portraits of Akhmatova (she died in 1966). Akhmatova left her autographs on four of the portraits (overall, Langleben created 5). It was certainly a sign that she liked the work. Somehow, on this portrait, she reminds us of great Russian queens – and she truly was one.

“To the golden-lipped Anne — to a word
That all of Russia redeems!
Carry away my voice
And my heavy sigh, wind.

About quiet bow of the earth among
Golden fields, O the burning skies,
Tell the story; and also about
From the agony blackened eyes.

You attained once again
In the thundering height!
You — the nameless one!
Carry love of mine
To the gold-lipped Anne —
All of Russia!”