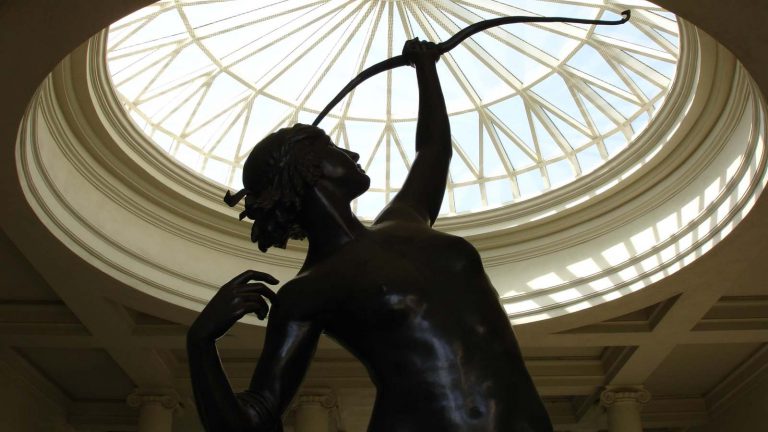 The Fabulous Sculpture and Mysterious Life of Edmonia Lewis

A pioneering female sculptor of the 20th century, Anna Hyatt Huntington created artworks that are still visible all over New York City. Here are some of her most famous sculptures.

Anna Hyatt Huntington (1876-1973) was born Anna Vaughn Hyatt near Boston. Her grandmothers, mother Audella, and older sister Harriet helped her fall in love with art. In fact, she initially took up sculpture in order to follow Harriet, with whom she sometimes collaborated.

While her female relatives inspired her career, her father influenced her subject matter. Alpheus Hyatt was a zoologist and paleontologist, so it is little wonder that Anna chose to specialize in animal sculpture. She seems to have enjoyed a close connection to and understanding of animals, both of which shine through in her art.

Huntington started her career by making small-scale animal figurines. She was successful in this popular genre, selling hundreds of copies of some creations. She received between $25 and $335 for even the more modest versions. This was especially true once she moved to New York in 1902 or 1903. Although Anna Hyatt Huntington made her reputation through small works, she didn’t stop there. She soon graduated to large-scale public sculpture projects.

In 1915, Huntington received a monumental commission for Riverside Park in New York City – an equestrian statue of the medieval French heroine Joan of Arc (c.1412-1431).

Huntington had first planned Joan of Arc while in Paris in 1910. While the huge horse kept with her specialty of animal sculpture, the work overall represented a significant departure in scale and subject matter. Horses, in general, and equestrian statues particularly would thereafter feature prominently in her career. She exhibited a version of Joan of Arc at the 1910 Paris Salon, where it won an award and attracted the attention of the Riverside Park committee.

Huntington’s Joan of Arc claims two significant distinctions. First of all, it made Huntington the first woman to ever receive a public art commission in Manhattan. The statue was also the first in the city to honor a historical, rather than fictional or allegorical, woman. It still stands today at West 93rd Street and Riverside Drive. There are also copies at the Legion of Honor Museum in San Francisco and elsewhere. Meanwhile, Huntington made a very different Joan of Arc monument – this one carved out of marble in a much more reflective posture – for the Cathedral of Saint John the Divine in Manhattan.

Diana of the Chase

In 1922, Anna Hyatt Huntington became a full member of the National Academy of Design. For the occasion, she donated to the academy’s collection an almost 100-inch-high bronze sculpture of Diana. The Roman goddess of the hunt was a popular sculptural subject at the time, but Huntington made it her own. She sculpted an elegant, life-sized nude figure lifting her hunting bow aloft with a dancer’s grace, while an equally-elegant hound frolics at her feet. Huntington’s choice of subject was fitting, as the Academy closely associated itself with this mythological huntress. Diana of the Chase still resides in the National Academy’s collection, while subsequent casts appear in museum collections all over the world.

In 1923, Anna Vaughn Hyatt married wealthy scholar and philanthropist Archer Huntington (1870-1955). In doing so, she joined a prominent family of American art collectors, headed by Archer’s parents, Collis and Arabella Huntington. Perhaps unusual for this time, the marriage only strengthened Anna Hyatt Huntington’s art career. Archer Huntington’s connections helped Anna get work in major institutions. His money allowed her to cast her pieces on a larger scale. The two also collaborated on a significant new project.

As a lifelong scholar, collector, and admirer of Spanish art and culture, Archer Huntington established the Hispanic Society of America in 1904. After meeting Anna in 1921 – and probably before they were even married – he brought her in on plans for the still-developing institution’s building. In 1927, Anna completed El Cid Campeador, a monumental equestrian bronze sculpture of a medieval Spanish military hero. Archer Huntington had translated Cantar del Mio Cid, an epic poem about El Cid, into English in 1907. Anna’s sculpture dominates the Hispanic Society’s Audubon Courtyard. She also created several animal-themed relief plaques for the Hispanic Society.

Several other copies of El Cid also exist, including versions in Argentina and Spain. King Alphonso XIII of Spain awarded Anna Hyatt Huntington the Grand Cross of Alfonso XII in 1929 because of the success of her El Cid.

Archer and Anna Huntington were prolific philanthropists who supported many cultural institutions. They also founded Brookgreen Gardens, a nature preserve and sculpture garden in Murrells Inlet, South Carolina, in 1931. They had purchased the property the year before, originally planning to create a private retreat there. In addition to preserving local plants and animals, Brookgreen boasts a large sculpture garden filled with works by Anna Hyatt Huntington and fellow American sculptors. You can still see many of Huntington’s works there today, including versions of Diana, Joan of Arc, and El Cid, alongside other figurative sculptures in both metal and stone.