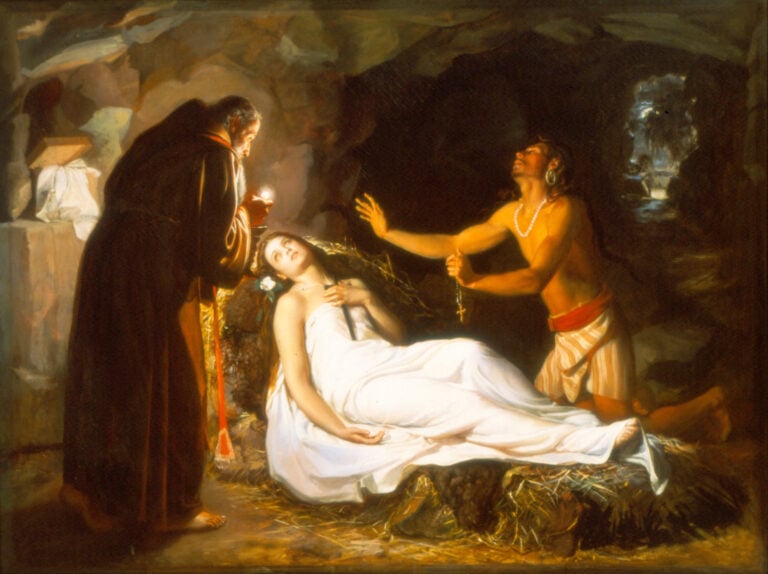 In the 19th century, Europeans went crazy for one story: Atala, or the Story of Two Lovers in the Desert. It is a novel by René de Chateaubriand published in 1801. It narrates the story of a mixed-race young woman after whom the novel is titled, and her lover Chactas, a native American from the Natchez tribe. This novel appeared everywhere, paintings, sculptures, plates, cups, wallpaper, everywhere. Even more, it crossed the pond to Latin America. Now, let’s take a look at some of the works that depict the tragic romance of these characters.

This article was co-written by Jimena Escoto and Alejandra Gabriela Durán Escamilla.

Francois René de Chateaubriand was not an enthusiast revolutionary, not only because he was a royalist, but also because he witnessed the horrors of the French Revolution. Also, he was concerned about the wave of laicism flooding French intellectuals. Therefore, he wrote a story to prove that Christianity and rationality could go together. Moreover, he got inspired by a trip to America, as he fled the violent events in his city. See, Chateaubriand repelled fanatism, both religious and revolutionary. Hence, Atala came into existence in 1801. In fact, this relatively short novel was just a taste of a much bigger project, Le génie du Christiasnisme. Once Atala became a success, he knew his larger novel would be popular too.

When it is said that Atala was a success, it means it became the best-seller of its time. For the people who loved the exoticism of the Americas, this story was perfect. At the same time, there were artists traveling to the New Continent in search of landscapes and everyday scenes. Truly, images of the story were everywhere. Actually, Chateaubriand saw wallpaper illustrating his tale in a hotel! For example, there were plates like the next ones that depicted various scenes from the novel. 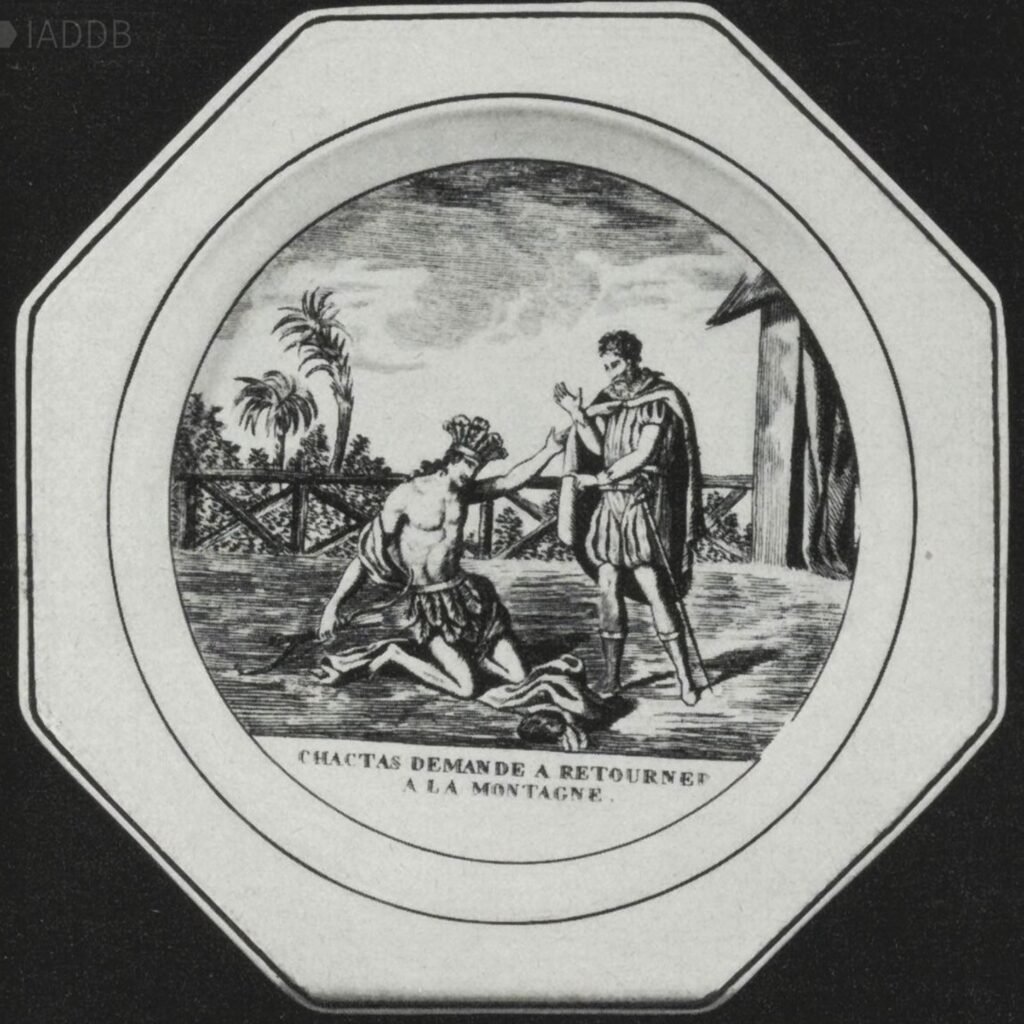 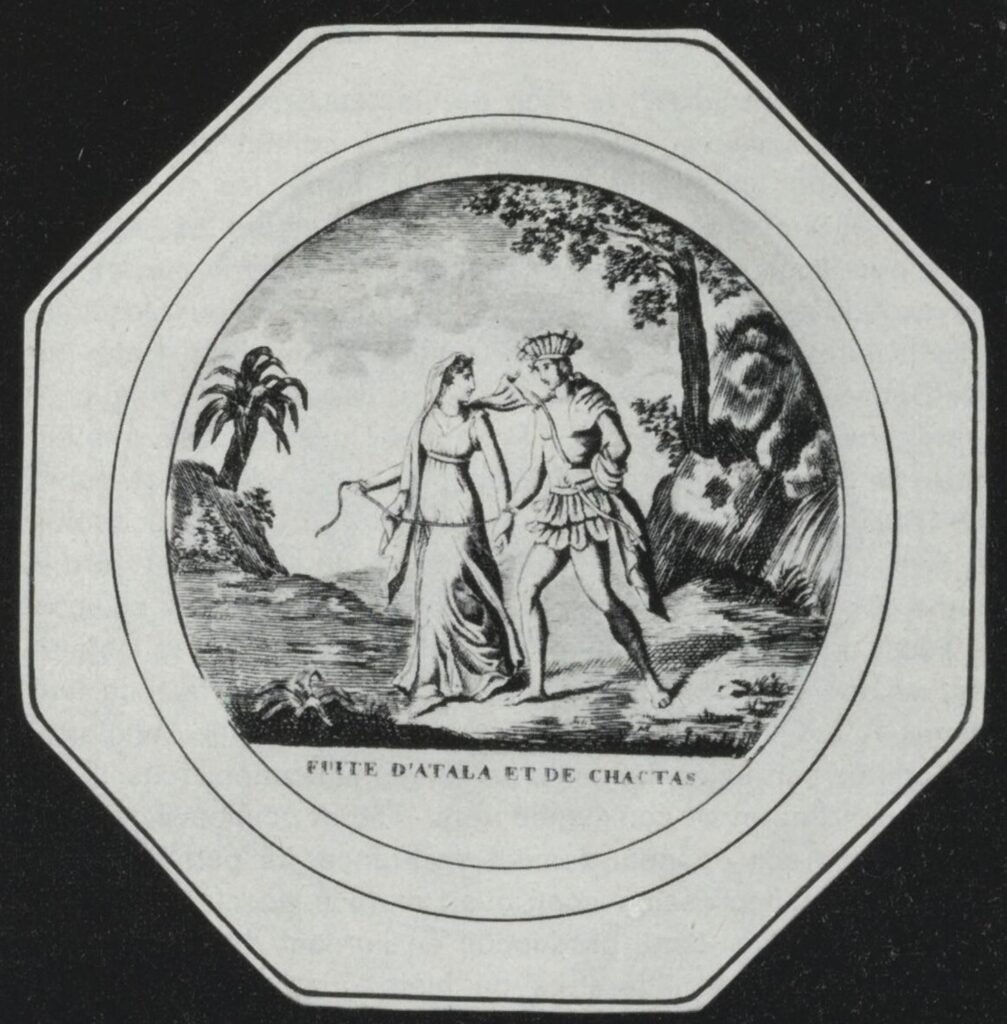 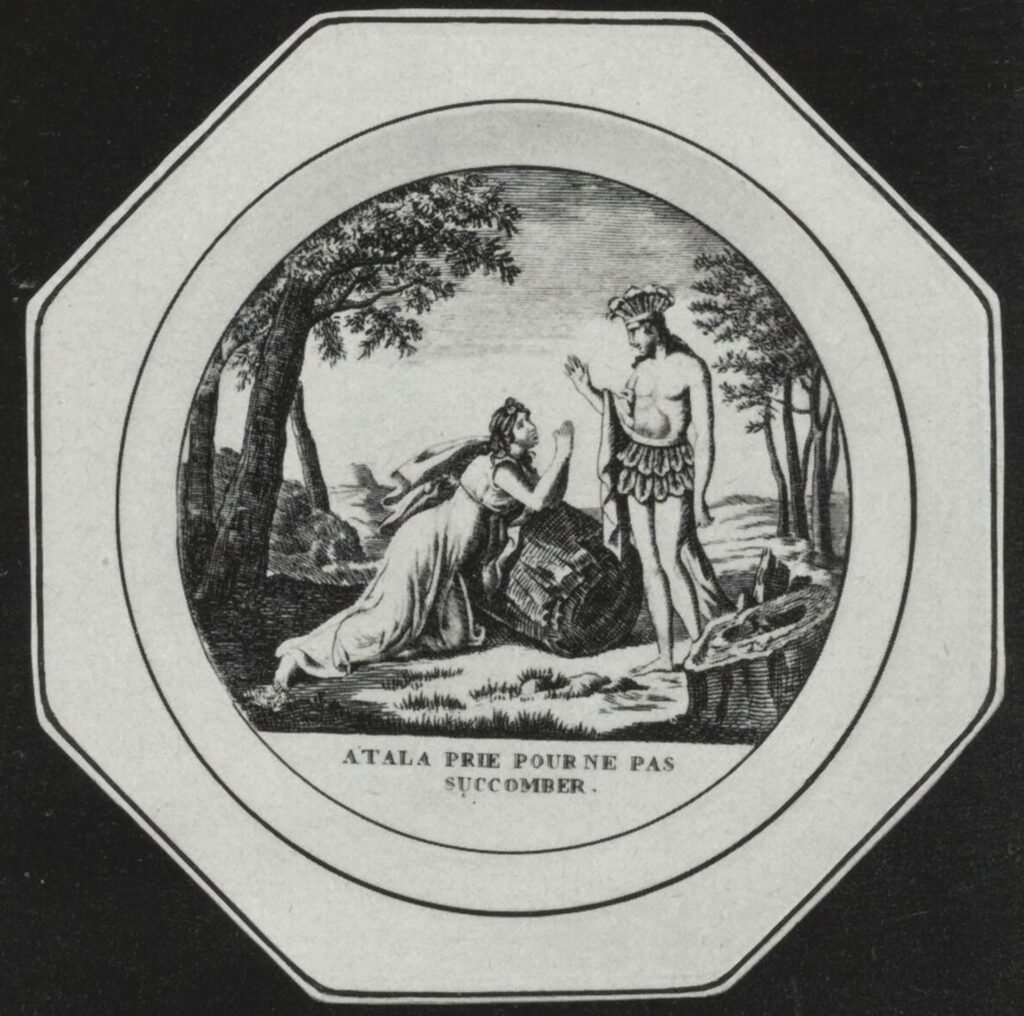 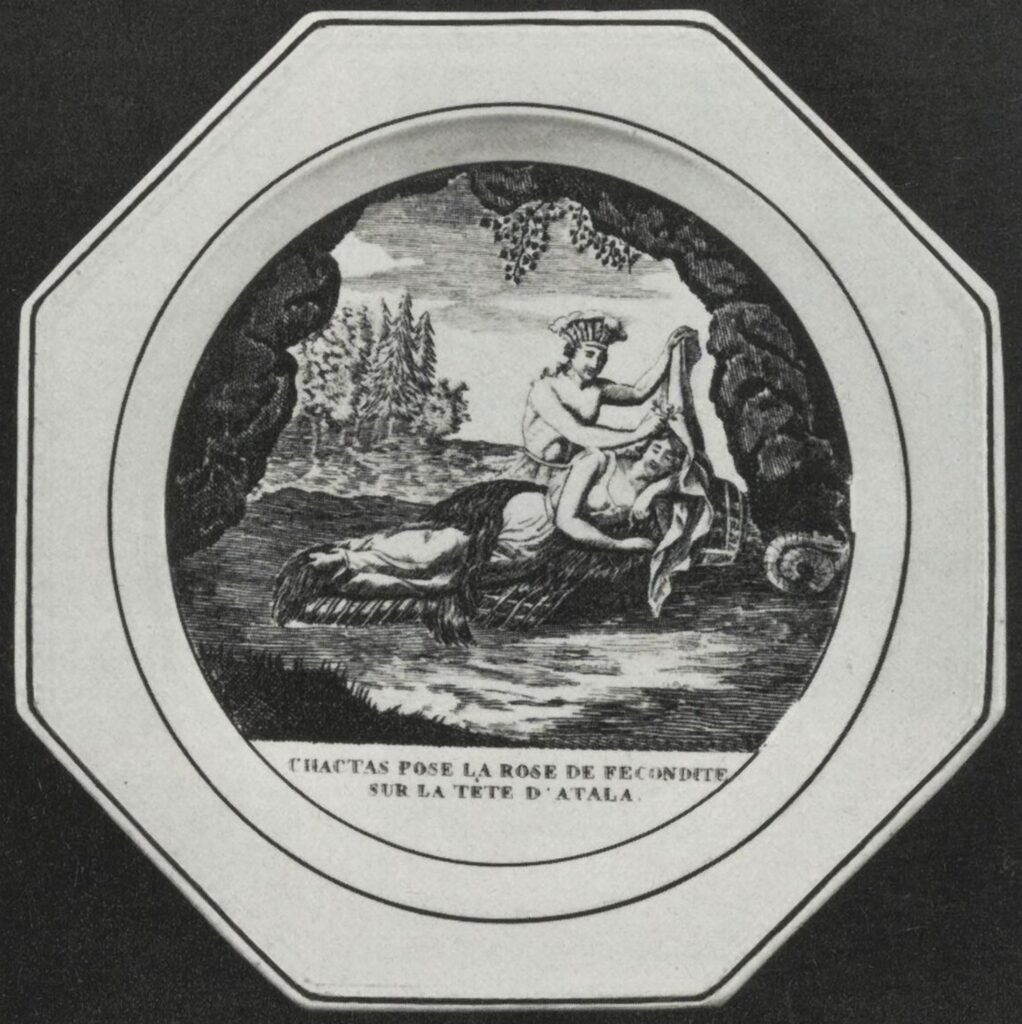 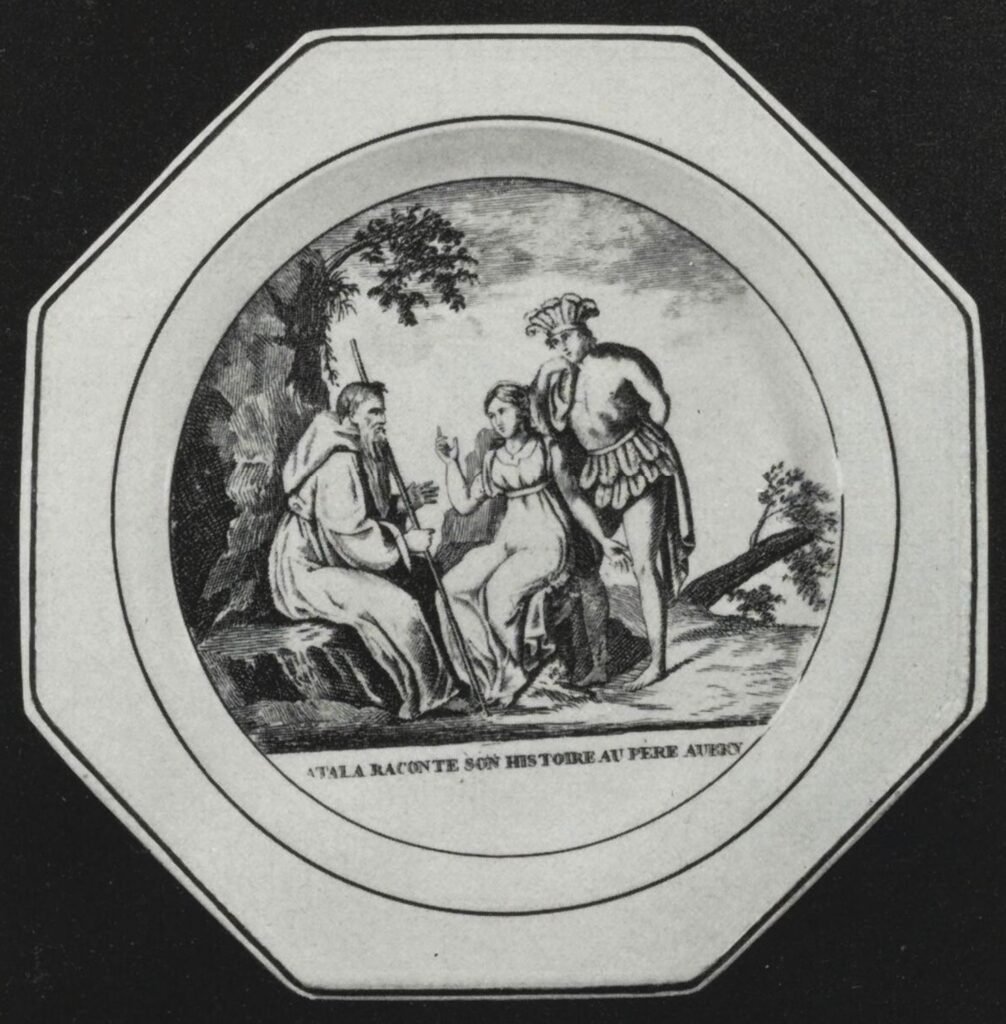 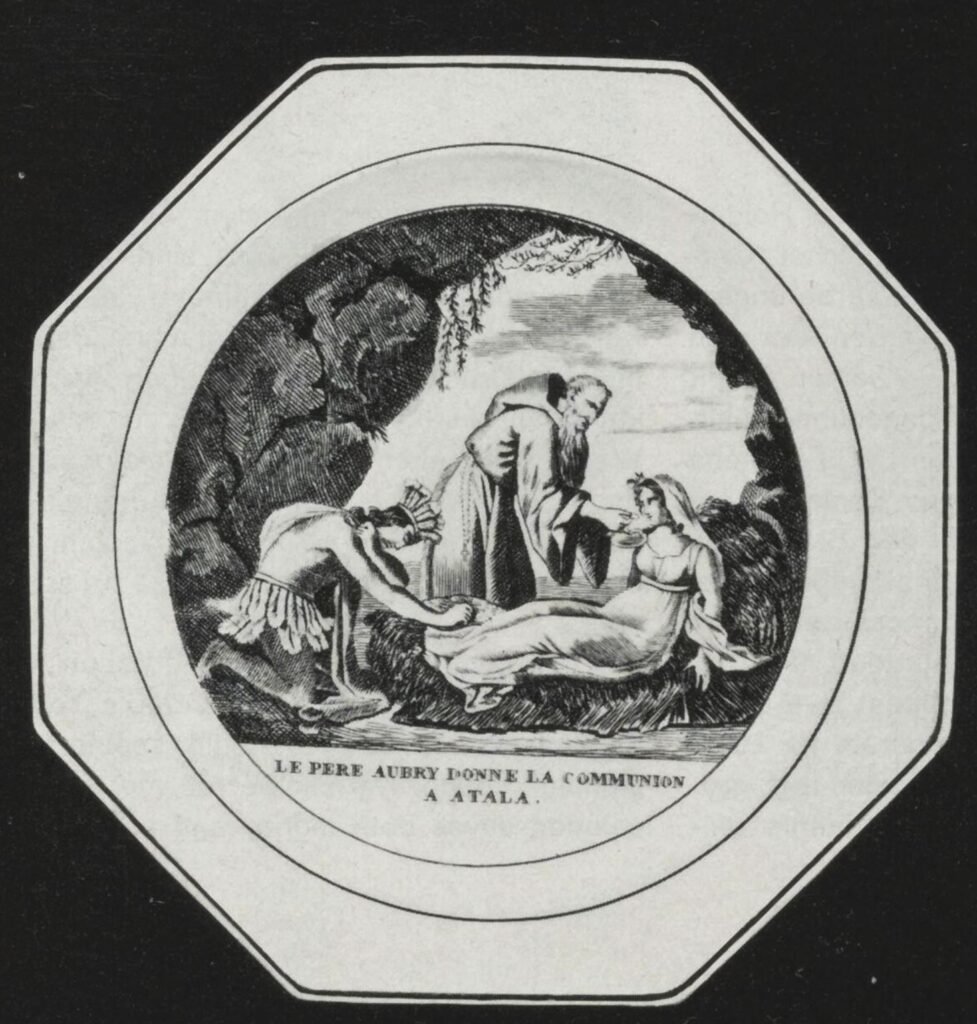 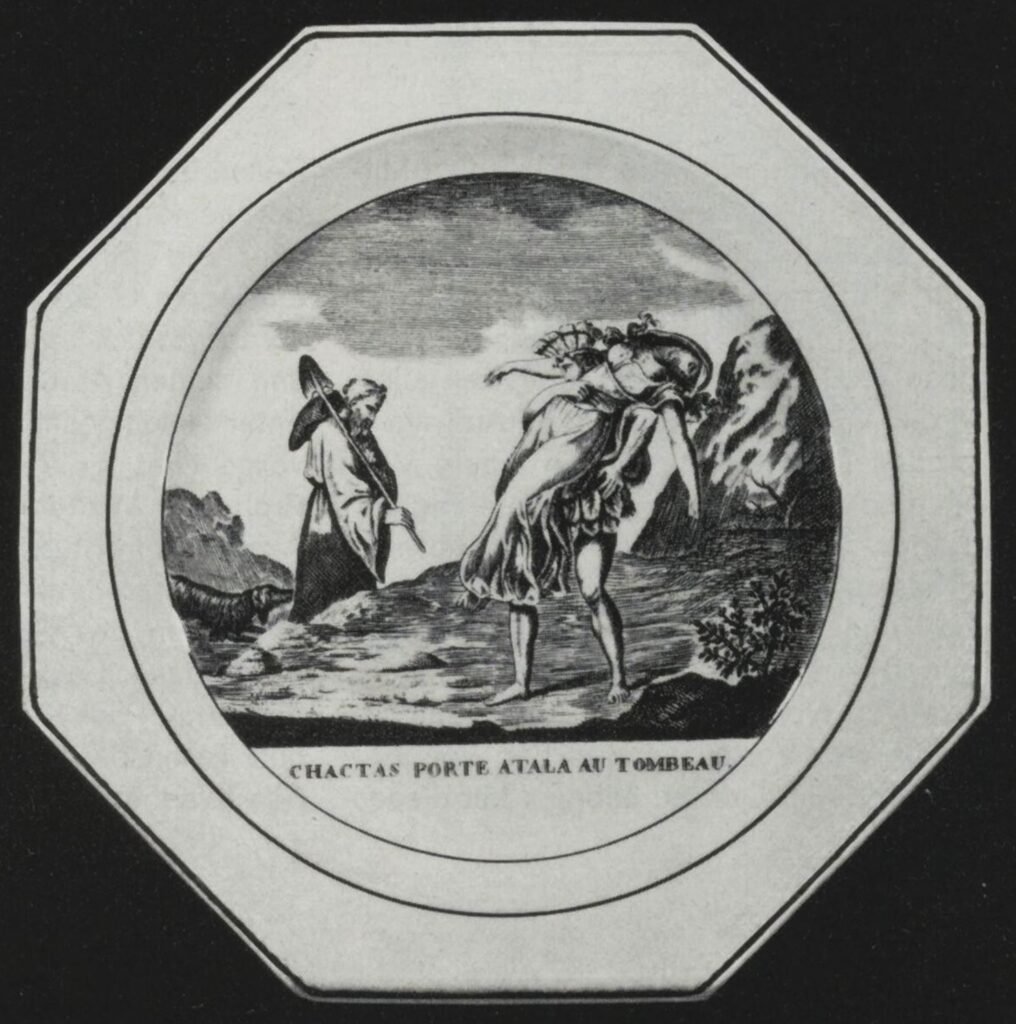 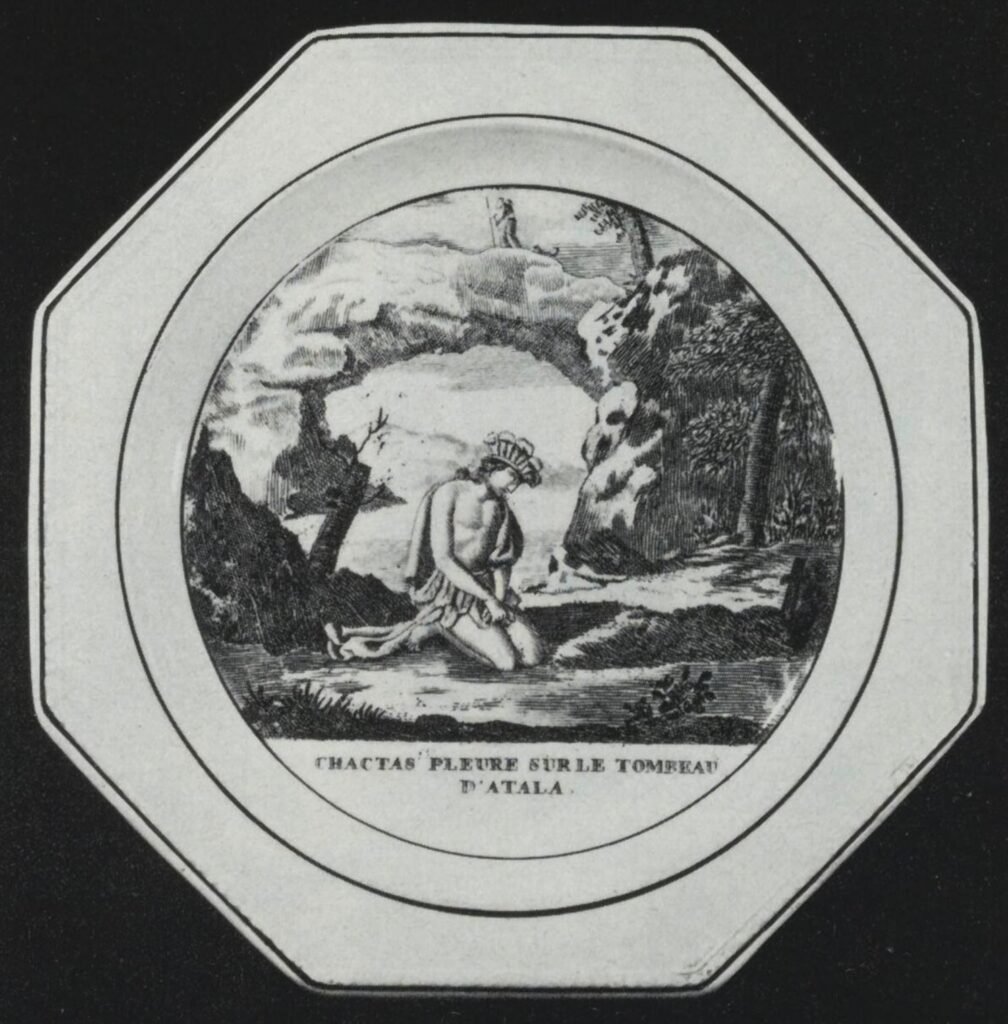 Chactas wants to return to the mountain

After Chactas loses his father, he is raised by a Spaniard. However, he decides to return to the mountains, going back to his native roots.

The Flight of Atala and Chactas

On his way, he is captured by the Muscogees, enemies of his tribe. As such, they condemn him to death. Luckily, Atala saves him and they both flee. It is curious to note that Chactas thinks she looked like a virgin when he first sees her.

Atala prays to not surrender

As Atala and Chactas fall in love, she fears her feelings will make her break her vow. She prays to the Virgin Mary.

She never speaks about it to Chactas, but he suspects she is hidding something.

Finally, they meet Father Aubry who represents the guiding figure towards the true Christian faith. The old man invites the lovers to his cave.

Later, he shows Chactas a community he evangelized successfully, where everyone lives in harmony.

One morning, before going out with Aubry, Chactas places a flower on Atala’s hair that stays with her until the end.

But when he and Aubry come back, they find Atala agonizing.

The young woman does not have another option but to confess her secret to Chactas.

Turns out her mother forced her to make a vow of chastity that prohibits her to marry her love. As she found herself weakening on her promise, she decided to commit suicide and preserve her virginity.

With the truth out, Father Aubry scolds Atala for her ignorance while Chactas cries desperately. She did not have to commit suicide. He could have freed her from her vow. Regardless, he agrees to give her the last communion.

Before dying, she begs Chactas to embrace Christianity and gives him her cross.

Chactas carries Atala to the grave

After that, Atala dies and Chactas and Aubry carry her body to bury her.

The Burial of Atala

At last, Chactas is left alone mourning his love. As promised, he converted to Christianism.

In reality, Atala’s ignorance about true Christian beliefs led her to unnecessary death. Many critics interpreted this as a warning against religious fanaticism. As the old man said,

Religion does not demand superhuman sacrifices.

Another beautiful example of its popularity is this clock, made not long after its publication. Really, by the time this piece was produced, more than ten illustrated editions and translations of the book existed already. In this, we see the beginning and the end of this tragedy. On the top, there is a sculpture of Atala freeing Chactas. In the plaque below, Chactas is carrying her to her tomb.

Quickly, Chateaubriand became known as the epitome of a magician due to the quality of his descriptions. Thanks to this, it was easy for artists to translate his words from the pages to the canvas. In fact, it is highly possible that this was his objective from the very beginning. On Les Martyrs, another novel, he stated:

Cited in David’s Wakefield’s “Chateaubriand’s ‘Atala’ as a Source of Inspiration in the Nineteenth-Century Art”, 1978.

Atala at the Salon

In this light, it is reasonable to believe he had a similar objective with this book. If so, he succeeded. During the first half of the 19th century, more than 50 paintings about one of his works appeared in the Paris Salon, 18 of them were about the two tragic lovers. Most artists chose the most dramatic moments of the tale, her agony, Chactas’ grief, and her funeral. Among them, the most important might have been Anne-Louis Girodet who presented his The Funeral of Atala at the Salon of 1808. The painter was often inspired by literary works and even wrote poems. For instance, in his Oeuvres posthumes (1829), he dedicated some lines to the lovers. Certainly, this novel had an impact on him.

Another curious example is the one by Eugène Delacroix. Interestingly, he did not choose any of the novel’s moments. Instead, he painted a Native couple with their baby as they fled the French army. Therefore, it is not directly based on the book, but on the context. However, there is evidence that he read the book and commented on its author several times. Plus, this is his only canvas set in the Americas.

Naturally, the French did many of the paintings, but Italians did a few of them as well. Among them, Cesare Mussini and Andrea Gastaldi chose common moments, but with notably different styles.

In truth, a story set in America during colonial times was bound to cross the pond. It might sound strange, but to the new Latin American countries emerging in the 19th century, Atala was a perfect model to create their own national literature. As a matter of fact, the first translations to Spanish were done almost immediately. Consequently, regional writers instantly took it as an inspiration. In Mexico, José María Lacunza published Netzula in 1837, and the Colombian Jorge Isaacs’ Maria came out in 1867. Ten years later, Juan León Mera published Cumandá, which also made it into a canvas by Rafael Salas. To different degrees, all of these books have similarities with the French novel.

The story spoke to those societies as it talked about morality concerning women, death, colonialism, and mixed race. Not surprisingly, just as literature, fine arts took European art academies as their model. For instance, in Mexico, the Academy of San Carlos brought teachers from the Old Continent and continued teaching traditional Western techniques. Furthermore, the elite loved the French story, so it was expected that paintings about it would appear. As such, the theme was depicted in an academic way, with its own Latin American mark.

For example, if we see Luis Monroy’s The last moments of Atala, we can notice differences in the depiction of Chactas from its European counterparts. His facial and body features seem more accurate with his ethnicity. At that time, Mexico had just become a Republic after Maximilian of Habsburg’s brief empire. In consequence, for the new liberal government led by Benito Juárez, the idea of a Christianized native was quite attractive. Even more, Atala represented the woman who put her chastity before her desires. Thus, the appealing theme together with Monroy’s talent earned him recognition among his teachers and critics.

Similarly, Chactas is represented more ethnically accurately in Brazilian paintings. One of them was by Rodolfo Amoedo, who chose a similar moment as Monroy, the last communion.

Although Chateaubriand’s best seller is no longer popular, it remains in the dozens of paintings, decorations, furniture pieces, and engravings that 19th-century artists made. Moreover, it is a story that speaks about European and Latin American society, their values, interests, and history. And, it is a prime example of the relationship between literature and art.

Wakefield, David. “Chateaubriand’s ‘Atala’ as a Source of Inspiration in the Nineteenth-Century Art”, 1978, The Burlington Magazine. Accessed 5 December 2021.