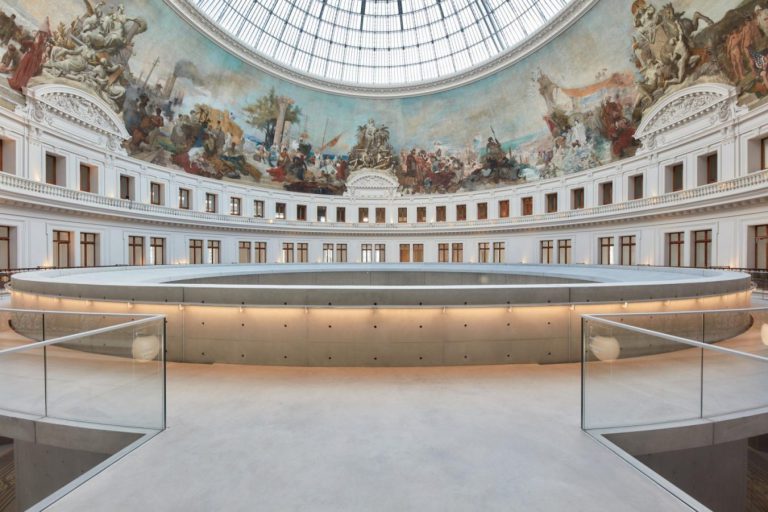 As of May 2021, Paris now has a new art museum to call its own. Located only 500 meters from the Louvre, the Bourse de Commerce Museum is dedicated to contemporary art and holds French billionaire François Pinault’s art collection. After a $195 million renovation, the building that once served as Paris’s commodity stock exchange is now open for visitation.

Dedicated to art from the 1960s to the present, the museum encourages all audiences to open up to art (regardless of experience or level of expertise). The collection is composed of over 10,000 works, featuring paintings, sculptures, videos, photographs, audio works, installations, and performances. Artists such as Mark Rothko, Urs Fischer, and Cindy Sherman are featured alongside emerging artists.

The building itself is a work of art and definitely worth seeing. Originally built in the 18th century as storage for corn and flour, it was later converted into the Bourse de Commerce (commodities exchange). Its circular-shaped design was inspired by Roman monuments, and the column in front of the building is a remnant of the old Medici palace which occupied the space in the 16th century. Over the past three years, the structure has been restored and transformed by Japanese architect Tadao Ando to accommodate the art collection.

“My job was to transform this building into a contemporary art museum, without touching the structure that is classified as a historical monument. (…) The idea was to design a lively space that would foster a dynamic dialogue between the new and the old, which is what a site dedicated to contemporary art should be.”

One of the attractions of the museum is the 1,400m² mural which decorates the underside of a metal and glass dome. It was painted for the Universal Exposition that celebrated the centenary of the French Revolution in 1889, and it has been recently restored. Both the dome and the mural are listed as historical monuments.

Titled Ouverture, the inaugural exhibition occupies the ten exhibition spaces of the museum with 200 works from over 30 artists. In-site projects that were either designed for, or adapted to, the context of the Bourse de Commerce have also been installed in the building. Here are some highlights of the museum’s collection:

In the heart of the museum, Urs Fischer’s Untitled is shown for the first time in France. A life-size replica of Giambologna’s The Abduction of the Sabine Women occupies the center of the Rotonda, surrounded by other wax sculptures. The Swiss artist likes to work with mutable materials that burn, expire, or change in order to work on the temporality of his pieces – and that’s exactly what is presented in this installation. On the first day of the exhibition, the monumental candles were lit, and they will gradually disintegrate over the course of the exhibition. The work that was initially whole will be transformed as the candles burn – it is a monument to the passage of time, metamorphosis, and creative destruction.

The gallery located on the first floor is dedicated to photography, and, until November 15th, it holds a selection of series and ensembles from the 1970s to 1990. Among these, Cindy Sherman‘s Untitled Film Stills is a must-see. This series consists of black-and-white photographs in which the American artist poses as different characters, playing with female archetypes conveyed by and for men. Taken between 1977 and 1980, the images borrow the aesthetic of film stills and of black and white cinema.

Trompe l’oeil (French for “to deceive the eye”) is the term used to describe a painting technique that creates an optical illusion to deceive the viewer into seeing a tridimensional element. Martin Kippenberger‘s monumental painting Paris Bar (1993) is an example of this technique, and it can be seen in Gallery 5 of the Bourse de Commerce Museum. More than 20 other paintings by the German artist are also in exhibition.

Best known for covering everyday industrial objects with a layer of paint, Bertrand Lavier reinvents and repositions objects and images as elements in a critique of consumerism and of the fetishization of the art object. In the Bourse de Commerce, 24 display cases are occupied by objects and forms taken from everyday life and art history in a playful exhibition with Duchampian undertones.

Three photorealist paintings by Rudolf Stingel can be seen in the museum until December 31st. The three portraits were painted from small photographs later enlarged by the painter. Without erasing the defects, blurring or roughness of the images, he transposes them via painting, transforming a small personal snapshot into a monumental portrait. Paula Cooper (his New York gallery representative), Franz West (Austrian artist and Stingel’s friend), and Ernst Ludwig Kirchner (historical figure of German Expressionism) are the characters depicted on these canvases.

A large panel by French artist Martial Raysse occupies the Bourse de Commerce Salon. With acidic and electric colors, Ici Plage, comme ici bas (2012) presents a utopian landscape where a crowd gathers at the exit of an imaginary city. The artist, known for his works with neon lights and bright colours, says that the horde meeting between the beach and the wasteland represents all of humankind.

Located at 2 rue de Viarmes, the museum is open for visitations Monday to Sunday (closed on Tuesdays), and access is free on the first Saturday of the month. The presentation of the European health pass is currently mandatory. You can find more information on opening hours and safety measures here.