The Art of Story Telling: The Abduction of the Sabine Women 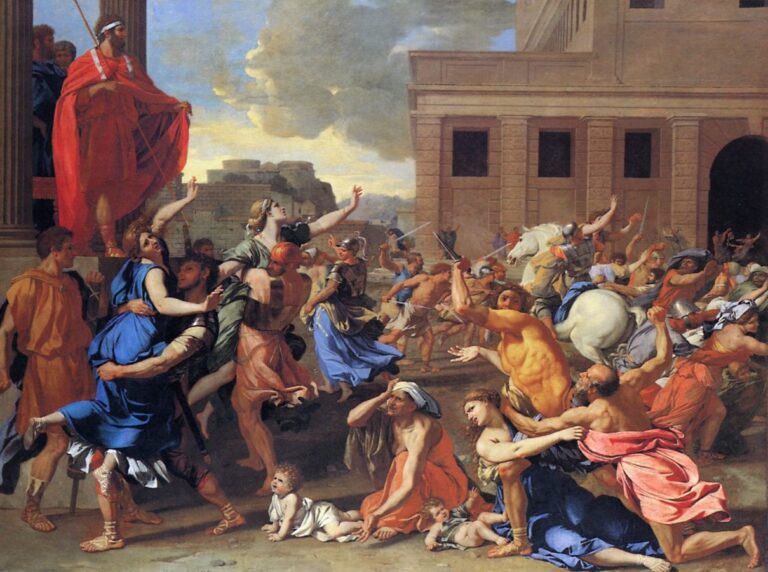 If, as is popularly believed, there are only seven plot types in storytelling it is not surprising to find artists inspired by the same narrative at the same time.  This is certainly the case with the subject of The Abduction of the Sabine Women executed by both Nicolas Poussin and Pieter Paul Rubens in 1635.

The story of how King Romulus of Rome took by force the Sabine women has fascinated artists for centuries and through these two works, we can see how the 17th century passion for storytelling is conveyed.

While both painters tell the story from the moment when Romulus gave the order to abduct the women congregated in Rome for a festival, we immediately notice a distinct difference between them.

Firstly, in Poussin’s work, he uses the foreground to show the actual abduction. The scene may look chaotic with bodies in various poses but a closer examination shows that it is actually well-organised. Each figure plays a part and the poses are ‘statuesque’ and with the ‘perfect’ proportion of the semi naked soldier at the forefront of the canvas. This reminiscence of Roman classical figures links us directly to the background with the building and columns being of a Roman style.

While the composition may make the painting appear static, not helped by Poussin’s absence of brushstrokes creating a smooth and controlled surface, the sense of movement is brought about by the positioning of the figures. We see King Romulus standing high to the left, dressed in the red robes of leadership, as if conducting the scene and with the raised arms of several of the characters all pointing to the centre of the composition, we become more aware of their struggle as our eye is drawn to the centre of the canvas.

This linear style differs to Rubens’ as he uses the planes in a different way to show more of the story than Poussin. Rubens plays with the idea of a scene within a scene by using the background to show the aftermath of the abduction with the two tribes fighting each other. The composition has a symmetry to it, despite the chaos. The central four figures lock our gaze and, as we look outwards, we notice the columns divide the picture equally. The architectural setting is not distinctly Romanesque and the costumes and finery of the women is more Flemish than classical and with a 17th century feel. We can ask whether Rubens was attempting to use this story for symbolic meaning.  Here, Romulus is hidden in the shadows, whereas Poussin puts him into an elevated position, thereby creating a more sinister scene, especially where we note the states of undress that Ruben’s Sabines are portrayed and the way in which his palette is more muted than Poussin’s.

Despite all the differences in painterly style, it is clear that both painters were exploring how to tell a story in their own style, flouting conventions and leading the way in creating reputations.