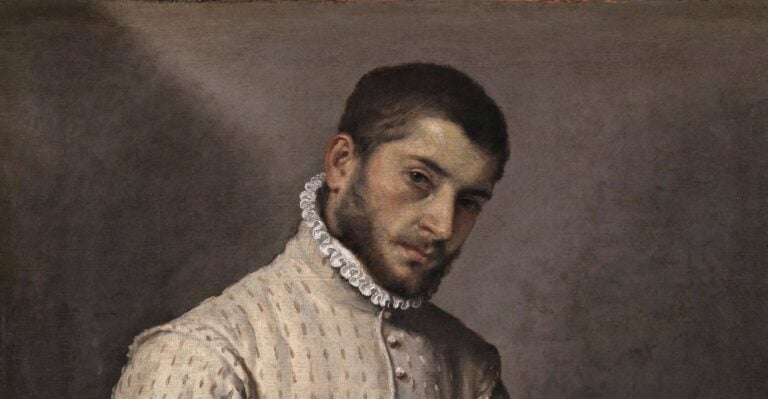 The Tailor is one of Giovanni Battista Moroni’s most famous portraits. Not only is it an astonishing work of art, but the sitter himself is quite handsome (he somewhat reminds me of Hugh Jackman, I’m not sure if you would agree).

Giovanni Battista Moroni (c. 1520/24–1579) worked mainly in Bergamo, Italy, and focused on portraits of the local aristocracy and the bourgeoisie. His works are a very realistic presentation of subjects and sensitive character studies. This approach was uncommon at that time, as portraits served mostly as means of external presentation of power, hence they had to be idealized. Moroni’s portraits seem to be a lot more private.

His works are of outstanding quality and yet his name seems to be relatively unknown, especially when compared with the greatest painters of northern Italy at the time like Titian or Veronese. The reason for this was Moroni’s small circle of patrons, concentrated mostly in Bergamo. After his death, his paintings were still appreciated for their art and skill, but they were often misattributed to the likes of Titian and Veronese.

He was rediscovered by the British in the 19th century, his paintings becoming more and more popular, yet still possible to buy. His fame grew and he was admired by many, including leading writers at the time. For example, George Eliot mentioned him in Daniel Deronda, and Henry James has one of his characters count The Tailor among the six greatest portraits in the world.

The Tailor is an outstanding work of art and it is also revolutionary. As mentioned earlier, portraits at the time were means of documenting one’s power and proving it to the viewer. They served almost as personal propaganda and hence were reserved for the selected few. Here, Moroni depicted a craftsman instead. One who is well off, but still no member of the aristocracy or higher class. Yet there is almost a challenge in his look: he dares us to question his right to have himself portrayed. He proudly holds the tools of his craft—scissors and cloth—an expert enough to be able to divert his gaze from his work and give us a glance. The color palette is limited, but used sublimely, allowing each shade to reverberate and create a subdued symphony together.

When the painting was bought for the National Gallery in London in 1862, the wife of the director, Elizabeth Rigby Eastlake, wrote in her diary “This will be a popular picture”. She was right.