Open to Influences – Arthur Hacker and his Mary with Many Qualities 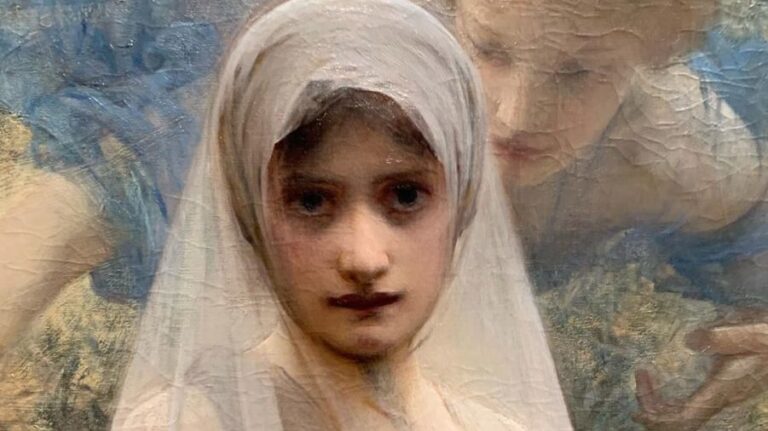 Arthur Hacker was a painter of the late Victorian era. Painting a spectrum of subjects, everything from society portraiture, classical, religious and mythological works, to scenes of peasant life and landscape. His style is too ambiguous to define clearly, changing to suit each work.

The Annunciation of 1892, is on display in Tate Britain, London. Depicting a story from the second century apocryphal text, the Protoevangelium of James. The life of Mary mother of Jesus, is told from before birth to early childhood, and beyond. As Mary gathers water, unexpectedly an angel she cannot see appears. This offers an alternative telling of the story. However, Arthur Hacker chose to portray the young Mary in portrait form, rather than focus upon the angelic meeting.

In person the painting is luminous and haunting. The magic lies in the connecting, lingering impression Mary's gaze makes upon the viewer.

Mary is a vision in white, framed in the centre of the painting. Surrounding her are objects telling of the story. On one side sits her dark clay water jug. An olive tree twists behind on the other. In front is a step, which encircles the pool of water she has come to draw from. Nevertheless, Mary has forgotten them. She looks past them and directly towards the viewer. Her eyes captivate, dark and startling in her small, white, veiled face. Standing tall and graceful she wears layers of soft, floating, light fabric. These robes lend her multiple identities. All at once she is a classical Grecian statue, a goddess, a bride. Authoritative and ethereal, yet tragic and mournful. The fabric enshrouds Mary - you could be in the presence of a ghost.

Serious and sombre Mary rests her hands on her heart. She is aware of something very important happening to her. She knows she has a role to play, and seems humbled to be chosen for it.

In the distance Hacker paints the warm stone walls of an ancient looking city, and before it, a garden. Grasses, flowers and twisting olive trees, offer soft relief to the stone walls. It is a gentle, dreamy landscape, painted in thin looking layers. The brushstrokes blend and melt together in pale, pastel colours. Looking transient and hazy, the landscape seems light by the morning sunlight.

Hovering behind Mary is an angel. Swirling in a blue dress, he floats down from the sky. A gentle and secondary presence, Hacker paints him so translucently he almost disappears into the background. He holds out a lily parallel to Mary. Historically, flowers are symbolic of the Virgin Mary's virtues, therefore employed in religious art and literature. In Annunciations (as seen in many beautiful Renaissance artworks), the lily's' white petals imply Mary's chastity; the golden pollen her radiant soul.

The flower mimics Mary. The long fine stem emphasises her tall, straight posture. One lily in full bloom lines up to her head, its open petals fully reveal the inside of the flower. Likewise, the girl's veil parts exposing her bare face to scrutiny. Lastly, on the stem more flowers await to blossom; a promising of future life, and the role Mary has been chosen to carry out.

All therefore, is focused around Mary, standing frozen in that moment, when normality turns to supernatural. It seems that the world, even the angel, fade in comparison to what Mary is feeling, right now.

Hacker and the Royal Academy, and beyond to Paris

The British Royal Academy impressed an admiration for classical and Renaissance art upon their students. They were taught to work to a set format based upon this ideal. Hacker was a student between 1876 and 1880. Later, he became an Associate member of the Academy in 1894. He was also a professor in the schools, and finally, an Academician in 1910. His Diploma piece for the Academy is surprisingly Impressionistic. A night time scene of Piccadilly Circus in the pouring rain. Atmospheric and majestic, warm lamp light is magnified to an all encompassing halo through the rain. This study is more intent on capturing the effects of light and shade, than the actual location. Suggestive of JMW Turner (a past Academician and painter of landscapes both successful and unique and in his day) and Monet, both preoccupied with light.

Paris was alive with a spirit of modernity in the late 19th century. After his initial training at the Royal Academy, Hacker studied in Paris, under Leon Bonnat. There, and in Europe, some artists looking beyond Academy practises depicted the world through their own eyes. A multitude of movements encouraged individuality, such as plain- air painting, Impressionism, Post-Impressionism, Realism and Symbolism. In Hacker's work are telling influences from these varying movements.

Additionally to international influences, Hacker picked up on English artistic movements that broke with the Academic status quo (like Turner mentioned before).

In The Temptation of St Percival, a Pre-Raphaelite influence is clear. The medieval story is painted in jewel like colours. Hacker pays attention to minute details, such as the knight's costume, and the naturalism of the outdoor setting. Making it entirely in tune to Pre-Raphaelite ideology.

Further inspiration derived from travels, through Spain and North Africa. Afterwards in England, Hacker became a member of New English Art Club, formed in 1886. He exhibited alongside artists such as John Singer Sargent, James Abbott McNeill and Walter Sickert. Offering an avant - garde alternative to the Royal Academy.

So does, he conform or rebel? Hacker does neither. With an open mind he embraces all, rather than choose one way or another.

Hacker's creations feel fresh and sparkling with life. He absorbs old ideas with the new, and elegantly balances multiple techniques. The Annunciation is a shining example. Moreover, it is also a painting composed of opposites. Firstly it is a traditional, religious subject, but taken from an alternative text. Secondly, Mary has a defined, classical look, painted sharply. However she is set against an impressionistic landscape and a mystical angel. And, most effectively, Hacker combines many contrasting qualities in Mary. She youthful, gentle and humble. Yet at the same time captivating, magnetic, and full of strength.

An Art History and Humanities student based in Northern Ireland, a wanderer, and wonder..er.