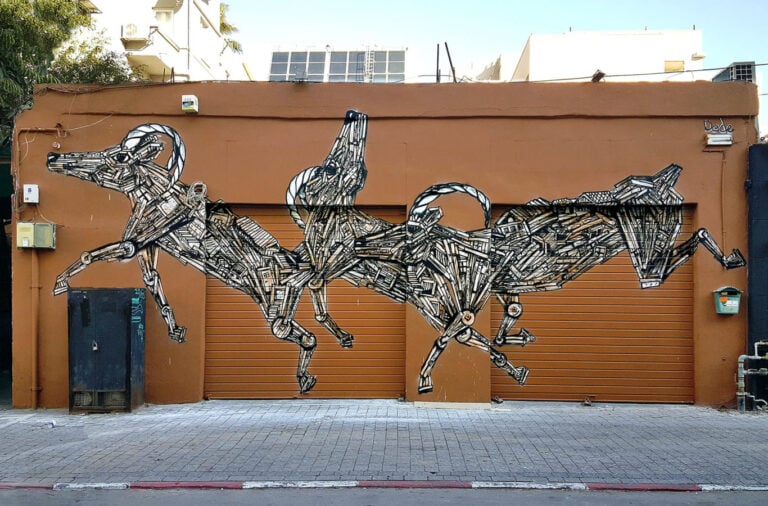 Tel Aviv is home to many great art institutions such as the Tel Aviv Museum. The city also hosts local artists who boldly turn streets into their own art galleries. Most of them work under pseudonyms but due to a particular style or use of repetitive motifs they can be recognized fairly easily. So let’s meet the most intriguing street artists of Tel Aviv!

Probably the best-known outdoor artist operating in Israel today, Dede has been covering walls with his graffiti creations for over a decade. While the inspiration for his nickname is unknown (maybe it’s based on the Dada art movement?), he definitely has a unique style. He paints impressive wood-like animals both in the streets and in his studio. However, he is most famous for his iconic, simple, black and white band-aids paintings. He also sells these pieces online through crowd-funding. Dede often collaborates with another local artist, Nitzan Mintz, who writes graffiti poems.

Perhaps invisible at first sight, Yekutieli’s delicate drawings are scattered all over Tel Aviv. Those who look carefully will find in different corners of the city some skillfully drawn human-like figures wearing stripy sweaters. Like Dede, this artist operates both inside and outside the studio. Working in the Israeli art scene since his early twenties, Yekutieli’s current project is about scars and the stories behind them. In the studio, he creates artworks in a variety of media, from print-making to wood-carving.

Different visual artists and designers joined together to form this unique Tel Aviv-based collective. With the goal to make “down-to-earth culture” in mind, Prettimess often hosts exhibitions in various locations. Although each artist has their individual style, works by the collective are usually colorful and bright.

Nowadays more and more artists base themselves in cities outside Tel Aviv. The siblings Elna and Gab, who are also part of the Prettimess Collective, work together in Jerusalem under the name “Brothers of Light”. Inspired by the rich history of Jerusalem, Elna and Gab defamiliarize traditional imagery by putting it in a new context. Their works can also be found outside of Israel, in countries like Portugal, South Africa, and France.

Sometimes street art emerges as a protest against government policies. In 2002, the Israeli government built a 700 km long wall in the region of Jerusalem, explaining it as intended for security purposes. For the past 16 years, the wall has been separating the Israeli and Palestinian populations and has been criticized by both sides of the conflict. In recent years, this political issue has also taken an artistic turn; both local and foreign graffiti artists started painting the Bethlehem section of the wall. The Separation wall also attracted the biggest name in contemporary street art: Banksy.